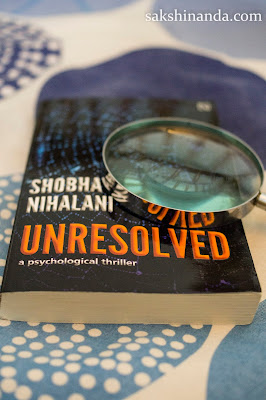 Thrillers have been filling up Indian book shelves for some seasons now. And even though certain publishing houses are rumored to have removed the ‘Welcome’ sign for this genre’s manuscripts, there are enough people daring to write them for a hungry audience. I say daring because they must not be easy to write. To successfully generate ‘thrill’ in a person already bombarded with multiple stimuli (from movies and social media to three-lined terribly tiny tales of horror) must require hard work of a different kind. An intelligent and involving kind. With these thoughts I began reading Shobha Nihalani’s psychological thriller ‘Unresolved’.

When we first meet Maya, the protagonist, she is a seemingly content newly-married woman, finding her bearings in a new house with a husband she assures herself she loves. Deepak tells her that he is a police-officer involved in covert missions, but shrouds all curious questions of hers in insistent silence. She is to continue his wife, serving food and washing his blood-stained shirts. Curiosity, however, gets the better of Maya. Curiosity and … paranoia? Once, ‘what swam deep under dark waters was not her concern.’ But now she cannot help but make it her concern, moving from suspicion to confirmation that Deepak is not who he claims to be. Secret chambers and swanky gadgets, busy airports and psychiatric wards, accidental killers and mysterious calls, rape and ‘popping pills like candy’ make the story steam-roll to the climactic scene, and then there are gunshots!

Was Maya right about her husband, after all? ‘The more she screamed inside her head, the more she moved towards the conclusion that she really had gone nuts.’ Maybe she was, maybe she wasn’t. My lips about this or anything more about the story are sealed!

About the other aspects of this novel …

Shobha Nihalani calls ‘Unresolved’ a ‘psychological thriller’. Rightly so! The author has done an excellent job of doing justice to the form of novel she has written, by being true to the aspects which make it a psychological thriller. There is drama; domestic, disturbing and deadly. There are murders; mysterious, accidental and mindless. And there is action; from inside whispering cupboards to loud bustling bazaars.

But my favourite out of all of them is the theme of psychological horror that Shobha has used as a skeleton for the book.

That “Dissolving Sense of Reality”

‘It was an odd feeling, as if she were dangling from a rope at a great height, upside down. And someone else had control over that rope and would ultimately decide when it was going to get cut.’

When you begin reading the book, you are alone with Maya and her thoughts and in her thoughts there’s always someone ‘watching and listening’. Actually, her self-talk is like a character in the book! Yet, she escapes you. Because she is a woman battling her own mind; working hard to determine real from imagined. Never far from her fears, however well-founded, is the thought that she has suffered mental breakdown once and she shouldn’t trust the voices in her head. ‘Maya suspected something, but she didn’t know what.’ Maya doesn’t believe in herself. Who are we to believe, then? Deepak’s job could just be what he calls it. And Maya could just as well be paying for skipping her pills … with a fast dissolving sense of reality.

Shobha cleverly keeps the unravelling of the mystery at bay, making her readers stand on slippery ground for a while. Even when one card is revealed, there are plenty to keep the hands of suspense ticking. A psychotic wife who is ‘slowly unravelling’ and a secretive husband. Suspicions are forever alive and we’re not allowed the privilege of ‘knowing’ anything that easily, or for too long. Maya doubts everyone. Deepak doubts Maya. And we doubt along. Curiously thrilling start!

The characterization in the book is spot-on, and in keeping with the theme of the book. Deepak, Maya’s husband, has been created so well I could not only imagine every facial expression of his, but I could also feel him getting under my skin, breathing down my neck yet simultaneously lovingly whispering to me to not snoop around. There is something so bleak about their marriage that you want to wake Maya up to the reality of the psychological horror he is making her undergo, and which escalates to gargantuan proportions and deaths as the book proceeds.

Unstable emotional states and the psychological horror they suffer within or wreak on others. That’s what you find in ‘Unresolved’, fitting to the t the genre of psychological thriller and adding high doses of suspense to a story which later spirals into an action-packed (but unresolved) closure.

A complete package for lovers of this genre, if you ask me.

There’s something about Maya …

… which makes her a unique creation.

Initially, she goes about her wifely duties silently, trying not to overstep how Deepak liked things at home to be. Yet, he senses an ‘odd nosiness about her, like she was silently monitoring his movements.’ She has a voice, for she insists that she ‘wants a relationship’ with Deepak, full of trust. And she does have guts, to hide in closets and hear hushed whispers or scratch phone numbers on compact boxes. What she also has is an acute sense of observation, and those details add strength and suspense to the plot. Most importantly, you find yourself empathizing with her when in her mental turmoil she struggles to find confidence in her own suspicions. Shobha has explored and laid bare this character’s psychology that well!

We feel bad, until the second half of the book begins, and ‘like thick gooey black tar, a sense of resentment was slowly enveloping her insides.’ That’s when we stop feeling sorry. Maya has been forced to experience deaths and is slowly metamorphosing. She has gone ‘to the crazy depths of emotion, and returned’ to take charge - not just of how she wants events to unfold but also of her own mind, her heartbeat, her voice, her tone, her sweat and her future. Maya comes into her own, ‘squashing panic to the pit of her stomach’, the moment she walks out of the mental care facility for the second time! And this time, she plots against the perpetrators. For ‘like a snake she had shed her skin, the one that was thin and sensitive.’ She wills herself to hope.

And Deepak? ‘He saw it all, but he didn’t see what she could see.’ Could not see how Maya empowers herself with the same mental disability that hurt the core of her being. That she was ‘always clearing out wayward thoughts so that he didn’t catch any of them’ when they are together. And now the river of psychological horror starts flowing backwards. Same house. Same marriage. Tables turn. Victims change. And guns are pointed in the opposite direction now, till he has to crawl out of a shit hole to survive …

You’re already hooked and then the book does a neck flip, because Maya makes it jump with her new avatar!

There are a few misses about ‘Unresolved’ which warrant mention.

For one, Shobha has a tendency to repeat facts and phrases. For instance, we are told far too many times that Maya’s new neighborhood was much quieter than her previous milieu, question if ‘her mental state affecting her reasoning?’, that Deepak was the 'perfect husband'. Then, skipped words or grammatical slips. You wonder why the editor did not correct the errant ‘went’ to ‘gone’, add some missing articles or convert a few paragraphs of choppy sentences into less-hurried ones.

I am aware that psychological thrillers ask us to suspend disbelief to a certain extent. It is easy to, but the technique fails when a scene seems borrowed from a movie. Creation of Deepak’s workplace, implausible use of psychiatric shock therapy and the final scene of action border on been-there-done-that, especially because the rest of the book does not. Also, Maya’s father seemed an unrealistic cardboard cutout of men who believe their daughters’ husbands more than their daughters. How Maya acquires a cellphone in the thick of things and why she, a sufferer of mental illness, calls her creepy house-guest ‘psycho’ befuddled me too.

Nevertheless, Shobha Nihalani’s ‘Unresolved’ has all the ingredients that a good psychological thriller enjoys. The linearity of plot works well to unfold it, gradually, like peeling an onion. Do be warned that while the characters play mind games with each other, Shobha does the same with her readers. The book will make you a suspicious person, and you may get obsessed to read it to the end in one go especially because it is not needlessly convoluted.

What 'Unresolved' will also do is show us, as if from a secret camera, what transpires in abusive marriages inside bedrooms which look lovely from the outside, sitting snug in lush gardens and among blooming flowers. And the solitary darkness in which those with psychological illnesses struggle to survive will leave a lasting impact on you.

The best from Shobha’s pen, yet.

'Unresolved' by Shobha Nihalani is a Hachette publication, 2015.

[This review was commissioned by the author. Views are my own.]
Posted by Sakshi at 04:43