Everybody has their own definition of Indulgence. For some, it’s busying themselves with their hobbies, and for others it’s about exploring the world and finding their true selves. You know, long drives in their beloved cars! I must confess, though, that there are moments when Indulgence seems like the very reason I wait for the 1st of every month. Pay cheque time! And food, (good food) served at beautiful places brings out the best in me. The best black dress to wear, a limited edition car to transport me, and a most exclusive culinary experience at the end of it. Sigh. Somehow, the mundane makes way for a lovelier world when you accept how divine indulging yourself can be. Here are five fine food places in Delhi for finding it!

1. Tamra, at Shangri-La’s Eros Hotel - Tamra is a ‘world in your platter’ place, offering Asian, Japanese, International and Indian fare, straight out of its five interactive live kitchens. It's fun and vibrant.

2. West View, at ITC Maurya –The exquisite view and the fine variety of mouthwatering delicacies make West View a must-go. But better be a proper meat-eater if you’re coming here. The European style menu is focused on meat dishes and all you need to do is pick your meat cut and how you want it cooked. For the rest, get here in style lay back and enjoy the scenic Delhi range.

'Oh! My Name' is fabulous 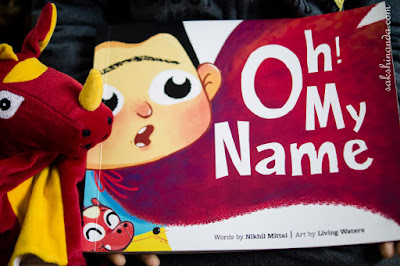 Children love to own things. (So do adults I know, but let’s not go there!) The little ones want to be proud possessors of things they enjoy, can boast about and later stack and add to their burgeoning numbers. There is always a wish-list on display under the fridge magnet and another one ready to be scribbled after the best friend’s birthday gifts are opened or inadvertently an advert for the latest in children’s goodies watched. (You should have caught the TV remote in time!)

They just want! They know what they want and how they want it. Only sometimes they may know why they want it. Nonetheless, they want and that’s explanation enough. And you, loving parents, need to give, or to put it in the blackmailer’s language, provide. But wanting and getting isn’t always so bad. As a parent nothing makes me happier than my child asking me for books to read, for instance. It is a “demand” I love to meet and never argue against because I always feel like I’m pandering to my childhood love too as I cater to my child’s. Plus, it’s a great first love to have. Books! So be it book fairs or book shops, jumble sales or Children’s Day coupons, this mother hunts for good books with a zeal which she doesn’t even show for good food. Ahem.

So, what is a good Children’s book according to me? One which excites them, frees their imaginations, makes them feel, makes them question and maybe makes them learn a thing or two about their world, about gentle manners, values like team work and Quantum Physics, why not? They grow up so fast! And these days, academic pressure... Sorry. But you get the idea. That’s a good book there for me, minus the Physics, that is.

What is an even better book? A uniquely personalized book. No, not one which simply copy-pastes your child’s name in place of Prince Charming but something like ‘Oh! My Name’ by Nikhil Mittal, which takes personalization to a level beyond mere labeling. It’s a concept which instantly caught my attention and later my appreciation for how it involves tiny readers.

When I ordered the book online, I was asked to write a Dedication which would actually be printed in my copy of the book.  You could write anything under the sun and over the moon, addressed to your child and signed off with your role of ‘Papa and Mama’, or whatever your relationship is with the kid you are ordering the book for. I thought it was a great opportunity for me to give him my list of Life’s 10 Most Important Lessons but his father disagreed. So a sweet little wish for his dreams to come true it was to be. This idea of creating a dedication not just personalized the book but also added an emotion to the giving of the present itself. The printed words making owning this book even more special. 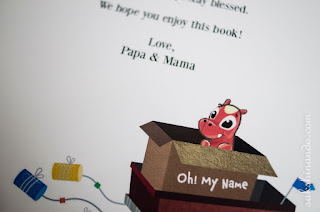 But it doesn’t end there, the promotion of a lovely ‘this is my book!’ sentiment.

‘Oh! My Name’ makes your child a part of the book. Literally.

This is the story of a boy/girl who has forgotten his/her name and is looking for it. The name is put together letter-after-letter and page-after-page in an adventurous tale. The wonderful twist is, your child is the protagonist of the story and it is he/she looking for the name. No surprise then that it is his name spelled bold and bright in white at the end of the tale!

The boy in my book, with a unibrow and wearing a red cape, meets different creatures as he journeys ahead. His friend and ‘ally’ Dabi goes along; a favourite toy magically turned real. With expressions of bewilderment and wonder, he meets some animals that he knows and some fantastical creatures like Ila Pika who he is happy to now know. Everyone gives him a letter to take along, in return for what goes on. What goes on is a secret I’m keeping!

The story is brought alive with big and beautiful illustrations in a book which is printed on a wide landscape format and is super easy to hold. The story is brought home in a child’s mind with its rhyming sentences and simple expressions. Invented sound words like ‘Ho Ho Hokeya’ make reading aloud fun and some conversations are bold and big to be read even louder, perhaps. 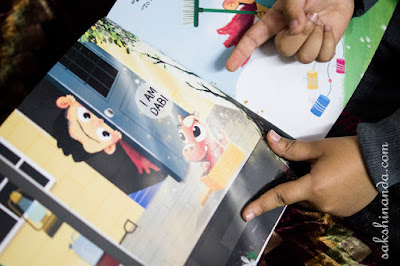 There are lessons and messages gently tucked inside the story, without making it sound like school curriculum. Each tiny episode of meeting a different creature makes the boy in my book make the boy reading it learn something. Take help when you need it, but don’t forget to lend your helping hand when another needs it more. So if in the first part it’s the boy taking help, in the second he has learnt to help back. Both appreciation and gratitude abound, along with thank yous and awards. Dabi, the magical toy, stands for that magic which shows itself when you most need it. It tells children that friends help. Strangers become companions. The universe comes together to lead you on to happiness. Even a snake can give you something that ‘will help you make progress.’ The important bit is to move onwards. And even more, to know yourself. But for now, your name would be enough.

‘Oh! My Name’ is great for pre-schoolers who are just jumping into the sea of phonetics as well as early-readers. This book will certainly make them identify the letters of their name, in the correct sequence at that. Of course, adults will have to help them read the rest of the book. It can make for a good first introduction to many animals too! Words like ‘Organic’ and a picture of Shakespeare made my reading session with my five-year-old digress into unchartered territory. Even more fun! The mystery keeps them hooked, even if the older clever clogs realize the spelling of the name rings a bell. So if by the time NIS have been found and Nishad guesses it’s his name, how the rest of the letters will appear in the story keeps him reading on. For those who don’t make an effort to start putting the letters together as they read, well, the book holds a bigger surprise then! Who says being lazy is bad, huh? 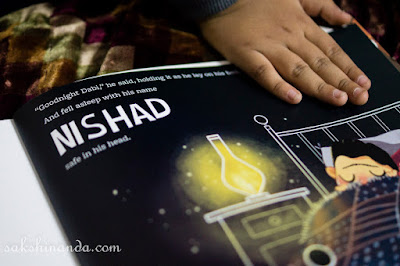 There was one thing though, in NISHAD’s story that caught my eye. The transition from I to S, only, seemed like a jump. If the book is created by stringing letter-episodes together, it should be seamless. ‘The boy was looking at a creature’ could begin ‘Just a few steps ahead…’ for example. That would help maintain a continuity to the journey. However, such nuances are for the adults to notice in their boring grown-up critical worlds. Children don’t have time to waste on such nitty-gritties. All mine had to say when I asked him about it was ‘I don’t know what you mean. I only wish my name were very loooooong’. Request denied, of course.

While ordering the book online I could read the complete thing with just a ‘tap to open’. Just a sample page as preview would have been enough, or it takes away the charm for adult readers who love tales written for children. (Pssk! It did make me create one in my name to read.) I also found out that the same letters in two different names have same episodes in both books. But repeat letters in the same name have different episodes. Which means multiple stories have been created for the many letter combinations. Which also means siblings with common letters in the name will share a little more than just their parents.

What if siblings could become characters in the same book, looking for letters of their names appearing all jumbled up? Fighting to own the first shared ‘A’ or ‘I’? Oops. Sorry. I digress there.

‘Oh! My Name’ is a lovely book created with much thought.  It came along with a muppet of Dabi, who has now occupied pride of place in my child’s bed. He felt immense surprise followed by interest and joy on receiving and reading this story which brings together the real and the magical. A real him in a magical story! The tiny adventure in this good-looking book is very personal and at the same time very important too. Because what’s in a name? A lot, especially if it belongs to a child. 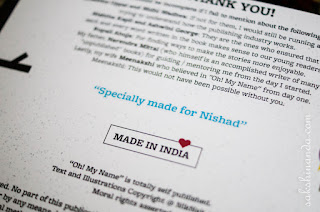 [Review was commissioned by the author. Views are my own.]
Posted by Sakshi at 04:38 36 comments: