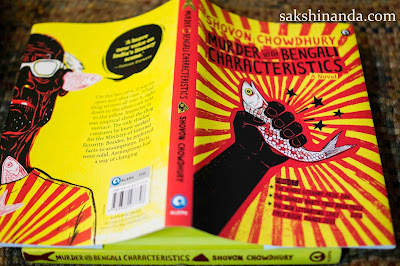 Shovon Chowdhury’s ‘Murder with Bengali Characteristics’ wears a spectacular jacket. In the dark it glows. In the light it reminds you of Mithun da’s hero uniform, but that could be because there’s ‘Bengali’ on the cover and fish all around it. The red could also signify a certain political party, or bloody murder which follows close on political heels, especially if we are to believe what the blurb says about the story.

This novel, it says, is ‘gripping, wildly inventive and laugh-out-loud funny’. I took this as method in all the madness that ensues. And I will tell you if it is indeed all of that.

It is the future, many years beyond 2021, and the Chinese have taken over Bengal (You heard that right).

‘Calcutta had never been nuked, and had kept it that way by inviting in the Chinese. It was ten years since the war. The Indians had rebuilt New New Delhi, but the area where Mumbai used to be was still radioactive.’

Now, ‘the black-and-red flag of the Bengal Protectorate has a silhouette of the Poet Rabindranath with his hand on the head of a tiger. It was the only flag in the world featuring a beard’. Bengal has transformed from ‘British to Communist to Chinese, with little bouts of anarchy in between.’ It is now under weepy Governor Wen’s rule, who wants the people to ‘fulfill the Chinese Dream’. India is a bordering half-country and the Competent Authority, its ruler, is busy provoking hostilities with China. There is a rising threat of war…

In the meantime, Inspector Li is busy solving the mystery of a teacher’s murder, in a village near Calcutta.  Who could have killed Barin Babu? The New Thug Society, religiously determined to free Bengal from Chinese oppression, under Amalendu Lahiri? Resurrected members of the Bengal politburo, who are stalking the land? The CPI (Marxist) leader Bijli Bose? The Maoists in the jungle (still), led by Debu? Also around doing something is Verma, the mining magnate and Agarwal, his assistant. Crazy Wu, the Information Officer working underground, loves chocolates and is helping Li, somewhat, but Propagandist Wang wants Li to stop.

Law and order remain the missing ingredients in this geo-political soup served in Bengal. But what to do? All fish have been caught in a racket, and so Bengalis are out on the roads! Also in this highly invented milieu drones deliver electric shocks to make tardy sweepers sweep faster. Paper is old-fashioned. Magazines blare and speak. Telepaths are reading brains. Cars fly and have tentacles to attack or defend or cuss.

What you see is a brand new world in a brave new novel. Change. Everywhere.

Its sudden onslaught left me confused, till I made some notes to keep track (you, dear reader, may just c.f. to my review. You’re welcome).

What about Bengali Characteristics. Can they change?

Of course not! Shovon agrees.

‘It was a Calcutta thing. They lived in a world where time had no meaning.’

The air in Calcutta is still ‘full of smoke and intellectual banter’. Men like Phoni-babu still carried ‘a deep aversion to work’ and everything is ‘always about politics.’ Agarwal says ‘Bengalis are very excitable, sir. Historically they have caused many disturbances. Traditionally their attitude is poor. Right from Mughal times there are reports which confirm this,’ and the current situation confirms that’s still the case. Calcutta’s walls are still covered in writing. ‘It was how the city spoke. Like its people it was talkative.’ And most importantly, the Bengali love for books still remains the best sign of a ‘very cultured … thinking person.’

The world created in the novel is so different it will take us sometime to lend it reasonable plausibility, yet there’s much in this Bengali setting that is timeless. What? Why, “Bengaliness”!

Shovon Chowdhury is a man of Satire. The proper wala satire and not its puerile versions out to offend. ‘Murder with Bengali Characteristics’ is a superb socio-political commentary which uses wit and LOL humour to draw attention to the follies and vices that define our country’s masters, and us as its people.

‘An impractical idealist’, a sincere, hard-working man who cleared his files in time and aimed to teach kids the good changes the world needs, has been murdered. Sad. So sad. But, you are meant to roll with laughter as you read what comedy transpires around this mysterious death. Shovon’s satire is all-encompassing and omni-present, sparing no rods and making you laugh, quite like you are laughing at your own self. Uncomfortable? Yes.

Each character you meet will remind you of a political leader, or a film star, or even a chief minister. You’ll be putting faces to names like Bijli Bose, Junior Khan of Kolkata Light Striders or Pishi who is ‘ebhrywhere!’ and ‘nebhar difited’.

‘She was once a tall leader of Bengal, although size-wise she is very small. She is a fighter. She is not scared of anyone, except Maoists…If you require gadar, whatever the opposition, there is no better candidate. Unfortunately she is currently in a mental institution.’

They will seem familiar, these characters, from prime time or trending on #scam, but they remain uniquely created entities in this mad, mad world. After all, we’re way beyond 2021. These guys you are reminded of ought to be dead by now, ought to be, no!?

Too many familiar bells will ring in your head.

‘Clean white dhotis … for goons to hide behind’ are still in fashion. The Public Security Bureau is ‘like Scotland Yard with lathis, and a greater tolerance for paunches.’ Crazy Wu, the information Officer, spent all his time ‘making knowledge disappear’; suppressing reports, comments, paintings, memes, and ‘anything that contained the wrong type of thinking.’ If you hear gunshots in a distance, know ‘it’s just the students’ union. It’s election time … they use country revolvers.’ There is also an A-card, which the government uses to locate anyone any time they want!

Favouritism still abounds. Why else will an umpire of a match the principal of a school is playing turn out to be the principal’s cousin? And thanks to the ‘jiggery-pokery with the admission procedure, nowadays it was all somebody’s nephew and somebody’s grandson’.

Crime is aplenty, though naturally grows ‘some amount of adjustment between goonda class and police people.’ Organisations which murder have registered offices – ‘how religious people work here. They are a vital component of society. They are protecting the sentiment….their leaders are well respected in society. Chief Ministers have tea with them. Police commissioners hold open then car doors…Some of them become Ministers.’ As for the thugs, ‘they’re upper-class Hindu type. Their work is never finished. Driving backwards always takes more time.’ (Those familiar bells in the head becoming gongs, yet?)

But be as amazed as Crazy Wu to spot ‘Honest men in the Party! Who could imagine such a thing?’ Financial deficits are not improving, but so what! The ‘accuracy at estimating the deficit has improved by over 22 per cent.’ Are these two the only rays of hope in Bengal Protectorate? Write to me if you find more.

Shovon’s imagination has run wild to create this setting, but even then it could not step beyond the contemporary political reality we are surviving. Is he saying then that an unchanging continuum exists, of human vices, mindless violence and utter silliness, the effluents from which will flow right into our not-so-near future? So while we may have automatic maids, and speaking visiting cards, common sense and humanity are hard to manufacture – for VIPs and for the aam admi.

He could be saying that, really.

Here I give the fancy jacket a re-look after reading the book. I enjoyed the satire and relished the funny moments. I rest impressed, I do. But did the story per se in the book come to me full of suspense, gripping my insides with curiosity enough to follow Inspector Li from one suspect to the next? No. Two reasons:

One, the entries of various characters are so convoluted that if you have read this review carefully you will know by now that I had to make notes – of who is who and doing what and is Big Chen and Sexy Chen  the same person. Perhaps, a key at the beginning of the book would have been good, for us slow ones, who never before imagined a China in Bengal. Totally our fault!

Two, at all points in the novel, tongue-in-cheek satire and mood for fun surpass in prominence the peak points of twists and turns in the narrative. You are enjoying Shovon’s social satire and wit so much you forget that actually this is a novel, which has a story and a thick plot and a victim and a murderer. But, even though you may have a frolicking time while you’re at it, you feel no urgent need to know what happens next!

Books like ‘Murder with Bengali Characteristics’ are rare. They fool you with the fun and games as if they were written over a plate of hilsa and two smokes. But, they come from acute observation and understanding of ‘things as they stand’.  Shovon’s insight about how deep the pit of dung in which Indian polity drowns is spectacular. Without sounding like a cynic on a prime time news panel, he has told us exactly what stink tomorrow holds for us, and especially if we continue to murder the Barin Mondols of the world.

In the end, one wonders what he thinks. Does he agree with Pishi that ‘Rebholushan! Neshan requires eet!’? Or, bemoans with Governor Wen ‘How is this the City of Joy? Where did all the joy go?’ Or, is he giggling at his writing desk, repeating the jungle guide’s ‘It’s all theatre!’ slowly nodding his head?

A book for all ‘common pipool’, and also for the ‘bold and visionary, thanks to IAS training’!

'Murder with Bengali Characteristics' by Shovon Chowdhury is published by Aleph Book Company, 2015