Book Review – The Patna Manual of Style by Siddharth Chowdhury 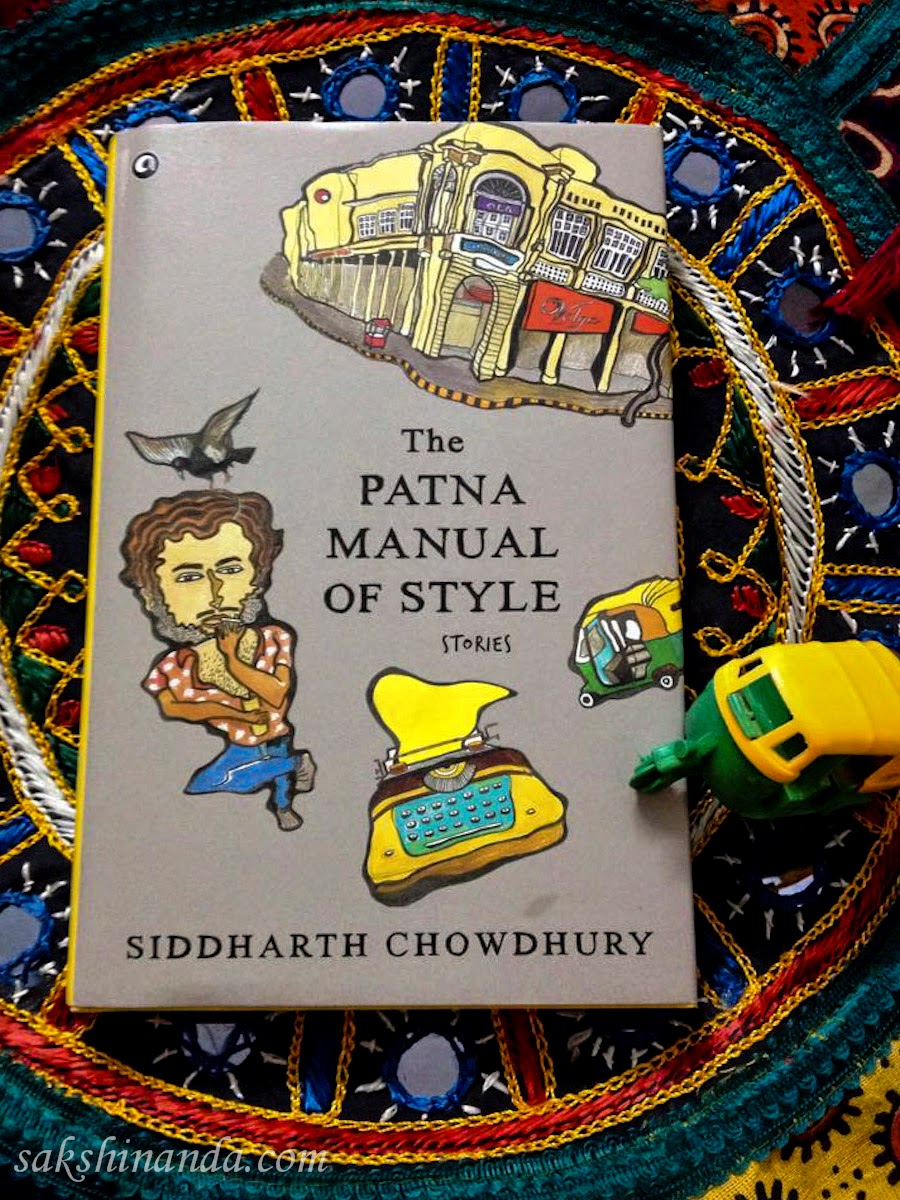 ‘Go to any party, in any country, on any moonlit terrace of the world, the best dressed man is the one from Patna.’

If you just said ‘Gosh!’ and rolled your eyes, then clearly you are not a vain, upper-class man from Patna but exactly that from some other city. But if you agreed, you’re as defiant an upper-class as Siddharth Chowdhury from Bihar is, in his book ‘The Patna Manual of Style’ and probably otherwise too. While I need no more empirical data to prove this author’s unsentimental observations and social bearings (because the nine interlinked stories in the book have spoken) I still wait with bated breath for someone to give our cuddly Laloo ji the ‘Best Dressed Man of the Evening’ award. Sash and crown, included.

However, let it not be the ‘affable Harish Trivedi from Allahabad’ doing the honours, mentioned in one of the stories in the book. You see, we go back a long way and specifically to an Indian Literature class in MA, Delhi University, where he caught me “not paying attention” and immediately asked me the difference between an Act and a Scene. Which I knew, of course! I was a good student, that way, just not interested in too much formality of education. Oh! The academic memories of Arts Faculty!

But what to do. From publishers' Daryaganj to tipplers' CP, Dilli University to gin-drinking arty fraternity, it took Siddharth's stories to walk me backwards to days of rented accommodations, quarter bottles of Old Monk for toasting new and ex flames and Doordarshan’s ‘garaj ke saath chheente’ weather reports. We were students and interns. The century was about to flip. Those were the days.

And those are the times Siddharth has brought alive in the book, with a penchant for detailing with such vivid strokes as would make you taste the ‘life-affirming fare’ that Delhi’s street food is, especially Patna Large at Yadav ji Litti Centre in Paharganj! Our very own Pragati Maidan and its humble movie hall with ‘twelve-rupee tickets’ was God’s divine grace on days of  a ‘borrowed budget of 150 rupees for the date’. Holi in DU meant ‘thandai laced with Azadpur Mandi bhang and Blue Riband gin and Limca’, a Bihari in DU meant at least four attempts at the Civil Services and a Cottage Emporium sari with ‘big red bindis on their foreheads for target practice’ meant a Prof! Reading that it was no ‘big disgrace’ missing making the first division by 2 per cent in English Literature calmed me and the mention of Prem Studio in Kamala Nagar reminded me of the guy at the counter re-endowing a woman candidate’s election bust and doing God’s own work with his bare hands. (She won!)

You see all this through the eyes of a handful of characters, who are talking to us in each piece, making the book a series of first person narrations. While each character, by-and-large, has been given a particular style of speaking, you cannot help but see Siddharth as the ventriloquist. Such is his reign over his extremely interesting characters and such the strength (and the weakness, perhaps) of his writing style. Out of all of them, Jishnu da, the ‘importer of blondes’ and screenplay writer of 'fuck movies' with ‘diaspora experience’ is the most memorable; not just because of a lovely twist-to-the-Anna-Kuchma tale but also because he’s ready to ‘do dharam-parivartan and call myself Johnny’ because ‘this janeu is not made of cotton but copper. It is cutting into my skin’. All for love! The proofreader, S.A.M Crown’s, is the most touching story in the book, and the most useful to the central character, Hriday, for it is from Crown that he learnt the ‘nuts and bolts of the publishing business’. Crown’s own story, though, is laden with a room full of books, and loneliness. He ‘would get bold-italic in my happiness’ and so he lost his family ‘because of my sentimentality’.

These two being my best men from the book!

By God Siddharth has made them all talk about Hriday Thakur, ‘the literature junkie, aspiring writer, inveterate lover of women and rain’. Which is to guess, his own reflection in the mirror! Makes me wonder. Is Hriday a photocopy of Siddharth himself, albeit intentionally the quality you get for 25p per side at Patel Chest, DU, where the difference between an ‘r’ and a ‘t’ is entirely left to imagination and smudged carbon? Meaning, are Hriday and Siddharth two different people by the thinnest hair-line fracture barely visible because it’s not there at all? They share a ‘storyteller’s intrinsic hunger for new material’, I have a feeling they both like to ‘sit and stare’ (how else do you breathe life into characters thus), stay unsentimental like a detached observer of life around and most importantly, share pretty much the same published-unpublished writing history. Too many coincidences!

That all the nuggets of “autobiographies” link with each other, often in unexpected ways, makes the reader wonder if indeed these are people who shaped our author’s life. Real people, maybe tweaked a bit, maybe not at all. Like a blend of fact and fiction and Harish Trivedi! What if Siddharth has decided to take cover inside the well-dressed Hriday’s persona in order to enter the characters’ heads to make them speak about themselves, and always about Hriday, and thus in turn about himself?
Gosh! That is complicated. And vain. And I think it’s true too!

A novelist is many things)

What it is to be an aspiring writer is rendered beautifully in the book. What moving beyond writing ‘Manohar Kahaniyan’ takes, and doesn’t take. How love and money and passion mix like gin and tonic because ‘to keep writing I needed Charulata and to keep Charulata I had to keep writing’. How, often, ‘a line a week’ is progress and a week’s worth of words on paper celebratory. The aspiration to be on Page 3, but for now spreading it on a bench and sitting on it. Not knowing the ‘English equivalent of jootha’ but giving it some thought. And despite everything, pronouncing ‘Still a virgin, sir. Entirely unpublished’ without a drop of inky tears.

There’s something about writing in each of the stories in the book, and a little bit of a writer in each character that they make you listen to.

As much as a Bihari (located on any sun or moon lit terrace) would want to believe, it is not Patna or its style that forms a common thread between the narrations. Siddharth Chowdhury’s stories are strung together along the theme of relationships – intimate and sensuous and sometimes hard to define. There’s a man craving ‘something permanent’ when he proposes marriage to a woman, after moving into a servant’s quarters just to be close to her. He’s still looking for a steady job, by the way. There’s a dancing girl who is ready to do anything for another dancing girl, at the risk of her own freedom in a foreign country. An ex-flame is reading from her book to the students of a college ‘All the while reading ‘Omkar’ I hoped that he noticed that my hair was long again, the way it was when we first met and used to take those long bus rides on Route 901’. A marriage sees the man confessing how ‘I loved being married. I love its everyday voluptuousness and security’ and his wife wondering a few pages later ‘Is it possible that he has still not got over Charulata Roy?’

Some relationships affirm the ‘profound, round the clock love’ while others occupy the by-lanes of nostalgia, faded but not empty of fondness. A handful can be given no name. Only the Scottish proofreader dies a lonely death, but even then ‘six people besides the priest of St James’ Church were present by his graveside’, and one of them was sitting by his death bed the previous night. There is something at once impermanent as there is permanence in the myriad relationships the characters in the book share, including the relationship an aspiring writer forges with writing itself.

The ‘linguist Laloo’ kind of Bihari does not occupy prime position in the book but some references should make one happy. Say how Jishnu da waxes eloquent – ‘Biharis can manage anything. We have infinite patience and our skin is made of stainless steel…we are the most philosophical of Indians …We make for good true friends … a Bihari friend will manage anything for you’. (This was many refills down in Volga, but that’s not relevant here, right?)

Of course, Siddharth Chowdhury ‘suffers from delusions of grandeur’ enough to know his class and himself as a class apart from Biharis as we know them; in his head-boy coat, talk of Marx and gin-soaked brunches. Call it the ‘enduring vanity of the alpha male’ borrowed from his character or his ‘special power’, Siddharth has managed to both keep himself a part of all the drama yet step aside to view it and narrate it as a distant observer collecting tales. Distant, though not indifferent, and always dry-eyed. In making a greatly personal book, which I think this book is, impersonal lies his art.

If you are looking for the scent of Patna within the covers here, it’s merely a whiff. The perfume that is stronger is of a city that so many of us from our generation come to occupy, and own like a mistress if not make a wife, Delhi. And it lingers in the air much after you button up the jacket.

A different mix of stories and character sketches.

'The Patna Manual of Style' is published by Aleph Book Company, 2015.

[This review was commissioned by the publisher. Views are my own.]
Posted by Sakshi at 04:24