Book Review – The Other End of the Corridor by Sujata Rajpal 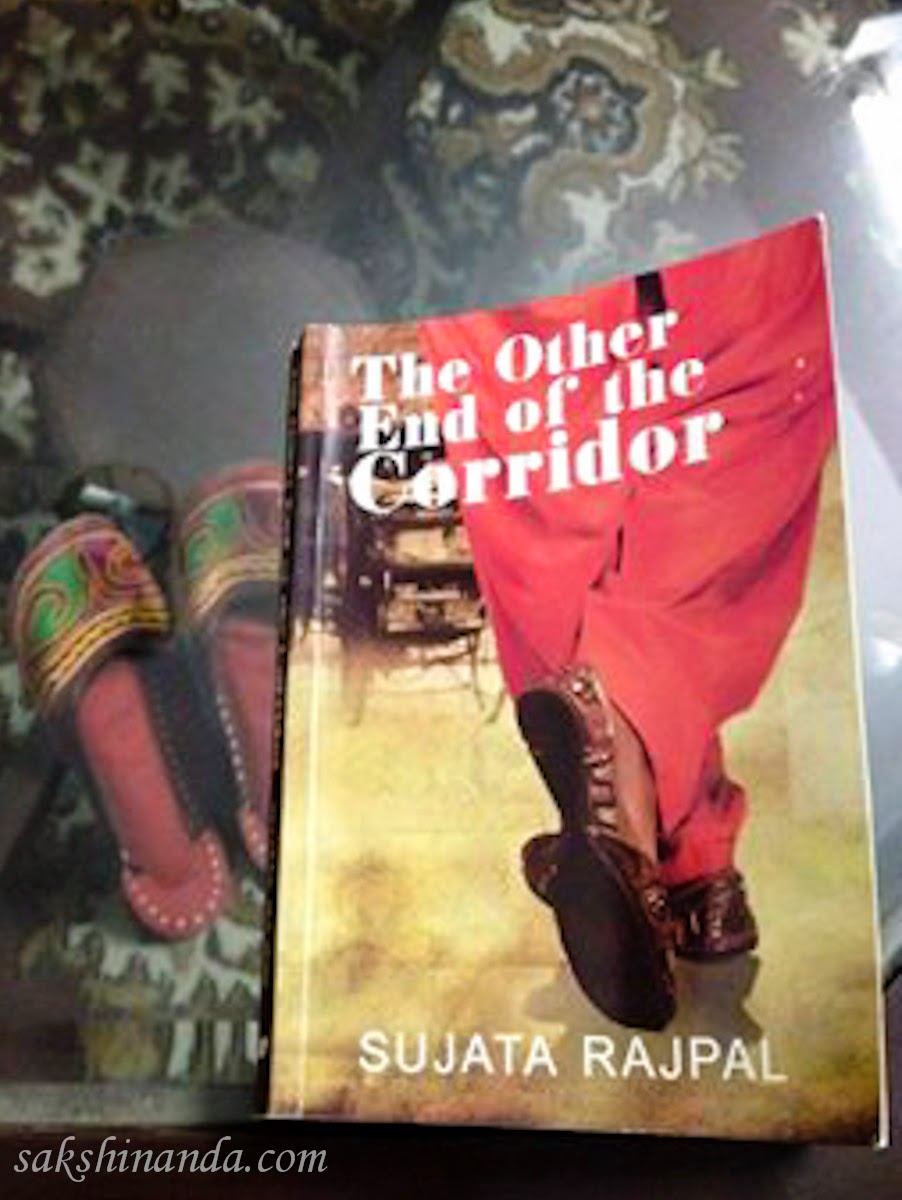 Sujata Rajpal’s ‘The Other End of the Corridor’, like some other contemporary works about women in society, is poignant for its portrayal of the central character’s evolution and rife with commentary on abusive marriages, repressive relationships and regressive social norms. Reading Sujata’s book thus became an exercise in seeing its distinctness from the other books in the genre.

Leela ‘felt like a piece of furniture in the market’ because ‘potential buyers’ were being sought for this 19-year-old to get married to. ‘I was being sold’, says she, and on page 10 itself we realize how Leela views things through a crystal-clear lens. With no love lost for her parents, and especially none for her father, ‘the self-proclaimed emperor of the house’, Leela is married off to a suicidal fraud. None, neither her in-laws nor her own parents, think stopping the cigarette burns and daily beatings make sense. Because, much like what so many still believe, where is a married woman to go if she leaves her husband? Leela realizes soon enough that ‘real life … didn’t have a hint of reel world’, While life continues with ‘the same bruises, same promises, same him, same me’, Sujata shows us how Leela is indeed not the same, gradually changing into the confident alter-ego she day-dreams about, and finally coming into her own.

There is nothing particularly spectacular about the plot or most of the characters of ‘The Other Side of the Corridor’. Sujata has leaned against stereotypes of people almost to a fault. The mother-in-law is a chip of the beaten-to-death block (despite the hard-to-fathom surprise in the end!) and the other characters too seem to be created from set moulds which we have witnessed on myriad media. As the book proceeds from one chapter to the next, the reader is almost prepared for everything to go wrong with Leela’s life, till it does. While we cannot deny each segment its tinge of reality, or the characters their bold shades of grey, the story in itself is not the selling point of this book.

Having said that, three distinct aspects made ‘The Other Side of the Corridor’ a worthwhile read in the end.

Showing (in detail) and not just telling

Sujata, through Leela’s eyes, has managed to convey situations and emotions without putting them in so many words. As Leela looks around her middle class life to tell us her story, intricate ambient details merge with her thoughts to create scenes of immense poignancy which echo in the reader's mind. Which show what is on, without telling what is. I don’t know how to exemplify this, but let me try.

The night Leela’s ‘virginity walked out of the door’, she turns towards her husband the next second to see, ‘his back turned to me, brown checked blanket pulled over him. Only a part of his head was visible.’ The next morning, ‘Vishal’s side of the bed had been straightened…the blanket folded neatly’. There is a hint that all is not well, but we’re still not sure. Neither is Leela, as she ‘hurried to the bathroom and secured the latch on the top as well as the bottom.’ In securing two latches, Leela’s actions spoke out loud.

Leela is created through a string of such images. Her unspoken misgivings on picturing her rich friend ‘Harleen sitting in my middle class apartment’ or how her ‘eyes were glued to the right side of the menu’ without saying why make readers feel they know this woman since a long time. She never needs to tell us what she is thinking yet she can make us hear her simple, conscious voice. It is an access to this central character’s mind that is as intimate as embracing a friend.

Getting to know Leela, and understanding her, becomes a personal process. So personal, that the cardboard cutouts of some other characters stop mattering. Leela is who we are watching and listening to, just like Sujata intended.

‘How long can one go on folding clothes?’ – Leela’s walk

From the first page itself we see how Leela is simple but no simpleton to not see through the charade of the marriage market. Even though her thoughts are nothing but simmering embers at this point, she has a quiet opinion. She knows that ‘my parents had allowed a complete stranger to sleep with their daughter’. She tows the claustrophobic line like a mute cow, but she is anything but that when she “talks” to us; showing us the seeds of rebellion within. What breaks the cliché of the setting is the ‘distinctive voice’ she makes herself heard in, albeit to only us. For now, and for the most part of the book.

What we also sense is her ambition. Her aspiration for upward mobility in the social rungs of life, the ‘solace in the fact that my marriage had helped me come up to a middle class status’ and ‘big dreams of becoming a Radio Jockey’. Following her parents’ orders stemmed from this very desire to marry better, move into a bigger city and do something worthwhile. To find an answer to ‘What’s my identity’ by first trying to build one in an abusive relationship but then helplessly creating a couple. One free in the online world and another in the company of elite and successful women, feeling carefree listening to their ‘dirty talk’. By smelling their perfumes and absorbing their richness, though painfully aware of how apart their worlds were, Leela finds enough distractions to gradually start enjoying the ‘taste of adventure … glass in my hand … made me feel important’. While nothing is changing within the walls of her marital house, much is inside of her. What she finally finds is courage to hit Vishal back. Because by now she feels desired, elsewhere. By now she says ‘I love you’, to someone else, ‘even if it was a wrong number, the number was mine’.

Throughout we see Leela shuttling between an oppressed adult and a girl with eyes as wide as a teenager who ‘loved the smell of gold’. This makes her flesh-and-blood. Makes her embarrassingly honest. Tells us what pushing young girls into marriage does to their psychology. Leela owns you in her struggles.

But, why does she suffer Vishal? This question nagged me throughout the book.

Is it because ‘an unemployed man in Delhi was better than living in the unloved, glum atmosphere of my parents’ house’ that she drags herself, bruises and all, in a loveless life? Her self-talk is powerful but it barely converts into a permanent stand. She muses – ‘I didn’t know why I always surrendered’. We are glad she is asking that. And nod when she accepts ‘it was ironic that after all the promises I made to myself, like my mother, I too had a mute existence in my marital home’. We agree. We are angry for her and somewhat with her too.

Why doesn’t she change her circumstances, for so long? Why does her prayer for freedom and ‘I longed for Vishal’s death’ come so late in the day, and feeling so sudden? Is this a problem with the plot? Or is this what is called “and then it all snapped, forever”?

‘I questioned myself. I couldn’t find an answer.’ - that important question...

There are moments of epiphany that make Leela realize how ‘I had lived in a dream world all my life, always blaming the circumstances for my own weaknesses’. So, while she gradually walks the corridor of freedom – from unquestioning dependence and social norms towards what she wants to be, she opens herself to questioning by the reader, by questioning herself thus. She invites us to think when she says ‘call it a compromise, adjustment, or selfishness; I agreed to return to my marital home’ even after Vishal is ready to divorce her for hitting him once.

You think, sitting in much loved homes - Why do so many women continue battered and worn, used and abused, till circumstances step in to deliver them? Till the glass is brim full? The book doesn’t answer that. Leela knows ‘it was always something I did, or failed to do, something I said or didn’t say’ that is held responsible for how people treat her, yet she also realises ‘It’s a very cruel world. Can a woman live alone?’

Sujata does well to give expression to this dilemma and voice to the particularity of it all. As for answers, some are as subjective as the questions are real.

Leela’s story contains threads that you too would have heard of, in real life. Leela’s journey towards freedom wrought with equal amounts of conviction and misgiving might sound familiar. You would understand it. The walk in the ‘The Other End of the Corridor’ is a painfully slow one for Leela, but in the end she finds what she was looking for – her distinct voice, spoken aloud and not just to us.

Sujata has dedicated this book to all ‘those Leelas, they are suffering, they are suffocating, they are shrieking in infinite silence, waiting for someone to come and free them from the invisible shackles.’ This one being the book about Sujata’s Leela.

And like I began, there are many such books being written. Each such endeavor to give them space on the part of the writers is special because each carries a unique perspective. Every such book is a voice in itself and a part of a larger chorus. You can’t help but wonder - If so many women have such stories inside them, waiting to be written and read, what does that say about our society? Something to think about.

A sensitive and thought-provoking read.

'The Other End of the Corridor' by Sujata Rajpal is published by Mahaveer Publishers, 2015

[This review was commissioned by the author. Views are my own.]