C for Chuckle in D for ‘Dating, Diapers and Denial’ by Rachna Singh 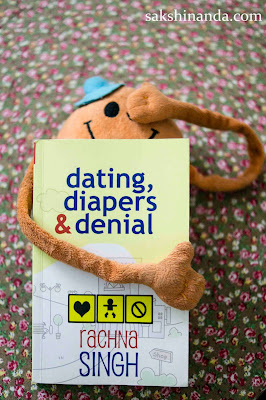 In a big, bad globe spinning around the mundane, both the home and the world often feel like the weight which shrugged Atlas, and not just on Mondays. (Sigh) Then comes along a book like a cylinder of fresh laughing gas. Rachna Singh’s ‘Dating, Diapers and Denial’ is that. It left me giggling like a 4-year-old (even though I am 16 now!)

The book is a mock-self-help, with 15 lessons which Rachna learnt or which she wants us to give serious thought to on a good-humored day. It is about men, women and children, but mostly about them together in one tea cup, stirred while juggling their roles and messing Rachna’s seldom-combed hair.

Her imagination is wild, but this is clearly her real life and so candidly shown you would wonder if your family would cook you if you threw open your house’s back door for a ‘comical view of life from a woman’s perspective’. She has done exactly that, in an organized and fair manner. Organised because the chapters (Lessons) follow a neat chronology of homely phases of evolution – dating to diapers to denial (about age, you know). And fair, because she’s not lampooning just men but boys all ages!

On men and marriage

For some of us marriage happens. As suddenly there are men growing out of our couches. The husband variety is a particularly interesting species. Lesson 1 itself tells you that ‘You will learn that real men really forget’, but when women dig mushy memories they ‘insist that the recall and recall alone is evidence of true love’. Why shouldn’t they? Men, however, with an ‘inner mind … operated via a TV remote’ never meet our memorable expectations!

All roles that men have to play are important. But none as much as the one ‘to record your performance on the video camera’ during the society celebrations for Independence Day or selection for Teej Queen. Successfully? Not in this book, no.

But men are human too, even though one may believe they’re half-man half-remotes. They age just like any normal human and go into denial. What do they do, apart from getting ‘multiple gym memberships’? They buy, like Rachna says, motorbikes, which:

‘they park in the garage, or … under a tree. They clean these bikes, talk to them, and pretend to repair them with expensive tool-kits. Of course, they don’t ride the bikes because a) the wife has made it clear that the roads are not safe. b) the doctor has told him that his back cannot be subjected to this extreme stress. The spare parts are expensive too, so these men try to sell their kidneys for them. But by now, the only place accepting their kidney is the National Institute of Fossil Sciences.’

When age sets in for a woman (obviously much later than men!) and she has found her voice, the man at home mutates into 'a casual observer (who) has just woken up and turned up the volume of the cricket match and is, at best, vaguely aware, that there is some blurred silhouette of a mid-to-large-sized female in the corner of his eye. It seems to be saying something.’ No surprise then that our maids and support staff not just help us but ‘are used as role-models during spousal fights’.

We can't blame women. Do you know what we go through to bear kids?!

On childbirth and parenting

And here’s an excerpt:

‘Childbirth was not easy! In fact, our first-born, Aisha, was born in extremely alien conditions: at a hospital in Kawasaki in Japan. The only English term those guys knew back then was ‘curry and chutney’ used while ordering ‘curry and chutney’ at any Indian or Pakistani restaurant. And, the only Japanese word we knew was ‘Sayonara’ taught to us by Asha Parekh. Combining the two, one could not do much except have dinner and part: both activities not quite directly relevant to childbirth.

The Japanese government was very kind to us and provided us with the services of an interpreter. We were grateful till we read the fine print: we had to pay her by the hour. The thought of it gave both of us severe uterine contractions. In both cases, it turned out to be a false alarm, since I never went into labour, and Alok discovered he didn’t have a uterus.

Since I did not go into labour, and it was seven days over the due date, they finally decided to operate. It was a unique c-section operation conducted with the help of placards to communicate:
‘NOW IT IS PRICK’

‘NOW YOU IS OUCH’
I must have laughed a lot through the procedure, perhaps giving them an inaccurate cross-cultural lesson: ‘Indians laugh a lot during childbirth’. Maybe, it’s part of the curriculum of the Tokyo University for International Relations now.'

Rachna has a wide array of experiences to share as a parent, and lessons learnt too. Say, how new age parents cannot rely on threats of ‘Budhdha baba’ anymore. Kids know there is no old man out to get them, ‘and the old man you point to is Ram Jethmalani, in conversation with Arnab Goswami. And he is not out to get them. At this age, there are few things he ‘gets’.

So, with kids you need to be ready. With new-age treats, with threats, with non-organic vacations and with answers especially for the ‘acid test’ questions, which feature God. Rachna helps.

Through anecdotes from her own childhood to what our kids consider their childhood, Rachna manages to paint two generations in two different contexts (with Bobby, the male doll in moulded plastic band-master’s dress … ‘who had socks that just grew on him of the same material as his legs were’ making a guest appearance and marrying many female dolls!)

On women, and everything about them!

A lot of feminine ground is covered in ‘Dating, Diapers and Denial’. That is, the various issues which beset women at myriad stages of their lives. From keenly observing ‘increased political activity in a group of girls’ during playtime to later in uncannily similar kitty parties, Rachna gives us a peep into social behavior that we see when more than one women are put together in a tea cup, or in a gym. She even shows us the hilarity of being a work-from-home mother.

She loves meeting old people, ‘but if I peel the layers, it’s really about being addressed as “you youngsters” by them’. She stands at that ‘awkward age. Older cousins are becoming grandparents; younger ones are still getting married.’

‘I feel it’s time to start a movement for equal, non-discriminatory facilities at discos. I ask, why are there no wheel chairs at Tito’s? Why can’t they have ‘Geriatric Nites’ as well?’

India as we know it emerges; as a land where ‘according to the Book of Indian Politics, if you can walk around and breathe, unassisted, you are young.’ Where a doctor’s entourage 'comprises doctors, nurses and some MNS volunteers, who are on a project to uphold Indian values in wards.’ And where prime time can be rather confusing, thus:

‘During the news telecast the TV screen is sliced into several disconnected sections … For instance, Mayawati behenji wagging a finger and making a stern point is not to be linked to the scrolling line below: ‘Breaking News: Salman Khan decides to marry his dream woman’. And certainly not to the animated ad ‘I-pill set them free.’

Lesson 8 insists that ‘You will want to come back to India’, especially if you are in Japan where there are too many words to denote ‘apology’ from ‘I am sorry’ to ‘I-am-appalled-at-having-offended-you-can-I-bear-your-child-as-an-apology’? NRIs don’t escape her wit. ‘Irrespective of which country we were in, our lives seemed to be under a cloud. On closer inspection, it was found that the cloud was a mass of soap bubbles, under which we washed dishes, day after miserable day!’

Now if only she had elucidated on the gifts NRIs get for their “poorer cousins” in the third world, I would have stood up on my chair and applauded.

So, what did I learn?

That for my forgetful husband I will do as Rachna advises; create events: ‘Remember you promised on our anniversary I could buy that bracelet if I stuck to my diet plan? The combined effect of ‘remember’ and ‘anniversary’ will get you more than the bracelet.’

That out of the ‘two options, one is to find a good parent role model whom you can emulate or a bad parent contrast against whom you can look very good’, I pick the latter.

That I swear to free women-folk from oppression. ‘And what better way to do it than to mete out the same treatment to the men, giving them a taste of their own medicine?’

And, that if writing humour is tough work, reviewing it is even more. This here has lengthened like a rubber-band and I haven't told you half of it yet …

‘Dating, Diapers and Denial’ is Rachna’s “autobiography” but you realize it is a one-size-fits-all stand-up comedy act about our everyday lives. We women will relate to the anecdotes and enjoy, and men are requested to have a good sense of humour. The humour is warm not dry, and with witticisms delivered with a straight-face and right when you are not expecting them.

This was a fun and funny read.

'Dating, Diapers and Denial' by Rachna Singh is published by Alchemy Publishers, 2011.