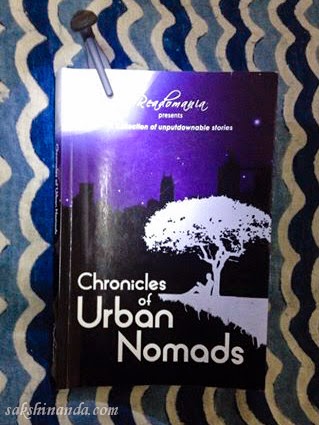 Much like any collection of short stories by different authors Readomania’s ‘Chronicles of Urban Nomads’ is a potpourri … no wait, let’s use an image in keeping with the season. ‘Chronicles…’ is like that packet of assorted Xmas tree decorations with 19 items inside. Some are exquisitely novel, like delicate musical instruments with bob-tails and golden threads. An equal number of pieces somewhat usual, like candy sticks, yet nice enough to hold your attention. A few, however and inescapably, don’t add much cheer to your season (say, the Styrofoam balls didn’t last the journey home!) You wished the shopkeeper was more discerning, or maybe he was giving every item a fair chance, in keeping with the spirit of generosity? That’s a lot of Xmas to begin with, but I hope you see what I mean to say about the 19 stories in Readomania’s latest anthology.

The editor’s laudatory note calls the collection of stories a ‘psychedelic fabric that wraps around you’, marries classic with contemporary, and which carries an impact much like ‘a punch in the solar plexus’. The note also introduces us to the two segments into which the stories are divided – Imagine, and Musings. While the former rests on Personification the latter contains more conventionally written stories. Now, even if we ignore the verb-noun conflict in naming the sections and think ‘Imagination’ and ‘Musings’ would be more like it, we cannot the fact that both sections are well-connected by a thread we call human life. Either the personified objects are showing us their human sides or we have life-size characters ranging from parents to spouses, lovers to friends and even children. Thus, what connect all the stories are human emotions and experiences, lending credence to the ‘Chronicles’ in the title of the book.

Four stories stood apart from the rest, primarily because I couldn’t tease them into pieces I would have written any other way. Also because, and more importantly so, all four seemed to have elements out of the five of short story writing – character, plot, setting, conflict and theme – used well.

The sari in ‘Confessions of a Benarasi Sari’ by Ayan Pal was ‘woven to wow’. It is a most well-rounded personification. Ayan has seamlessly reflected on to its purple sheen feelings of misgiving and vanity, desire and pride. The sari becomes inseparable from the character of the woman (or any woman) who is about to tie the knot. Eventually, it becomes symbolic of the groom’s mother’s mind too, thus wrapping within its folds a universal experience of womanhood. The story is grounded in a Bengali setting rife with visual details without interfering with the emotional tug of the story. As an aside, I wonder if my wedding Benarasi will also confess that ‘every single glance of satisfaction caused my strands of desire to slowly weave themselves into a pair of wings and then suddenly, I was flying.’

‘The Blue Slippers’ by Kirthi Jayakumar is one of the most beautifully written stories in the collection. The streams of consciousness of the object personified (not telling you what) are expressed much like thoughts are formed – sans consideration for proper punctuations. This style of writing can be very impactful, especially when not overdone. The story has two parallel plot-lines which converge in the last bit to leave you contemplative, even as it beautifully renders the sad truth of life that ‘one had to be worse off for the other to be better off’. Much like what the personified object in this very short short-story thinks of itself, ‘The Blue Slippers’ is ‘not your average over-emotional case’. Kirthi does not force emotion out of us readers. The story is told standing apart from the characters and action, a technique very difficult to master. It is showing us a picture but is letting us look for reactions on our own. This is good writing.

Rahul Biswas’s ‘Hopes and Promises’ is written around the ‘thick, sticky net of indifference’ that envelops many marriages of many years. With an eye for minute details without making it wordy, Rahul creates a modern, urban milieu of two couples who are living out their marriages feeling ‘brotherly’ concern towards their spouses, but not much else. Apart from the mature theme, the author very elegantly keeps himself from taking moral sides in this conflict-ridden story, even as he gives due “voice” to each character. An inconclusive end leaves you asking for closed threads yet keeps you fully aware that some stories begun just cannot have an end. What remains is a door hinging around both hope and promise.

‘Finding Mia’ by Roopa Raveendran-Menon will echo in my head and give me goose-bumps for a long, long time to come. It begins on a spine-chilling note, proceeds as mysteriously, nonchalantly disturbs and makes you start when ‘I touch the bark. I hear a shriek. There is blood on my hands. I faint.’ The characters are named Mia, Mina, Myna/Mynah adding to the eerie effect. The whole story comprises short segments which move sans chronology but without obfuscating the plot. In the end, what is most spooky about Mina’s tale is its reality, after ‘the spell breaks’, of discharge from the mental hospital but with stolen pills in the hands.

Coming in a close second …

There are some stories that I would like to mention for what they have, and the little extra that they could have had.

‘A Little Nugget of Fear’ by Deepti Menon personifies the most interesting ‘thing’. It is a story of a woman who gets married and then bears a child, written with this specific context in mind. Perhaps it is the only personification which has a prevalent reality to portray, in a story with a similar aim. The ‘thing’ is well-enshrined in the woman ever since her birth, forever being provoked and finally leading to the penultimate scene - one of a vicarious murderer in a fatalistic twist to the tale and which I absolutely loved. However, what diluted the disturbing impact of the story was its stereotypical characterization. (Also, ‘little’ in the title was unnecessary.)

‘EFIL’ by Bhaswar Mukherjee continued as my favourite story, except when it ended the way it did. It is a story of ‘an apology of a man’ WMD living in a tragi-comic domestic setting and trying his best to draw humour out of it. Until he realizes he wants to look for more meaning than domestic chores endow him with. Using his special gift which brings alive inanimate objects around him, WMD seeks to climb mountains to win over the one ‘lady’ he wants to mount, and who is not his wife. But all the effortless humour and modernist setting blew away with a sand storm the moment Bhaswar brought in a conspiracy theory angle. I wish the story a different end next time.

‘The Wait’ by Akshay Abbhi impresses with the maturity of its premise and the depiction of the very human conflicts that poverty and old age on the brink of death bring with them. It touched me, this very short story, but what saddened me was the absence of a visual appeal and that the personification did not speak its own language. ‘The Last Letter’ by Dipankar Mukherjee is another such story, lacking in the visual but poignant with emotions of a father making his last journey. It’s a grown-up story which makes you feel but disappoints with the way it reveals the only other character, apart from the father, a tad too prematurely.

I would also like to mention Jagadish Nadanalli’s ‘Bachelor and Baby’. An unmarried man treated suspiciously by the neighbours meets an endearingly created 'baby’. The story subtly makes a comment on the discriminatory attitudes of society and how appearances can be deceptive. The simplicity of narration makes the story impactful. Just that, yet again, it ends on a bed of cliché.

To be fair, I did sit down to list to myself as to why a handful of stories did not find separate mention. I compiled this, almost in the order of appearance – unripe language, simplistic characters, implausible character motivations, strange generalisations, clichéd dialogues, drunk tenses, moral science lessons, plain personifications, old-fashioned/predictable endings, half-baked emotions, hurried narrations and that’s enough use of adjectives by me for this year. Basically, crimes which tend to rear their heads in any heterogeneous group of stories. But did I excuse the punctuation errors scattered everywhere? Not even the jolly season can make me!

‘Chronicles of Urban Nomads’, much like any anthology showcasing first time writers, will generate mixed emotions. But much like any such anthology, I wish ‘Chronicles…’ is read by many. Quality platforms for giving new writers a chance to be read are few, and their importance can never be stressed enough. I do wish that the book was not divided into two clear sections. When we know story 1-9 are personifications, reading can reduce to attempts at guessing who what is talking, making the reader miss out on the other elements. Such shoe-boxing can lead to greater undue comparisons too. Of course, if you are smart and realize this soon enough, like me, you will interleave stories from the two sections.

You must read this book, my way or your way!

'Chronicles of Urban Nomads' is a Readomania publication, 2014

[This review was commissioned by the publisher. All views are my own.]