A few days back I shared this on social media; something that I saw on a street in New Delhi:

“So this man was peeing for 15 seconds behind a tree, after which he emerged looking relieved and wiping his hands with his yellow hanky. (I am assuming there was no tap there) He zipped up his jacket right to the top, rubbed both his cheeks as if warming up for something and then crossed the road to reach Bangladesh Embassy (minor detail, not important). He spoke to the gate guard and used his pen to make an entry in the register. He scribbled for a long time, and then the pen went back into the guard's upper pocket. Before walking inside, he shook hands with the guard, probably to thank him for the information he gave him. The gate guard was gleeful at being treated so well. Someone shook hands with him!

The same hands which were being wiped clean of something just a few minutes back. I wonder if the pen realised? The cheeks, maybe? The hanky, of course, must be dead already.

Moral of the story - Go sanskari. Say namaste instead! You just never know, no?”

If I knew toilet talk would get me popular, I would make an early morning ablution of it. My update about the ‘travelling hand’ had caught many fancies. A party of men and women gathered in the comments-section to LOL, drop a few ewws, sympathise with the hanky, call men anything from lucky to yucky for using roadsides thus and generally join in the dirty talk. Two goodly men even cared to share the status update, on their pee-free (I suppose) walls.

Now, while the image of a dirty ‘travelling hand’ is eww it is also very true that lack of time or awareness makes us find quick short-cuts to reach a semblance of cleanliness without a thought spared to those evil troublemakers called kitaanus. Their salivating mandibles wait eagerly for the slightest slip on our ends – putting rotis in a cloth which just wiped the casserole, spray-shining the appliances and then taking the rag to wipe the baby’s toys or even the extreme case of using a hankerchief to clean ‘relieved’ hands, then a sweaty forehead, snotty nose and later food off a toddler’s mouth too.

Filthy and futile, both.

That’s where Dettol Multi-Use Wipes should make their debut in your life. There is that dependability on a brand you grew up using (albeit in lesser nice-smelling formats) and that versatility of using it for various purposes, wherever and whenever. The best bit is, they not only protect skin from germs but help keep it germ-free too, without robbing it of its natural protection. As a mother to a Pisces child born with great love for liquids of all kinds, I have found these wipes handy and useful. By the way, they are available online too! 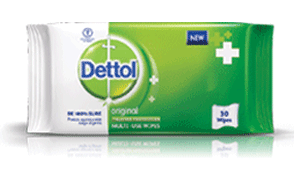 To end on a note that I began on ... I have kept an extra packet in my car’s glove box now. Not just for myself but also for the 15-seconds-men on the road. After all, a filthy handshake, no matter how golden, is also a totally futile one!

[This is a sponsored product review.]
Posted by Sakshi at 15:45