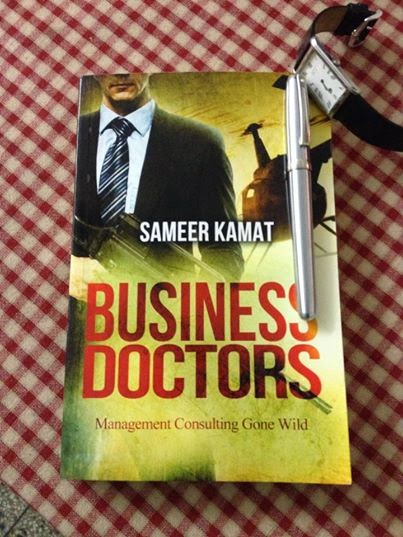 The cover of Sameer Kamat’s novel, ‘Business Doctors’ looks good. The perfect knot of tie below a handsome jawline. A helicopter in the background, and a mean machine held right behind the title of the book, written in the colour of blood. They say don’t judge a book by its cover. I agree. But if ever we were to talk of one which portrayed what lay inside to the t(ie), I will remember this one. Of course, I realized it only after I read the book. What did I find inside?

‘Business Doctors’ is the story of Ivy League educated management consultant, Michael Schneider, who gets hired by a mafia boss with an ‘affinity to violence’, Stephen Woody. Why? Woody’s extensive family business - spanning drugs, gambling and porn – seems to be breathing its last. Money’s not coming in and more than his employed henchmen’s capabilities are under question. This ‘underworld don’s show wife’, Angie, who is otherwise supposed to remain an hour-glass trophy, suggests he needs professional help. Just like a tooth ache needs a dentist, a jail suit a lawyer, problems in business need ‘business doctors … called management consultants’. Schneider takes on the challenge to re-launch the underworld organization into the highly-evolved world of crime, least knowing what awaits him at the end of this dangerous tunnel.

Taking the board room to the ‘Dungeon’

‘… where the thumb rule was to dress one degree higher … the communication usually subtle – the glint of light shining against gold cufflinks and nibs conveys the message’.

The premise on which the book is created is novel – an age-old system of unorganised business married to one of presentations and flow-charts, recruitment and induction, value-stream mapping and out-of-the-box thinking. Sameer has to have studied well (within the confines of his own cabin at work I’m guessing) both kinds to manage this smooth and interesting fusion – The Storming – Forming – Norming - Performing of it all.

The story is delivered well. It has surprises lurching in dark alleys and well-planned prison breaks, much like the action-packed chapter one, with ‘reflex taking over reason’. Goosebumpy thrill is not something I felt, but suspense I smelled. Sameer has used something which I loosely call “Scene Silencing” in some significant places – like building a thread to a point of high interest and then just suddenly leaving it dangling, making the wondering readers feel compelled to turn the pages. Later, the incomplete thread that was built with a bang gets tied up so matter-of-factly, you wonder if Sameer was trying to test if we were paying attention. I found that technique smartly used!

There is a lot of management jargon used but without making the book boring or difficult to comprehend, especially for readers like me who are still unsure of what MBA stands for. The language is conversational and at no point does it seem to slow the movement of the plot. In fact, for the most part of the book, it helps maintain a speed of reading matching the pace of the plot. No extra descriptions, no time wasted on the unimportant. Just sticking to the business at hand – guns and roses. By roses I mean humour strewn in surprising corners.

And as we hop from gambling in Vegas to a seedy locale for a peep (not show) into the world of pornography, Sameer dots the narration with enough witty ones to not make us cringe at the blood (however little) or not feel sleepy discussing ‘organisation restructuring’. We hear Woody presiding the Dungeon with his men, drumming his gold-laden fingers ‘impatiently on the table. The resulting tapping sound achieved the same effect as the usage of a minor scale in a musical piece – to build tension and an air of suspense … so effective … that it might have been worthwhile for Woody to consider music composition as an alternative career option, it the proportions of brain and braun were more balanced’. How management consultants looked groomed, intelligent and mildly aggressive but ‘the closest they came to being wired was their possession of iPhones’ and instantly became ‘role models for his non-existent offspring' when they used ‘De-li-ve-ra-ble’ before Joe, a conman. The same Joe whose ‘face automatically went into power-saver mode after a pre-defined period of inactivity.’ And Blizzard, the 90 year old lady hacker who says ‘just assume I was a young, nerdy kid who had a sex change – and excessive smoking caused me to age rapidly.’ And each character, no matter how minor, gets his share of wise ones to mouth.

Which brings me to the characterisation. Clearly, Sameer Kamat intended Michael Schneider to be the super-hero of this novel, ‘not worried about survival … but concerned about thriving’. A Don Quixote with his Sancho Panza, Martin, having all the answers and making a perfect team. But I did not fall in love with his charming intelligence. Neither was the portrayal of the female characters, bordering on typical, anything to write home about. I did fall in love with Sameer’s minor characters, mostly conmen and ‘hardened criminals’, each given a personality of his/her own, a language to match it, fears to do with their pasts and dreams for the future. Attributes, external or otherwise, making each name stand for a character who we can easily draw in our minds. Here too, sticking to the significant and keeping the unnecessary out helped!

What didn’t keep me ‘trigger happy’

Let me put it in points, for the author:

1. The text of the book has no paragraph breaks. The only break-points are when chapters end and begin. If this was a structural experiment to help keep the book racy, I am not sure if it was successful. At best, the charging story did not need it. It only showed through like a printer’s error spread all over the book, making the reading slightly tedious.

2. Often, Woody’s men handling his various businesses come across as too dumb (or is Schneider created as super-smart?) If they indeed were all tattoos and muscles and no brains, how did Woody’s business run even after his father’s death, no matter how unsuccessfully?

3. Martin, who was for the most part Schneider’s cerebral-compliment, suddenly vanishes, never to return. I quite enjoyed them as a team. Together. Did Sameer get too busy with Michael’s grandeur to have missed making Martin reappear, at all?

4. In the ‘glorified prison’ setting (I say no more or I spoil) the pace of the book slows down such that management jargon exceeds action to an extent of making this chapter unnecessarily slow. That too, at a point where the book was chugging along like a happy train on the tracks. Also, to see those conmen suddenly behaving like school-children took away from the machismo the book was hinging around.

I wait for a day when a book about the underworld will be based in India. Do we know so little about our own mafia or do we know more about the one working on foreign shores, thanks to Hollywood’s generous dose of films about their underworld? I don’t know! In the meantime, as Schneider says, ‘if you squint your eyes and check out the Hollywood sign, it reads Hell Good’, and that Hollywood has been in showing us their underworld through cinema, just like this book has been through the written word.

‘Business Doctors’ is an entertaining novel. Good plot-work in easy-to-read language, scenes of action well done, characters you can picturise and most importantly intelligent superimposition of management theories on the ways of the underworld. Interestingly, both worlds are painted in the same shade of grey, erasing the given lines of right and wrong, legal and criminal. Let the last word be my favourite quote from Sameer Kamat’s book, which Angie says to Schneider:

‘You think what we are doing is wrong. You think you’d be completely safe if you go back to your earlier world (of consulting in corner offices). Stop kidding yourself, Schneider. Look around you. Your role models keep falling by the wayside. Most of the big-name consultants, those that you used to admire as super-heroes when you would have been at business school, are in jail. After a point in time, for the ambitious ones, it doesn’t matter where you are. It comes down to money and power. Everyone is breaking rules ... at WFB we do pretty much the same thing. In our quest for money and power, we just break a few more rules. In the business world, there is no gray. Either you are black, or you are white-washed. With us, you get to choose the shade of grey that you like the most.’

Something tells me this here is Sameer Kamat speaking, standing in Angie's shoes, of course. For after all, he has his own real world job to keep. Doesn't he?