For all my bros: G-spot in(Scent)ives 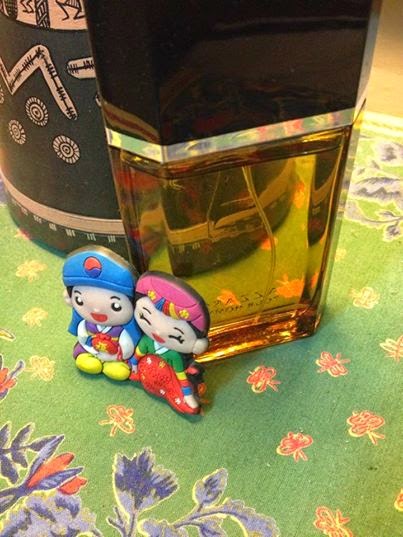 Myself Bunty. Only day before yesterday, I shaved off my wiry chest hair. I was told waxing it will be like 237 butter knives cutting up my chest. Together. So I did not have the guts to enter Hero Hira Lal Saloon for Menz. Shaving was not as Presto as those razor people make you believe so it took time, and my mother almost broke the bathroom door down banging on it. But not her fault. She wanted eggs from the market for a breakfast of anda bhurji. (She makes it very nicely. In ghee. Proper Punjabi. But let me get to the point.)

I needed a soft smooth chest to go with my image personality image which has developed manifold recently. More development my personality has seen than what developed countries saw in the past 3 years. Combined. So, I broke away all top buttons of all my shiny shirts for a clear view. (Mummy insists on sewing them back, but their popping is no coincidence). Today, I confidently say that I am a complete man of substances. Gelled hair with spikes, jeans with thunder marks on thighs and bullet tacks belt with pointed boots, one chain in neck one on wrist, a tattoo of skull and bones on biceps and finally, a shaved chest. Totally tip top macho with face shined up!

You see, I have become quite a heart throb wherever I go. When I walk past women, any age or stage, they go into orgasmic convulsions. They take deep breaths a couple of times, then start panting with heads slightly tilted backwards, eyes closed, a sudden gust of wind playing I spy with their hair and when the nasal ecstasy ends, they start seeking me with unmatched desperation. Like bees to honey, or flies to motichoor laddoos in my favourite Roshan Sweat Shop.

The first time it happened, I ran home scared, thinking those women were fainting on smelling my socks in the Metro and then coming to beat me up. But the next day itself, I got promoted to Mr. Dewd in my friend circle, with all kinds of mythical stories getting attached to any and all appendages of mine, however unrelated to the nose.  And however unused.

And then it struck me, like a pebble another pebble in a game of pithoo that this was thanks to a manipulative genius of mine. I made an invention. It’s my 20-something life’s most significant secret, so I’m going to tell you in hushed whispers.

I have invented a magical potion to spray all over my body. Yes.

One day, a few weeks back, in between enjoying mummy’s favourite soaps and dum aalo I saw all these adverts on TV showing how a single application of a deodorant leads to women falling head over heels, literally, for the guy who used them, even if the guy is still in his tadpole-using-calamine-on-pimples stage. Taking off saris, opening wet hair and all, jumping through windows or even down from high buildings. Only and only because of the guy’s deodorant which tickled their G-spot located deep up inside their noses.

Then, just after the night-long jagran mummy loves to organize was over, an idea descended into my head from the Godly clouds above. I thought to myself, if one deodorant has the power to make women go so crazy, what will happen if I mixed two up? Or even three? So what did I do? I bought Axe and Denver and Wild Horse from my left over Rakhi money. I collected them (mostly gas!) into a coffee shaker till the cans were empty, then did shake-shake to them to the tune of ‘Ketchup Song’. No lyrics needed. Then, I transferred the solution into an empty cologne bottle, an original Huge Bose from Palika. It shone like good whisky. I swear.

And the effects of using just a drop of it? Priceless! Way beyond what you can ever imagine even. And no, it’s not just about women any more.

As soon as Chaubey uncle handed me the eggs, I felt a sudden shiver in the packet which held them. I looked around Tilak Nagar, West Delhi, thinking it must be an earthquake. Or a tsunami. No one else seemed to have noticed. It was the eggs, belly dancing making hoopla rings all 6 of them. I couldn’t believe my eyes. I stood back and watched. They came near my chest. I moved back more. They neared. And then, all cracked open instantly on smelling my sexy smell. The chicks, it seems, just couldn’t control themselves. (Mummy was very angry that day, screaming something about 5 bucks an egg and inflation and breakfast and something something.) But me? I was super happy. I just realized how successful my experiment of mixing those deodorants had been. Finally, I drove cutie pie chicks crazy!

Another one comes to mind. It was my 21st happy birthday so I wore my favourite white button down with buttons down to meet some friends for mall-ing around. I reached before anyone else so excited I was. So I thought I will go to the men’s room, wet my gelled hair a bit. Make the spikes afresh. Maybe do susu also. And you know what happened? I was walking to the men’s loo, swinging my hips like a happy birthday boy’s when I hear a strange tap tap sound behind me. No, it wasn’t my heels. I looked back, with my usual style. The board of the ladies loo, ‘She’ with a tiny hourglass female figure, had come off the door as I passed it. It was following me, hungry to be in my arms. The aisle was empty and I rubbed my eyes, for this time I couldn’t believe my own magnetism which was attracting that brass ‘She’. And suddenly, it stuck to me. Somewhere around my belly button. Imagine! A board which only read ‘she’. Not even a real her. What have I invented, man!

Of course, tender aged minds could be reading this so I cannot tell you the effects on real women, of just a whiff of my experiment. But I will end with a message for all boys. Just remember, bros. You don’t need the face or the brains, you don’t need money or cars. Why, you could be toads (those irreversible variety) with an extra dose of warts for all it matters. As long as you smell like a whole pack of agarbatti and 2 types of Odonil combined. Women will simply kiss the ground your incensed armpits walked over. Such power lies in my tiny bottle. Make yours, today!

But shh. It’s a secret between us and the bottle I have named ‘Poten-she’.

By the way, I’m planning to drink it up next! Oh G, sounds exciting already, mummy swear!

[The prompt for today was - Evasive Action - What’s the most significant secret you’ve ever kept? Did the truth ever come out?]