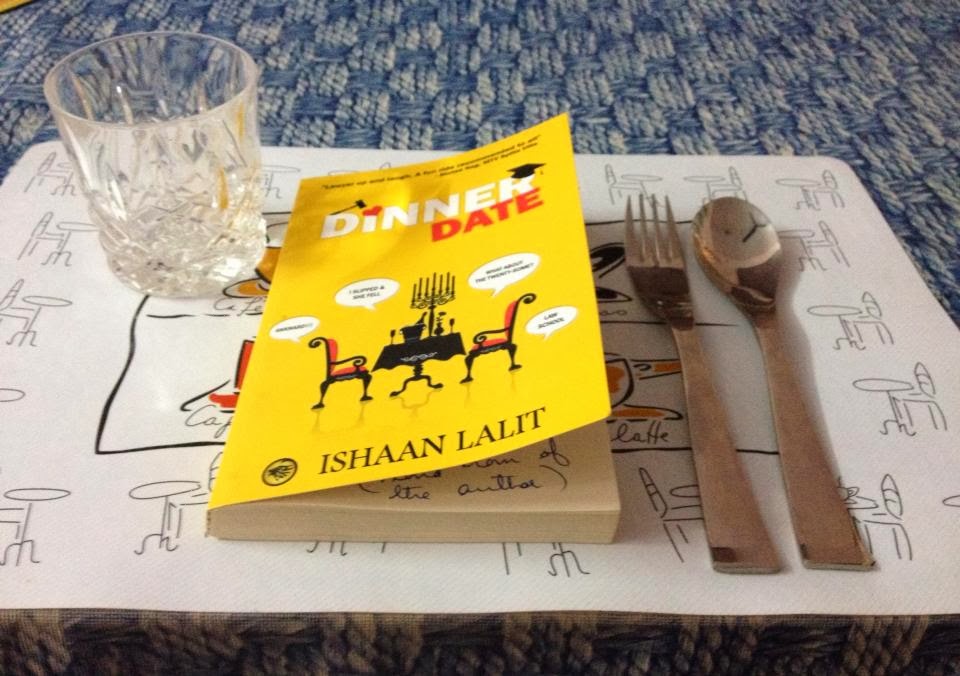 Ishaan Lalit begins the book with an informal apologia, to readers who await his next Science Fiction. For ‘Dinner Date’ is not that. This is a light-hearted laugh-fest which you enjoy while taking a break from bigger things or bigger books in life – exactly what the author had in mind for himself when he thought of writing this.

This book is a twisted type of bildungsroman. (Don’t blame me for using that word, after all, there are bits about it which remind you of Dickens’s ‘Great Expectations’. Alex the God-father and Sam coming into sudden riches is Pip’s story too, remember?) However, this is not to raise your expectations in any way. And in keeping with the quirkiness the author fills up the book with, lets use chapter names (in quotes) to tell you what I think.

‘The Devil’s Offer’ – Layering up Story-telling

Ishaan is trying to be smart, to outwit us from behind Sam. What does he do? He lawyers layers up the narration. Look at this equation:

Who is the story teller, really? Who are we to believe? I liked this brave structure. The tale within a tale of a tale. At most points in the book, I did not know who was speaking. All I knew was, I was always thrice removed from Ishaan’s mind. Or was I? Ishaan and Sam at the table do have the same aim, after all - ‘He wanted to get in her head, by one means or the other,’ not getting even, but ‘getting one up’. While Sam is trying his best with Malika, Ishaan makes us readers his dinner date. Interesting!

But then, the Sam from Sam’s story takes the attention away from the attempted technique. Such a detailed tale-telling and the author and the dinner table Sam are forgotten. The extensive detail of this narration-over-drinks reminds you of how flashbacks are done in movies – every prop in place. We just sit back and enjoy college Sam’s adventures in law school and then at his job. I wish the attempted technique ripened. Would have taken the book to an altogether different level. Maybe, more sudden appearances like ‘Oh! By the way my mother’s name is Nancy’ out of the blue, like an aside in a play. To remind the audience who the authority over story-telling is.

But then, it doesn’t matter! The book is not about evolutionary epiphanies which require literary genius, but a young, guffaw-worthy and enjoyable story. Enough literariness! Lets move on now.

I don’t like gay jokes, or trivializing sexuality. I squirmed when I encountered the first one, ‘Ram it into him’, despite knowing how commonplace these are in college life. I could not laugh at the various references to gayism in the initial part of the book. I do know it’s good to be open about taboos. In laughing them off as nothing serious, we are accepting them within the social folds, somewhat. But I did squirm. Why lie to you. And I had thought to myself - What if someone picks the joke off the book to use?

Thankfully, it changed for the better.

A senior Golf Club member says to Sam – ‘We don’t care if you are gay; you are a member of the club and a damn good lawyer’. I said a silent thank God, we’re growing up! The absolutely hilarious scene between Carl, Sam and Alex where ‘what does it matter? A condom is a condom’ and Sam’s dad’s ‘I was just worried if my son was getting the right kind of protection’ and not whether he was straight or not made me think – Yes! Perhaps this is how we need to beat stigmas attached to serious issues. This scene between father-son-uncle is very inspiring, even as you laugh your guts out when it unfolds.

Oh! And sex. I like how it makes its appearance in the book. I don’t mean nudity, but Aditi. No boy no man, but this girl, who is first introduced to us beating up two boys. And soon after, starting her bed-ventures with Sam. Always, just always, making the first move. Can I call it women empowerment of sorts? I will. Bold portrayal sans judgements and inviting none. So much so, I almost believed her ‘Of course, you pompous ass’ when Sam asks her if she’s dating him just for the sex. I am just fond of women characters making a choice. What else can I say? And even between friends, the word ‘sex’ comes without a ‘haw’ attached to it. Suddenly, just like that. As if they said paani-puri. And isn’t that wonderful?

‘Moments of Brilliance’ – The Ha Ha bits & the Hey-that’s-me-from-college!

Plenty of those in the book. Sam meets Alex and ‘all I could hear was the tune from Francis Ford Cappola’s Godfather’, followed by nicely done sessions. Sam dreaming, looking at Aditi – ‘she was beating up two first year students. I knew I had met my match’ and you can think of at least one such dreamer in your gang. Ram’s desperate plea – ‘I promise I will never look at a girl for the rest of my life. I will even turn homosexual and marry Rohit’s elder brother’, and you laugh.

And then, finding shades of your own college life and persona (‘maybe a late teenage’) within the pages. Soft targets and scapegoats, loyalty and friendship, outside class-room smartness, ‘icon’ making in college, earning respect by beating the system, being weird if your room is clean, job rivalries, daddy issues, sweet revenge and even those philosophical moments when you realize you are just a ‘tiny spec’. I had a lot of those in my college life. I must be a philosophical person!

Page 1 – Malika ‘smiled flirtatiously as she noticed Sam glance at her cleavage revealed through the plunging neckline’. Okay, that’s all good. But after the last chapter is done and a certain truth revealed, is this still all good? Or is it that the author used this for creating a first impression, and forgot about it? Makes no sense! Even her being in a hurry to leave this dinner date, or inquire about his job. Comes falling down when we reach the end, and their purpose of being together!

And then, the overall canvas of the book – limited in audience and scope. Not for readers looking for lyricism or beautiful language. Not even a hint of drama. The court scenes are witty but not very intelligent coming from lawyers like Sam. No one character rises above the others. Even Sam is dependent on the people around him to give him character. There is not much you carry after you finish the book, except a stomach full of laughter. The plot, characters and climax are all young, and will appeal to a set readership looking for a fun book to read. Not the book’s fault, really, but certainly a limitation.

‘Dinner Date’ is not ‘an empty suit’. It remains an easy-breezy read, with a simple plot delivered funnily. While the blurb says it is ‘the story of one evening’ rest assured, it is much longer than that. Lawyers and law students will find a slice of their life within, and maybe get nostalgic. No hidden agendas to ‘out-lawyer me’ or hidden meanings between the lines. Open the book with an open mind and time to kill, and you will not be disappointed.