China, the Hairy Dog and my Spectacles

China is always up to something naughty. No, I do not just mean playing hopscotch on our side of the LAC. I speak of more important matters! For instance, last Christmas I bought an air-filled Santa Claus for my son. When the cycle pump did the needful, we all realized how this Santa was indeed Chinese. Then, only this Holi, the Made in China water gun read ‘Holy Hey, I Love India’ on a multi-coloured flag, and I had to dump the incorrect version of the national symbol and language by removing the sticker as soon as was possible. Even the toys at the red lights are getting more expensive, and their lights and jingles hardly lasting more than a day now, when once they sang for a good number of Chinese New Year days. I feel cheated!

While I was still in my ‘why me?’ mode, I read how a zoo in China went ahead and dressed a Tibetan mastiff in furry brown coat, putting it in the African lion’s cage (which was on breeding leave). Even though the dog did a damn good bark-a-roar, the zoo visitors caught the act and returned home feeling very cheated. The dog lost his job and the zoo its credibility. In the mean time, I gained some comfort in numbers, of those who, like me, believe that China is indeed always up to something naughty.

And then, the spectacles happened. (I cannot entirely blame the ‘Made in China’ tags which I have been obsessively watching out for whenever shopping in malls or Monday markets. But I tell you, I am sure their minuteness had a role to play in giving me my first pair of spectacles.)

It dropped like a bomb, my eye doctor’s "Number toh ha’, par bahut zara sa. Just wear them while working on the computer, driving or watching TV." The solace of the latter half of his verdict fell on deaf ears, blind eyes and a mind busy with - There go my eyes. It will be downwards from now on. The glasses will get thicker, the eyes smaller. The death of the kajal pencil the reign of soft-cloth-to-wipe-them-thus in times of dal tadka or rainy days. Shades of eye shadow bye-bye and shadows under eyes hello. How will I wear my favourite polka dotted hair band along with my glasses, without crowding the back of my ears? No more use in fluttering of lashes to work my way into my husband’s wallet or that look-in-the-eye which tells my son, stop fussing in public! Hai, I am blind. By .5 and .7 but I am indeed blind, and will only go blinder and then blindest. There’s even a minus there, already.

"Let’s go get you some sexy ones," he chirped gleefully, as if sadistically happy for getting the No Number in My Eyes certificate, after this routine visit to the eye doctor spelled trouble only for me. Three stores and 30 brands later, I had not found a pair that suited my fancy. This was going to take some time, and convincing, he must have mused. So, with carpe diem stamped on his face the next day, he took me to the last-but-only optician central Dehra Dun had to offer. History repeated itself as glasses all shades and shapes went into the rejection box, even as the man behind the counter thought it was inspirational saying "spectacular spectacles" with his lovable pahari accent (and looks) to every piece he pushed towards me.

The 157th one was on my nose when my man said - "This is lovely. You look like what you should – A Writer." There, he had used the W-word, knowing fully-well how this will seal the deal in my head. And it sure did! Two days of unconvincing samples, convincing flattery and eventual emptying of wallet later, I had become the proud owner of my first-ever pair of spectacles. 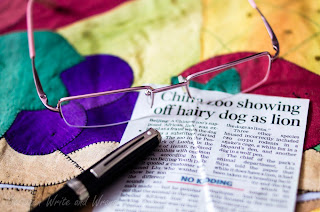 As they lie harmfully under-used but harmlessly sleeping over the latest-most important news from China, I wonder if my husband had tricked me into buying these by saying the W-word, just like the zoo-keeper in China tricked his people with his version of a lion. What if my readers see through me with my glasses, even as I don these "writerly" ones under all self-delusions of not just looking like a published author but writing like one too? And what if my bark writing is a give-away of how I too, like the dog in the lion’s cage, am just another wannabe with the right paraphernalia but barking in the wrong place and at the wrong time? A lion with a dog’s bark or a dog trying to roar? Worse of all, a dog thinking he is indeed a lion, and daring to write about it too. Phew!

So much for these ‘spectacular spectacles’ and for my husband’s 6/6 eye sight! They are going back in the box, where they belong. I am not that blind, and certainly not as yet.

Now, why can’t I see the darned box anywhere?