Book Review – Kamadeva; The God of Desire by Anuja Chandramouli 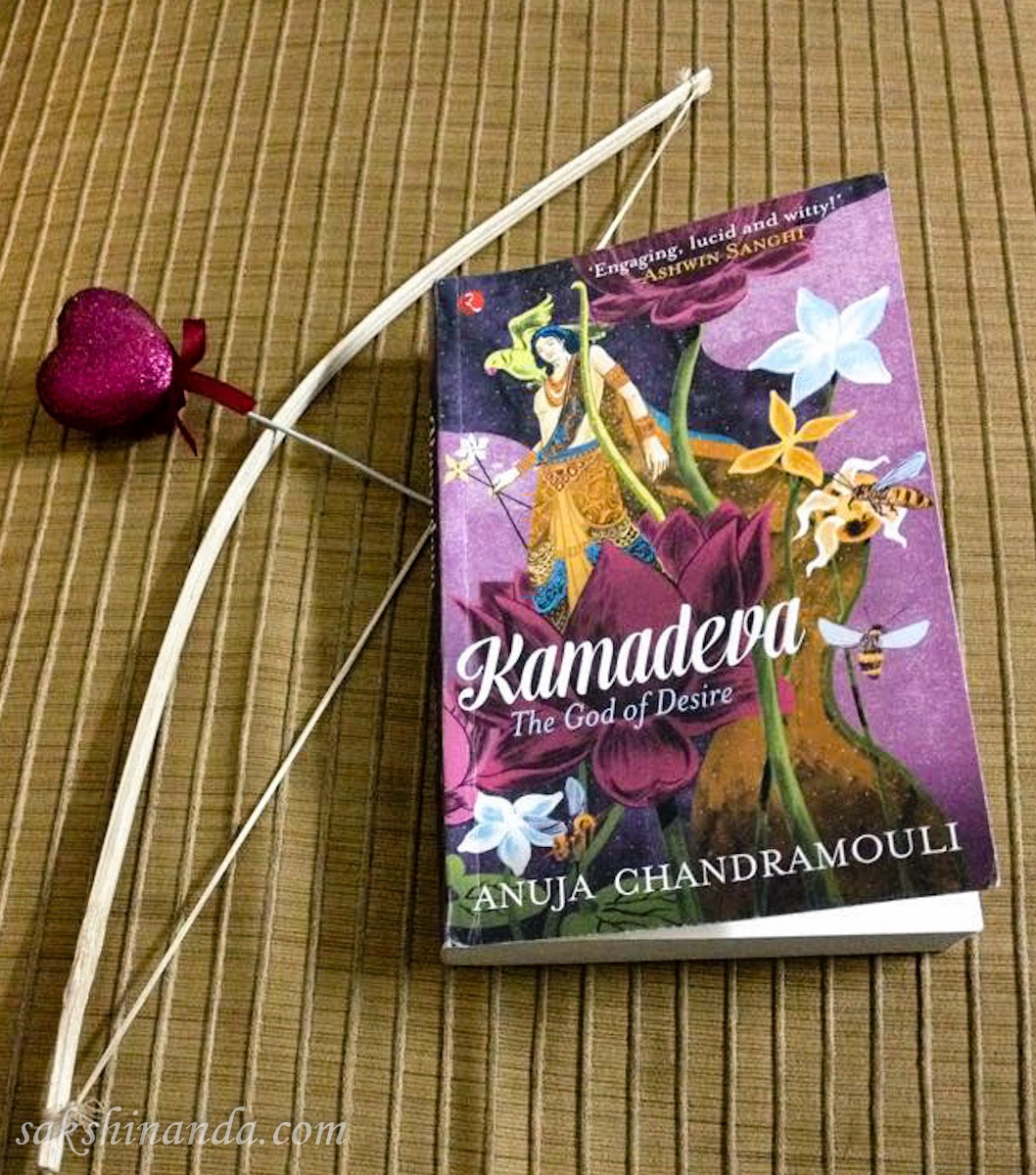 I was sitting and reading Anuja Chandramouli’s ‘Kamadeva; The God of Desire’ on a peaceful Mahashivratri day when I read Shiva being called ‘an uncouth, unwashed ascetic who reeked of corpses, blood and decay’. I laughed a scared laugh. If reading a quarter of this book had not confirmed my fear already, I knew for sure now that I’d be damned! Unless of course the Gods and Goddesses (though mostly Gods) enjoy the same sense of humour that Anuja has so delightfully put to use in telling us the story of the ‘boy with a toy bow’, Kamadeva. I hope they do, because in this book wit is just one of the many subversive weapons this writer employs to create a thoroughly entertaining and proudly sacrilegious story.

Chuck the blurb. ‘Kamadeva’ is not just about the juicy Kama’s journey from the magnificent Kingdom of Amravathi, through the preordained Third Eye curse and to the destiny where form or no form he is nuzzling Rati’s neck ever-so-gently. This book draws within its satirical folds the complete pantheon of Hindu gods and demi-gods (okay, the pop ones anyway!) and makes a running commentary on their polygamous lives full of lust love but times wrought with mindless wars and ill-tempered curses. The goddesses, in the meantime, take the sassy cake for speaking our minds, albeit in clothing, context and with husbands we wouldn’t exchange in this lifetime.

This book is, thus, an antithesis to mythology as we know it, or as Anuja lovingly calls it ‘pages upon pages of philosophical, pleonastic gobbledegook that will easily take entire lifetimes to comprehend’ which our grandmothers tried their best to make us swallow, whole. Remember? This slap-n-stick satire I’d like to call “mythology told from below”. Yes, yes, what subaltern means too.

How was this grand irreverent swim across the Milky Way successfully achieved?

‘Kamadeva’ is an exemplary book to see how language can be a tool for subversion. Anuja has used colloquial and slangy language on sacred clouds and meditative mounts. This intentional juxtaposition not just takes the sheen off the divine but replaces it with a wit’s-eye view of what is traditionally sacrosanct. She has not just humanized the Gods but has pulled them down to earth with such might that you would believe it is your libido talking, not just theirs. Brahma, Indra, Shiva, Vishnu right down to Arjuna haven’t escaped her arrows of satire. Her sweet wit is a kitten’s paw hiding the claws. Or not.

Brahma has been ‘injudiciously indulging his coarser passions’, with his only ‘saving grace’ being that he took his job of creation very seriously. Kama candidly admits to Vishnu that his father has ‘repressed sexuality and anger issues’, which, to be fair to Brahma, most of them seem to enjoy. The ‘duplicitous prick’, Indra is the ‘bloody bugger’ who has ‘shamelessly manipulated, cheated, lied, killed’. Krishna is always encouraged to ‘conjure up more evil plots that masquerade as universal truths or some such jazz’. And Arjun? ‘One of the most annoying men that ever lived with his incessant demands on Krishna’. Phew! ‘What say you?’

That was a time of such love that Kama and Rati ‘explored every conceivable and inconceivable kind of sexual union in addition to honing the skills of kissing, embracing and the oral arts.’ That was also a time of much stress, for Indra always said ‘We are in deep shit!’ and many a time ‘underwear in a bunch’ were the norm. There is so much conspiracy hatching that letting 'nature run its course’ is akin to ‘get down on my knees and pry open my butt cheeks to allow (enemies) easier access’, as Indra puts it. Women like Maya were doing ‘Godkind and mankind a big favour’ by not letting go of their perky breasts and ‘normal sized privates in order to push war-like sons Shambara so desired’. And there are prophesies which ‘reek of bullshit’ and ideas of beauty in a woman which meant ‘hypermammiferous or possessed of an exceptional rear’. Of course, it was ladies like blind-folded Gandhari who had ‘amassed a sizeable amount of ascetic merit’, in the end.

And I've not even begun with the examples. Really, you’ll be damned!

The book has given fair space to the opinions of Asuras who had been vanquished by the Devas in the epic clash. Akhirsen, the demon king, enlightens Maya about the ‘pathetic inbred rodents… puny bastards… Devas’ who tricked them into losing the Amrita and relates to her the ‘diabolical propaganda engineered' by them. The demons tell us of Devas’ tales of ‘debauchery and perversions that would make a rock blush’ and the reader secretly nods, and then blushes. Shambara, Maya’s husband, wisely pronounces how there are ‘no good guys or bad guys’ and while history is written by the victors ‘only death ever makes a killing’. He even says ‘I fight because I will not be anybody’s bitch – and that is about as honourable as I can be’. We hear you, Shambara!

Make no mistake. The ladies of the Three Worlds in ‘Kamadeva’ are no chip of the old block. They are endowed with features that make divine loins shiver with excitement and also a tongue which when afire make bladders shudder. Except, the menfolk enjoy their temper troubles so much that pronouncing a curse to turn them into stone or mere mortals, or ‘using’ them as seductive baits to tempt ascetics out of merit are activities with no qualms attached. Even Krishna tells Pradyumma to help him for ‘there is a beautiful young maiden to be had as a reward’. Still, listen to this!

Kama’s heavenly wife Rati goes on record to say ‘illicit sex trumps a violent self-inflicted death any given day of the week’ but is clear as crystal when she states ‘I cannot and will not take second place to anyone’. Why, she even dares Shiva to ‘admit that you behaved despicably  … or I will strike you’. After a long journey to Earth and back, with Kama/Munna, her final word is that ‘I am sick and tired of all the fuss over the bloody soul’. Your thoughts too?

Rati is saddened to think how poor women have to remain trapped in stone when there ‘are people who have sinned simultaneously in thought, word and deed and they are free to roam’. Rambha, herself ‘stoned’ for a thousand years, forces Kama to hear her story of downfall and ‘don’t you dare roll your eyes at me, your Majesty or I will dump this jug … on your royal head!’ Kama of the cute-butt fame butts in to remind all of Goddess Durga ‘a mighty warrior despite her sex or even in spite of it’ and we know instantly why women loved him so. No jug was emptied on his head.

But if I were to love a woman it would be Maya, Kama’s Munna’s divine/earthly mother/wife. ‘All men are nothing but giant pricks’ and ‘not everybody has what it takes to be a good mother’ are applause-worthy. I also screamed an orgasmic yes, yes, yes when - ‘My dearest husband, I pray that in our next life, there will be a much-needed role reversal and I’ll be the man to your woman … I sow my wild oats with gay abandon and marry as many women as I feel like’.

In all of this, Kama, where art thou?

Everywhere. He’s the confident God of Desire whose ‘mind does seem to match the perfection of my butt’ up above the world so high where love is equal to ‘desire met sexual delight’. He’s not just important and relevant but intensely needed, really. His role in the book is of a hinge around which this window to divinity is opened for us by Anuja. His role in ‘his life’? Well, if the Lord of Heaven is to be believed – ‘you get to be exhibitionists without actually being exhibitionists, voyeurs without actually being voyeurs and willing partners in exploring the limits of your libido, while genuinely believing yourselves above that sort of depravity.’ How lovely, no! Even in his mortal avatar, in Munna’s ‘company the other boys found even cleaning latrines a fun thing to do’.  Such a charmer!

Not all is hunky-dory for him, though. Often, he’s the ‘sacrificial goat’ at the altar of political conspiracy, feeling like a piece of ‘dog turd’ even though not looking it. As Munna with his two wives, Maya and Rukmavathi, life is interesting – ‘One would drink the nectar of immortality and call it piss, the other would drink piss and thank the Gods.’ Sandwiched!

I would say Kamadeva should be feeling fortunate for all this, for had he not mused – ‘I will be lucky if I am remembered enough to be featured prominently in pornographic material; worse … lampooned as the divine pimp!’

Thanks to Anuja, we will remember him as all of that and more!

All the Three Worlds are on a stage, and Anuja the sole puppeteer-cum-ventriloquist of it all, with naughty Narada her sutradhaar. She has loaded the book with velvet-edged wit and loaded those witticisms with her opinions on everything that sacred texts stand for, and fail to stand up for. Towards the end of the book, the events as we know them take over and Kama, along with his enjoyable wit, hurriedly recedes to the background with a sagging narration and death of brevity. But that doesn’t take away from the book, or its neck-nuzzling end. Interestingly, the topicality of women's roles, marriage, idea of love, mothers-in-law, society, vamps, MCPs, sex, adultery, big breasts, etc. would magically transport you to your own society and its true-life reflection in TV soaps. With an ‘almighty dose of poetic license’ Anuja has truly shown how one uses laughter to make a point about the laughers themselves.

This book should be well-received by anyone who enjoys a good sense of humour and keeps touchiness at bay when it comes to discussing matters divine. Subversive, subaltern, sacrilegious, soppy Gods, sassy-seductive-Goddesses and lots of sex. If this doesn’t make you pick up the book, God help you!

[PS - I do wonder how those parents who have named their children after these Gods and Goddesses will receive the epithets lovingly reserved for some of their favourite deities here. Oh, I’ll be damned!]

'Kamadeva; The God of Desire' by Anuja Chandramouli is a Rupa publication, 2014

[This review was commissioned by Rupa Publications. Views are my own.]
Posted by Sakshi at 04:52