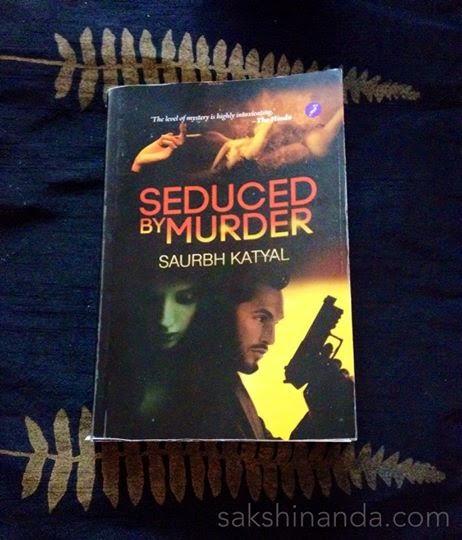 If books were to be judged by their covers, I would never have picked this one. An amateur attempt to show what the story within is about does not do justice to Saurbh Katyal’s ‘Seduced by Murder’. At best it (mis)leads you to believe that a smoking and hot woman is involved. What is this murder mystery about?

Vishal Bajaj is a corporate rat in a race which he wants to exit, because he wants to feel ‘content with being rather than becoming’. A maternal uncle’s death brings his way a one-room office and a desire to restore order in people’s lives, by wearing his uncle’s shoes and becoming a detective. ‘Cheating-husband jobs were my core competency’ up until his old flame, Aditi, seeks his help for investigating the murder of her husband’s brother. With Pranay, his sidekick and Babu, the police officer on call, Vishal works against time and the affected family’s desires to close the case in order to find the killer and stop the corpses from piling high. Spicing his need for alcohol with regular doses of wit, Vishal’s single-handed investigation forms the crux of Saurbh’s ‘Seduced by Murder’. Which means, both Vishal as a character and his methods of investigation form the premise this novel’s narration rests on.

If the author did not have us believe that he works in the corporate world, I would have thought he is a private detective himself. Or is he, in his free time and on the sly? For how else would he be able to create such a well fleshed-out personality as that of Vishal's?

In the protagonist of this novel we find a real and believable man; intelligent, of course, but also presented with all his vulnerabilities. There is nothing superhero-ish about him (except for two fight sequences, whose grandeur is forgotten the moment he catches a fever simply by getting wet in the rain). He unravels the mystery by relying purely on circumstantial evidence, logic, timely articulation and a regular supply of tongue-in-cheek humour. Not just who he is, but how he is characterized as the book progresses is something to notice too, as Saurbh gives equal space to the detective that he is without as the conflict-ridden person that he is within. His loves and his losses form a quiet backdrop to the action happening in the fore, especially Vishal’s relationships with his booze and with his past. Which essentially means – he is etched for the readers through his dialogues as well as his narration of the story.

However, what remains most impressive about this man is his power of observation, his eye for reading characters and his ability to make us see them through his portrayal. He speaks directly to the readers to reveal characters to us so convincingly that we trust him blindly. Even when he is driving and drinking!

The level of Mystery

Think back to those old Bollywood movies where crimes were investigated by detectives who came built in with an articulate mind, a good degree of foresight and at the most a magnifying glass in their hands. Where footprints to tyre tracks and gestures to signals helped solve the most heinous crimes through the detectives’ hawk-like eyes. That is ‘Seduced by Murder’ for you, in print. By completely relying on the human ability to solve crimes sans gadgets and radars, GPS and supercomputers, Saurbh has created an authentic detective novel with a strong old-time flavour. Three things help maintain the level of mystery high at most points of the narration:

The one aspect that propels the story forward even more than incidents are the series of clues discovered at the scenes of crime or in peace time. Through eyes or vibes, noise and lights, gestures and objects; catching a standalone word or by noticing the missing grief on someone’s face; even sniffing the smell of deception or seeing a father’s swelling pride. Hints and clues inch the story-line forward at varying speeds and with different degrees of success, as Saurbh wills, of course.

Then, answers are sought scientifically and unravelled with clinical precision, from point to point. This leaves very little room for dramatic situations and personae. Each character is serving a sane role in the scheme of things, without running amok with a knife in hand or surprising you with a gun shot in the head. This also helps in keeping the plausibility of the story from dropping. For this reason, 'Seduced by Murder' does not aim to thrill or chill but keep you firmly grounded in intelligent investigation.

I recently learnt about points of tension/twist which need to be present as well as be spread apart just right in order to keep the reader involved. On the 25th page itself Vishal announces ‘this meant … the murderer was staring at me right now’. The reader is instantly set thinking. Then, with just 25 pages to go, we hear ‘It was all so evident that I was surprised I had missed it’ and we wonder if we had been on a wild goose chase all along too. Throughout, as Vishal changes tracks, he keeps you on your toes too. Multiple such turns, many intentionally misleading, keep you engrossed and guessing till the very end. When Vishal finally and with full conviction 'locks eyes with the murderer, and he pales,’ another heart beat of a fully-involved reader is skipped. The mystery still remains far from solved!

Alas! I smell some problems.

Vishal and Pranay’s relationship is portrayed so well at the start of the book. Standing in direct contrast to each other, the two as a team would have made a perfect Indian answer for foreign detective-duo imports. It was not to be, because somewhere in the beginning of the action Pranay takes a back seat, and goes missing. Mysteriously! Why? Is it to aggrandize Vishal and keep the limelight on him from getting diluted? Or, did Saurbh forget the absent-minded, bumbling yet endearing role Pranay played in Vishal’s investigative life? I wish I had seen more of Pranay.

Babu, the police officer, comes across as a type borrowed from a comedy movie rather than one investigating such a high profile crime. He seems too naïve with ‘I got … carried away’ being his best defence for derailing the investigation at multiple points. He could have served as a foil to Vishal in so many ways. Not that that would make his lack of investigative “skills” any plausible as a man heading this murder's trail.

I don’t know what the last chapter is doing there, especially since Aditi’s seductive presence has either been missing from the scenes or been immensely unhelpful in carrying the story forward. For that exact reason, I would have titled the book differently too. Or was the title an attempt to mislead, making this, my comment, a spoiler?

‘Seduced by Murder’ is a brave risk at writing a murder mystery, not just because it is old-fashioned in its execution but also because it is so sparsely populated by characters that it runs the risk of getting predictable. I could not predict the end because the continuous stream of the narration left no time for me to think, which speaks for how well the sequencing of events is done. What makes me happy to see is how Saurbh has lent a proper Indian flavour to this murder mystery –  the characters, the habits of the police, the real estate trade, the socio-economic ramifications of murder in a high-class family and even the way the press hungers for scoops. The book is simple (not simplistic), interesting and unpretentious. For those of us who enjoyed detectives with magnifying glasses in their hands will enjoy this book. At this point all I can say is 'I have a hunch … let’s see’, as Vishal would say.

[This review was commissioned by the author. All views are my own.]
Posted by Sakshi at 05:11