An old fashioned song, on his 100th

‘The old folks don’t talk much’? John Denver did not get it right. Or maybe that’s because he never met my grandfather. Old folks can talk a lot, I tell you. Mostly, about things and incidents from the longest time away, as if memory starts ageing backwards and what remains freshest in their mind’s eyes are those choicest of images from younger days, cherry-picked – to be mulled over in free time or to be shared. With grandchildren, first and foremost. What a fortunate relationship!

Two days back, my nana ji turned 100. No, not on Earth. I have no conclusive proof of better places but I do know that wherever the dandy went he must still be wearing his best skin, and not just because it’s his birthday. Some gentlemen are like that. It’s their birthday, everyday.

You know how it is after a certain age. You start preparing for your exit. Not that you are ready to go, no matter how much you say otherwise, for who knows what reality unknown lands may hold? So, they prepare – in worldly matters and matters spiritual, clinging on to the former and clasping on to the latter for dear life.

'They are rich they are poor' makes me think. The will is signed with bad eye sight but eyes which have learnt to see people much better. See through them too. That gets done and dusted, signed, rolled up and locked in, before the ageing mind plays tricks of its kind. But that’s serious business, and I am digressing into a mood I don’t want to. This is about him as my grandfather. Why get a will into it?

Where was I? Ah, rich-poor. Perhaps as a way of acknowledging the big number, my nana ji started a ritual after he turned 80. Every birthday he would give us four cousins money which equalled his age in number. Did not leave him much poorer but made us all so rich. Or was this his way to keep us looking forward to the increasing numbers? Praying for them too? Maybe. He alone knows. I for one enjoyed the pocket money. And still wonder how hard he must have worked to arrange the exact change.

The paan wallah at Astley Hall chowk must have helped.
Their homes all smell of time
Of old photographs
And an old fashioned song
Though you may live in town
You live so far away
When you've lived too long

Oh, for sure their homes smell of time. Time has a smell. And by the time it takes its toll on your senses, your nose is the only one which cannot smell it. The young may pucker theirs because odours from balms and favourite woollens, newspaper clippings and boxes with precious little are not something they can take for long. Others who stay around the old get so used to it that a house scented with designer candles would make them want to throw up.

My nana ji had lived a glorious life, which found innovative ways to be preserved. Why not! A wooden cupboard which went from being an out-of-bounds treasure trove for our children's eyes to one which creaked, always ajar, as if asking desperately to be noticed. Right behind where he lay. In it we believed were things from his past, though no one really ever found out. The finest suit pieces he wore, the diary which documented how he never lost a case in his life, odes to Gandhi when socialism became an obsession, a wrist watch held so dear that it ticked away its life hidden from all eyes. And a radio, the sight of which will make you smile. Silent now. A life and its times preserved, to be rummaged through in the middle of the night. When sleep refused to come, or a nagging ache kept him awake – in the heart or in the mind? No idea! To think of it, I never slept next to him. Never spent the night with him. I wonder why?

But, what’s the point.

Can laughter reach a ‘too much’ point? The teeth may go, the lips wrinkle, but there’s more to laughter than just that. Or so I think. Why else would he guffaw remembering us four tots playing 'Paploo' with playing cards till his dying day? Must be the joy of seeing us kids together. Just for that I would swallow this inherited pride and become Miss Paploo all over again.

His voice was cracked but what could act a dam to the flood of stories he came with? Stories from old folks that make us travel to scenes and situations which no children’s story books contain. A world used to open in front of our hungry eyes. Fergusson College, Lahore to High Court, Allahabad came alive with his voice. Dehradun in all its lost glory, with its clubs and bars, and the Rs. 2 shared-auto experiences when coming to meet his grandchildren. If only words could translate into pictures, real pictures to hold and slide into family albums, what a collection I would have had today to boast about.

The scene he recalled the most, and with utmost pride, was the one that unfolded between him and a Brit lawyer in a bar. Where he overheard ‘Hamlet’ being discussed at the white table, being quoted incorrectly. Oh sacrilege! He went over to repeat the soliloquy and gained a friend for life, that is once the incredulous look expected on hearing an Indian quote Shakespeare verbatim in those B/W days was washed off his white face. And then down with good whiskey. This friend flew home to England and left behind ‘the house with a 100 rooms’ - the one in Doon, the one especially constructed as if to play hide-and-seek in. With the gate that opened every evening at 5 pm to walk the kids to the dairy. Fresh cow’s milk, and an excuse for the cousins to meet!

Tears? I remember none. None of regret, for sure. He was a proud, proud man. Perhaps, that helped with keeping the back straight till the 92 years of his life. Kept him fit and fine. And he tried, tried his best to make us four as proud of ourselves as the ripest plums are. My cousin was to work towards becoming the finance minister, and I was to do a Ph.D. She’s at it, getting there with her love for numbers and scores of yore which made him go into extreme states of beaming happiness. I quit. I could not complete my Ph.D like he dreamed. Maybe he went too soon. Or maybe, I was just left without any inspiration any more.

Then comes a point when their thoughts become their confidants. It happened with him. Slowly, but surely, he was busier with them than with us as if they had replaced all of us. Sometimes walking on a street in Pakistan. The next moment attending Gandhi’s talk in Delhi University’s gardens. When he came out of his reveries, panic would strike. A phone call to my father to come, hurry, something is happening to me. False alarms. Or fear? The tallest, most regal succumb to the fear of the dark valley. The sharpest of minds end up not recognizing their own kith and kin. That's what happened with him. One day he thought I was the nurse, another day another stranger. No longer his granddaughter. It hurt, in his last days.

But then, what if we were to believe that they reach their new worlds much before they leave ours? Maybe, it is indeed a beautiful homecoming after a glorious journey on Earth is done?

Yes. Just the thought that I was looking for. 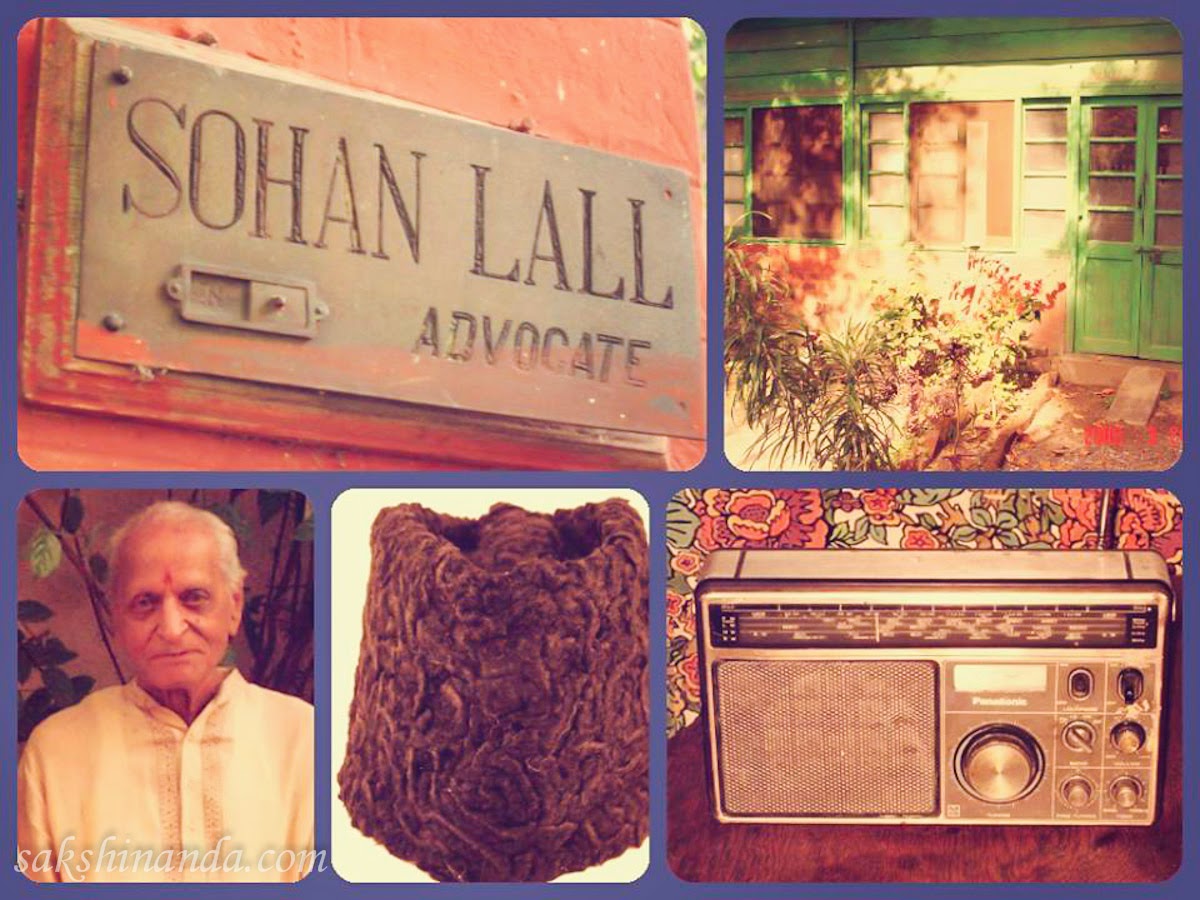 The old folks never die
They just put down their heads
And go to sleep one day
It doesn't matter now
The song has died away
And echo's all around.


[Written for WordPress Daily Prompts : 365 Writing Prompts. The prompt for today was - Prompt - Take the third line of the last song you heard, make it your post title, and write for a maximum of 15 minutes. GO! – I picked “Old Folks” by John Denver.]
Posted by Sakshi at 19:11