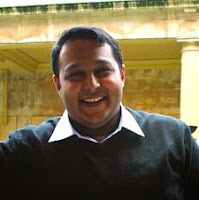 This Sid needs no waking up. He's found sitting at his desk in i Wrote Those before the birds tweet the first tweet and is seen writing way beyond the last computer shuts for the night, at least on our side of the globe. Sid Balachandran is a super-man to many. He is a prolific and versatile writer, a fun and loving dad and an at-your-service husband, or so his blog reflects. His writings make you laugh at yourself, nod in agreement whole-heartedly and impress with the parenting gyan he has to share.

While he shuttles at mach speeds between the roles he plays in real life and the posts he writes in the virtual world, a lot of us sit wishing we knew the secret behind his energy. It could just be the home-mulled wine he drinks to spread good humour and cheer around.

Cheer reminds me! Seldom do you meet a writer who is as appreciative of your work as Sid is of those he likes to read. Goes to show he is reading and assimilating, apart from writing, and is willing to evolve as a serious writer even as he keeps his funny bone polished and ready to tickle and be tickled. Plus, he already knows What Guys Want and about Interpreting Women. All this, after Mr. Murphy helps him deconstruct parenting. I know he will go a long way, and for that I wish him luck.

It’s one of life’s unpleasant truths. The fact that couples argue. Yes, some of them (or us) may deck it up in fancy phrases such as minor disagreements or misunderstandings. But the crux of the matter is that any couple in a healthy relationship will argue. And why wouldn’t they? After all, they are two different individuals, often from completely distinct backgrounds with their unique outlooks on life and its idiosyncrasies. And there is no other room in the house that hosts more of these “disagreements” than the humble bedroom. Before we let our ultra-imaginative minds wander off without a tether, I’ll just confirm that I’m not talking about the physical act of love. Or pillow fights. They both deserve separate posts.

Before I go ahead, here’s something that I usually both prefix and suffix most posts with. Yes, a disclaimer. The “activities” described in this post aren’t always a Man V/s Woman thing. It could even be a Man V/s Man or Woman V/s Woman scenario.

Premier Inn, a rather well established hospitality chain in Britain, managed to put together a survey, not so long ago. The survey was mainly aimed at heterosexual couples that slept together (i.e. in the same bed). The results of the survey (about 2000 people were surveyed) showed that on average, couples fought about 167 times in a year in the bedroom, over a number of reasons. Of course, “fight” might be too strong and physical a word. So let’s coat it in a bit of sugar, and say, “bickered”. Let’s take a look at some of the reasons, shall we?

The attack of “the blanket hogger” 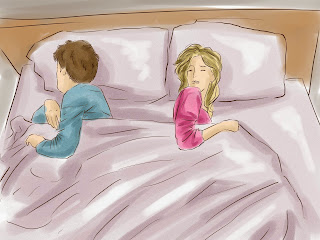 In terms of “activities that cause boudoir discontent”, this probably ranks way up there. Let’s look at this example. Person W (hence forth to be referred to as Ms. W) loves to be wrapped up like an Egyptian Mummy, failing which sleep is quite arduous to come by. Person M (hence forth to be referred to as Mr. M) is not that fond of blankets in general. He’s more of a free spirit and will normally only use a blanket as the last resort. Kind of seems like an ideal scenario, doesn’t it? Fast forward to say 1 am. Ms. W finds herself shivering. She opens her eyes, only to discover that her blanket is now being hogged by Mr. M, who ironically gave her the long lecture about not wanting any blankets in the first place. Thereby ensures the vigorous battle for ownership of the blanket, which finally ends in a truce, with both of them agreeing to share the blanket, but not before they’ve both lost out on some quality sleep time.

Certainly, the obvious answer to this would have been for both of them to have separate blankets. But then, cuddling becomes a slight issue. Hence they prefer to have one large blanket. But here’s the thing, even with separate blankets, co-sleeping couples may still find that one of them has to invariably fight for their share in the middle of the night. 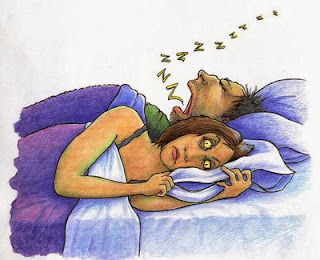 Men do it. Women do it. Why I’ve heard 20-month old babies do it. From time immemorial, snoring has been the undisputed leader amongst the primary causes behind bedroom brawls.  But yes, of course men take the flak for it; well at least the lion’s share of it. And no, it’s not without reason. The thing about snoring is that it’s usually a one-way street. The only person that isn’t bothered by it, is the person who’s rumbling, rasping and grunting. I understand that there could be plenty of reasons for this “phenomenon”. Sometimes it’s a medical issue whilst some other times, it’s just too much of beer. But if your partner is a light-sleeper, don’t be surprised if you’re frequently woken up in the middle of your deep slumber with a series of pokes and prods. Of course, you could always gift him/her a pair of earplugs :).

The Fireplace V/s The Icebox 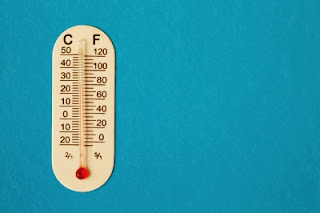 Some like it hot and some like it cold. The room I mean. The challenge is often finding the middle ground. And the weather or month rarely makes a difference. You need the comfort of a warm room to sleep, whereas your partner would rather have it feel like an igloo. The biting cold forces you to make more frequent trips to the washroom, when you’d rather be trying to sleep. On the other hand, a warm room makes your partner complain about how they find it difficult to fall asleep in a pool of sweat. The easier solution would be to try using a table fan for the Iceman (or woman) and an extra single blanket for the heat seeker. 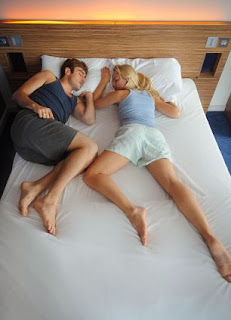 I’ve been woken up, far too many times, from my deep slumber with the phrase “Get Off Me” ringing in my ears, No, it’s not what you’re thinking of ;) The thing is, I’m a sprawler. And of course, that means that my legs (and other parts - hands et all I mean) often cross over into my wife’s territory, sometimes even attacking her. Until quite recently, I used to think that I was the only one with such a problem. However some in-depth Google research and random survey results from strangers have shown me that I’m not alone.  If you still would like to continue sleeping in the same bed, my request would be to invest in a larger King-Size bed. Trust me, those extra 16 inches help. The bitter truth is that, when it comes to beds, just as with other private zones, size does matter. I meant a larger bathroom. What were you thinking about? :) 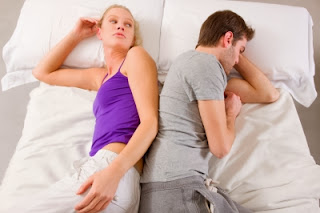 This might not be one of the most common reasons for most bedroom brawls. But it’s a matter of habit, and hence worth mentioning. Most couples in a relationship usually have their preferred side of the bed. And it often remains that way. The subject only crops up when one of you fancies a change in the side, for reasons unknown to the other person. We all have our reasons to choose which side of the bed we’d like to sleep on. For me, it’s usually the one closest to the door and away from the wall. What’s yours?

Switched On or Turned Off 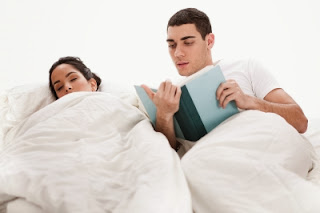 This is another one of those seemingly teeny-tiny frictions that have the potential to fire-up discontent in the bedroom. Lights - On or Off. Even though we’re both bibliophiles, there are days when I want nothing more than to read. And ironically those are often the days she just wants to sleep. The tables have been turned quite a few times too. So the light becomes a bit of a challenge. Of course, this is one of the easier things to solve. Just makes sure that there are reading lamps on both sides of the bed. Failing which, you can always get one of those small reading lights that fixes onto the stem of the book.

Apart from the occasional delays, timing can make and break relationships. I meant the timing of going to bed, that is. Of course, there’s a saying that “couples who go to bed together, stay together”. But sometimes, it just isn’t possible to retire to bed together, especially if you have young kids. Or if you have different work timings. Talking about timing, another one that often causes a bit of tension is how quickly you fall asleep. If both of you are lucky enough to nod off to sleep as soon as you hit the bed, then this point isn’t really relevant to you. With most couples, some of the most delightful conversations are held under the darkened ceilings of your bedroom. However the thresholds for each person varies slightly and should you find yourself dozing off while listening to your partner, then be prepared for battle the next morning.

Come to think about it, it’s rather ironic that these seemingly trivial little rituals have the potential to cause displeasure in the bedroom. After all, a little loving tête-à-tête can provide amicable solutions to most of these.  But then, they do happen. Because sometimes the simplest things can cause discontent. And that my friends, is the ugly truth behind bedroom brawls.