Saurbh Katyal’s ‘The Invisible Woman’, on the mobile 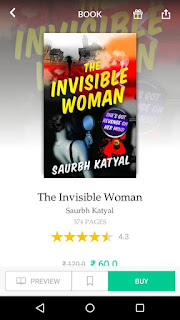 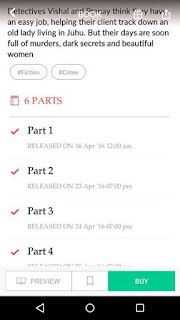 Readers need books. Books need to be read. No surprise then that what were unimaginable media of reading, once, are now a reality. Where once it took heart to give up paper for screens, we’re now embracing reading even on mobile phones!  Saurbh Katyal’s The Invisible Woman is the first book I read on the Juggernaut App. Let me tell you how it satisfied my twiddling thumb, for I cannot dissociate the book from its medium this first time. 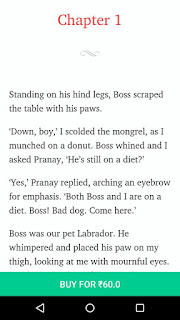 We met Vishal Bajaj, the detective-protagonist of this book, in Saurbh’s previous novel ‘Seduced by Murder’. He continues how we remember him last - real, believable, intelligent and also vulnerable. With Pranay, his partner in solving crimes, he is ‘forced to work on any case that came our way’. Money is tight! Along comes Sangita one rainy afternoon, with what seems like a simple spy-on-an-old-lady-in-Juhu-and-get-me-a-picture request, in exchange for a huge amount of money. Obviously, there is nothing simple about this woman’s request. There are wheels within wheels, sub-plots inside the main plot and a thick rope of mystery looping around the handful of characters at a steady speed to finally tighten like a noose around the murderer(s). All this happens in 48 hours at breath-taking speed! But not before Saurbh Katyal delivers a murder mystery with his characteristic imprint all over.

What are the elements of this characteristic style, which not just make his book an entertaining read but also well-suited to be read on a phone?

A sepia-coloured simplicity, which takes you back to old Bollywood mystery movies, coats his stories. Those times from long ago when more than gadgets (unless a magnifying glass can be called one!) it was the detective’s ability which sniffed out a crime trail. Murder investigations had tools like the investigator’s hawk-like vision, intelligent foresight and a talking gut. A detective wore an over-coat, but it didn’t spill out radars or thermal goggles. It just helped him spy in the rain, or keep his face disguised. Vishal Bajaj is one such creation, and rather unique in his ilk. More often than not, it is the talent he has seeing two and two add up to three, and not just when he is delightfully inebriated, which helps propel the mystery forward in the urban belly of ‘The Invisible Woman’.

‘I may be wrong but I want to be sure,’ says Vishal, before following a trail. Alongside we follow. The reader is Vishal’s constant companion, privy to his thoughts, observations and vulnerabilities much before anyone else. Like a confidante for his most unflattering thoughts about women or more importantly, the strewn clues to the murderer. The book is teeming with blink-and-miss details. There are scorpion tattoos on fair skin, people gone missing or secretly colluding, Aadhaar Cards and Facebook, gun shots and cliff hangers, motorbikes in the rain, dustbins and garbage, alcohol and organs, eyes in peep holes, corpses in Lotus position and then those innocent confessions of servants like ‘But when he was lifting the trunk and placing it on the carrier . . . I heard a sound of something moving . . . something rolling across the trunk . . . so I know that it was not completely empty.’

A lot is going on, and the reader is not just involved but occupies a position of privilege I’d say, one which even Pranay does not. If Vishal could share a drink with us, he would, as freely as he does opinions in his characteristic I-don’t-care-if-you-judge-me style. I will ‘always remember that men in ponytails and tight pants are either yoga teachers or fashion designers. Not cops.’ Well, it helped him solve crimes, so!

The sparsely-populated story moves back and forth at a gripping speed, with short, snappy chapters closing on open threads, and quick-changing scenes taking us to myriad locales in Mumbai – from plush bungalows to apartments, from dangerous suburbs to seedy hotels where ‘the room was only supposed to be used, not admired.’  The story thickens as the role of every character in the bigger puzzle comes into sight and Vishal has to separate wheat from chaff, knowing how so many characters ‘talk a lot and say too little’. A well-laid plot leaves the reader match steps with footprints, with Vishal. The story of ‘The Invisible Woman’ is not as linear as that of ‘Seduced by Murder’, but it isn’t too fashionably complex to make you feel the effort either.

Unlike in his previous book, Saurbh’s latest closes with a series of action scenes, the dhishum-dhishum kind! So while in ‘Seduced by Murder’ we saw little muscle about Vishal, endearing the readers towards this very ordinary yet extraordinary man, in ‘The Invisible Woman’ we see him landing blows and ducking bullets with a superhero-ish zeal. A filmy feel is predominant towards the end of the book. If ‘curiosity could never kill this cat’, it seems neither could a bullet hit Vishal. But then ‘I always submit to drunk, angry men who have tied me to a chair, so I sang like a canary.’ Which is to say, he always knows what he’s doing, and why.

Frankly, if I were to choose between the story and its detective, I would pick Vishal!

I remember observing with regret the last time around how Pranay as his detective partner simply faded away to finally vanish out of the readers’ range in ‘Seduced by Murder’. Now, ‘The Invisible Woman’ begins on a note of great camaraderie between the two partners of the agency, but yet again, though Pranay is around, he somewhat recedes into the background. For instance, even in the deadliest of scenes where Vishal could simply call him for help, he doesn’t think of keeping Pranay in the loop. Why? Some other problems I saw as I read are to do with descriptions of gory scenes not being, well, gory enough and Vishal's physical description totally missing in the book. Also, when all the threads are being tied up, I wish we weren’t eased into the revelations but awed into them. That bit fell flat on impact.

‘The Invisible Woman’ does carry forward Saurbh’s classic mystery-writing style, and one which I as a reader enjoy with nostalgia in a world of overtly convoluted and complex crime thrillers. What is also apparent, and Saurbh always has an underlying “point” to his mysteries, is the aim to remove facades – which hang like expensive drapes or appear like cheap lipsticks – from our urban living. To really show what lives and transpires within. Just like his star detective, Saurbh’s stories come from our very Indian context, showing much more than just telling a tale. Certain social issues form the premise on which a woman’s revenge unfolds in this book. Once all threads are tied up we are left musing over the very human foibles that form each of us, the questionable motives that can drive us and the conscience we must keep alive, at the end of the day.

Made for a quick, unpretentious, entertaining and marginally thought-provoking consumption, my expectations of a mystery-on-the-mobile were met rather well with ‘The Invisible Woman’.

'The Invisible Woman' by Saurbh Katyal is published on the Juggernaut App, 2016.

[The review was commissioned by the author. Views are my own.]