God is in the details in Rajiv Mittal’s ‘Brahmahatya’ 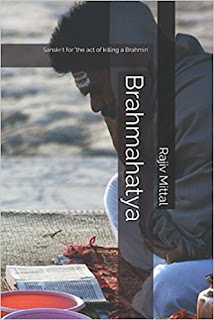 The Prologue to Rajiv Mittal’s ‘Brahmahatya’, with its absolute finality of ‘what is over is over’, draws you in, immediately. Is it a sigh of relief, this sense of closure right at the start of a book? Or is it a tone of defeat the book whispers in? The curious unhurried juxtaposition of a priest getting dressed and a man trying to be ‘old enough to be his father’ just a page later only adds to what seems like a very unusual start to a book.

The story of ‘Brahmahatya’ is at once tragic and triumphant, banal and sacred, real and unreal, of this world and another. The book is ripe with episodes from Hindu mythology and excerpts from ancient scriptures which are appropriated by the characters to understand their circumstances, or by the author, in order to move the story forward.

Govindarajan Memorial Residency (GMR) is an old age home in a Southern state of India. Most sponsors of the aged residents, like Ravi the protagonist, live overseas. The fee for care-giving and for funerals is duly sent, keeping oiled the wheels of this plush retirement home, comfortable but speckled with greed and politics. The residents ‘were historical but they definitely were not works of art in a museum; these were crumbling.’ The atmosphere is one of a ritualistic sameness of routine and a smell of medicines, decay and death.

Bhavna, an employee at GMR and a single mother to a child with cerebral palsy, is struggling to keep her home and work in order when Ravi enters GMR with a sick father. He’s looking to admit him there so he can go back to his life of work, insomnia and loneliness in Dubai. Dr Chari, a temperamental man with little love lost for his patients or his profession, whimsically refuses Ravi’s father admittance. Mr. Narasimhan, who turns out to be Bhavna’s maths tutor from school, is left in a ramshackle old-age home instead, where he dies a silent death. With nothing but an intense sadness and a roaring rage against Dr Chari, Ravi comes back to GMR. The story follows this ‘confused and confusing man’, with his 'tamasik’ tendencies threatening to crack him, and the world of GMR. There is a sense of the macabre, a derangement, something sinister always in the air. Something being plotted, something else being subverted. The mad old lady from unit number three adds to the plot her own stories, going from ominous to comforting, seemingly without method.

God is in the details when it comes to the characterization in ‘Brahmahatya’. We compliment an author’s characters when we see them in flesh-and-blood. Rajiv Mittal’s characters go beyond that. Of course, each of them has his trademarks. There’s Sridhar, the Secretary, with ‘the habit of nodding his head whenever he had no idea what was happening’. Dr Chari has never been seen in public ‘without his srichurnam, the single thin vertical red line drawn in the middle of his forehead’ and Dr Kasturi who used ‘the word ‘strange’ in the same way I would use the word ‘wonderful’. Each character plays a role. But what is most noteworthy is how their internal conflicts are portrayed such that they become the characters. In this post-modernist world where a meaninglessness envelops lives, the character portrayals often lead to a spectacular, and touching, revelation of their souls! Ravi’s father is mortality shirking its own reality, with a child-like defiance to be independent yet a secret acceptance of fading times. Ravi, an epitome of loneliness and guilt, ‘yearned to feel wanted’. Revenge gives his life a purpose, and him a motive. Bhavna dithers between being good and sinning, remaining torn and tested. The old lady from number three, symbolic of disregard, ‘was not a woman who had gone mad; this was a woman who had chosen madness’. Her stories help others in GMR understand their predicaments. To find answers. To hold on to … something! Anything!

God is not just in the details, but also omnipresent in ‘Brahmahatya’. The book is an exploration of many kinds of relationships, including that of the very real characters with the Divine.

First, between humans. Many bonds are presented beautifully, like Bhavna’s with her daughter, Laxmi, and Ravi’s with Kasturi. However, it is the complexities of Ravi’s relationship with his father which stirred this reader the most. Guilt, awkwardness, hesitance, faux indifference and secret love mark it. From the day Ravi ‘slowly’ goes to meet his hospitalized father to the day of his cremation, an unhurried unravelling of their relationship grips you … till you choke on the realism of it all. The sudden mood change from the assurance that ‘Dad would know … his outbursts in front of the old man were always triggered by concern and fear’ to the old man starting ‘the next cycle of making him feel small again’, the battle is constant. Both, the intricacies of growing old and growing up are heard as silent sobs in their throats. One becomes the other, ‘the indentations on the right slipper were deeper, same as dad; the same spinal curvature’, as Ravi seeks a desperate reconciliation with his father’s death, and his memories of him.

‘Brahmahatya’, through its many references to ancient scriptures and the use of Sanskrit words, is also a narrative on man’s conflict-ridden relationship with the Divine. It is this that gives the book a timelessness, even as it raises ever-pertinent questions about rituals, faith, free will and karmic destiny.

Faith is almost a character in itself, arriving as a strengthening presence when Bhavna is looking for it, or when Ravi has given up on it. The idea of sinning is not far behind, then, and neither are superstitions. There is some humour, like Shridhar, while watching a porn film ‘was feeling Bībhatsam; disgust whose aura is blue. Is that why they called them Blue Films?’ But mostly, there’s gravitas, and lovely philosophical questions. ‘Is one of the messages of the Samudra Manthan that to get nectar, it is first necessary to consume poison; if you survive the poison, it becomes nectar?’ becomes the spine that the plot turns around. The appropriation of ancient scriptures to this contemporary story is painstakingly done. This is apparent through the voices in the characters’ heads, which the readers are made privy to, and where debates between "right" and "wrong" rage. Where their relationship with god is forever in flux…

‘Ahalya. As usual, a man’s interpretation of a story written by men for men. She had felt like laughing at his self-indulgent stupidity, and then she felt like a sinner because of that.’ This is Bhavna, shuffling into rebellious domain and then ‘striking her head on the floor several times in penance, although unsure why.’ Lost? Confused? Real! The ropes of faith and superstition for her are stronger than the threads of subversion. Perhaps the significance of rituals and symbols was to impart to life’s circumstances a comforting pattern of hope and wishful thinking?

Every character you meet is surprisingly well-versed in the scriptures, and mostly at ease with the teachings. Except Ravi. His struggle with faith and no faith forms the crux of the book. As a son listening to the ‘inconsequential murmurings of the indifferent priest’ over his father’s pyre, he needs god ‘not for help. For explanations.’ He’s angry. ‘Why don’t you show your presence here? Come on out, I dare you.’ As always, the gods used silence to silence.’ For the most part of the novel, the reader is his closest confidant. The unhurried pace of the story complements the unhurried unravelling of Ravi, and the reader only feels closer to him. Will there be an affirmation of the Divine in the end, as the events of the book spiral towards a climax? And just like the white smoke from his chillum, a fog of questions emerge to surround us.

And one of my favourites is the classic destiny versus free will debate. The causality in ‘Brahmahatya’ would make for a worthy study!

While getting his father admitted ‘Ravi hoped his dad’s karma was good’. When karma fails them, he swears to fulfill himself the few wishes that he had. While Ravi contemplates one crime to the next, he never stops othering the causes - 'What were the forces that were forcing him to actions that would have such terrible consequences? Was this just another act in a play that started with the death of his father? Maybe the play had started as soon as he was born, perhaps it started earlier...’ Human agency versus the divinely ordained. This is where the philosophical weight of the novel rests.

Bhavna, for the most part, negates human will, which also leads to the scientific and the supernatural warring within her. She’s a woman of science, but believes it was god’s hand that her daughter was born thus. She believes Ravi ‘has no right’ to punish evil. Only by the end of the book does her final resolve to ‘liberate my daughter from the curse… I will do it myself’ becomes the point where free will and destiny meet. At a point of duty and love. Hadn’t Kasturi remarked, ‘Fight you will, your nature will make you fight. Your karma will make you fight. You will fight in spite of yourself’. They are not mutually exclusive, after all.

There do appear a few things about the book which bother me.

Is the book suggesting that a loss of faith in the Divine can only lead to violence and self-annihilation? You also find references to the superiority of Brahmins and Brahminical qualities in the characters, almost to the point of wondering if Ravi’s problem with Dr Chari was not so much that he failed him but that he failed Brahminism and its aspirations. Is this the author’s belief or is this his critique? Answer for yourself as you read!

Then, was Dr Chari really responsible for Ravi’s father’s death? Could the son not take him to Dubai? And what if his death was simply pre-ordained?  Ravi managing to live unnoticed in GMR, with no test revealing his age, is implausible, but not as difficult to digest as the supernatural turn of events in the last part of the book. My biggest problem remains with this last aspect. I wish the book ended not with a twist of a fantastical magnitude but with the same quiet, unhindered and steady chant that runs through the book. Unnecessary details about GMR’s functioning and some odd sentences like – ‘Thursday whole night, she could not sleep,’ or, ‘The forgiving voice of Mr Kasturi again.’ could have been edited away.

‘Brahmahatya’ is a stirring book, at once heavy with sadness and light with a beauty which one may call … divine. How the universe and all its beings conspire to make a son understand his father in his death, and understand his death itself seems personal … and felt. It ends on a note of calm reconciliation, even though it remains upon the reader to weigh the cost at which this peace has been reached. Some discomfort will ensue. Some suspension of disbelief will be needed. Some bits of faith will be tested, and some reaffirmed. But that’s what you’re looking for in a book when you’re looking for a book to last you your time. Isn't it?

'Brahmahatya' by Rajiv Mittal is a self-publication, 2017