Bringing the Rainbow; The Hindware Story by RK Somany 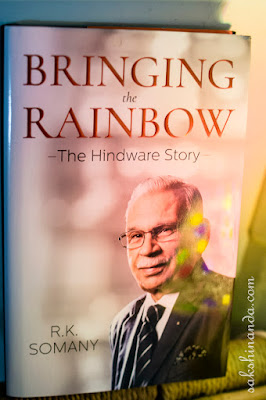 Once, while driving along a rutted mud road to Bahadurgarh in a bouncing old Morris Minor, RK Somany saw a rainbow suddenly appear. The heat, the dust and the fretful uncertainty of getting land for his plant was forgotten, and ‘a chore became exciting. Ever since, the rainbow became my guiding mantra. In whatever I do, as a businessperson, a father, a husband, a friend and a family man, I ask myself: ‘Am I bringing the rainbow to this? The passion, the excitement, the colour?’

No wonder then that RK Somany titled his autobiography ‘Bringing the Rainbow; The Hindware Story’. And no doubt he tried to bring the rainbow into this book too. The story is about how Hindware went from a newbie to a market leader, surpassing the country’s economic handicaps, everyday business challenges and even personal impediments from within the Somany family.

Autobiographies create a glorious canvas of context – historical, political and cultural. The story of a person comes riddled with important events from which he, and thus the reader, draws valuable lessons. They provide us with a deeper understanding of the subject they are written around. And they make for interesting literary reading in that the reader looks for omissions in the narration and hesitant gaps in the narratorial voice; those moments which make you wonder – is this his recollection as an adult or an uncoloured version from his childhood?

The telling of the tale. The home and the world.

RK Somany tells the story as if it is being meticulously recalled for a live audience. So while sometimes the narration is linear at others he shifts between the past and the present. While he does that, a panoramic picture of not just his life’s events but those happenings which beset the times also gets painted. What comes through is a visual of both how the businesses were run and how families were too.

RK Somany was the ninth among eleven children, brought up by his eldest brother, Hiralall, after his father’s death when he was seven. Those were times of ‘centrality of morals’ and when older brothers were near-bosses, who set standards and conditions! But who also patrolled the house with a rifle during crises like the Great Calcutta Killings. Good words carried worth, good families even more. School admissions and membership of Exchanges and Clubs happened based on reputation. And yet, under the same strong family umbrella came a scheming sibling, two mysterious deaths and some more “bad blood”.

Business was never usual in times of historical flux and ‘life wasn’t all glamour and fun.’ Red tape, black markets, ‘blinkered government policies’ and socialism made private industry seem suspicious. There was very little market intelligence and data to base decisions on. Add to that infrastructural woes like power cuts and ‘inspector raj’ in a place like UP, and later the Emergency with the ‘draconian MISA used to intimidate businessmen’ and the financial crisis of 1991. Hindware had many tides to overcome, and ‘Bringing the Rainbow’ shows how RK Somany did just that.

As one reads what comes across as a ‘business saga’, one notices significant events, professional and personal, which made Hindware a household name. And which made RK Somany the man who is speaking to us through this book.

Important events for him. Lessons for all.

‘In retrospect, I am really grateful to my family for its decision to move me out of Calcutta more than half a century ago. I wouldn’t have become who I am had I remained there.’

In ‘Bringing the Rainbow’, as with all autobiographies, we sense a bildungsroman. From boyhood to his businessmen years, the book clearly chronicles RK Somany’s growth. But if you pay attention to the teller, the tale makes you privy to pivotal points of time in his life which stand out as peaks. His early days reveal how the psychology of this second youngest sibling evolved, as a ‘fierce determination’ was born over fighting for a mere chance to play. Private tutors would teach his siblings and he would sit around, listening.  Learning. A ‘template for my behavioral responses to adversity’ was created as violent and economically stressed historical eras unfolded. In him also developed a streak of individuality away from his brothers’ footsteps - to become a graduate even as he helped his family in business!

It was the physically taxing days spent in England which helped him learn the ropes of the ceramic industry. The discomfort and ‘enforced thrift’ of those times led to a success which comes when one is ‘in the thick of action’.  The aim always remained to provide world class products at Indian consumer prices, and not compromise on customer goodwill because of the more profitable black-marketing. Trysts with Jaycees and the Rotary Club brought out the public leader in him. Exposure to the differences between workers in England and India made him understand and deal with labour strikes too.

An eye-opening event was that of buying back his own brand at a high price from a Chinese company, which was using it. Hindware’s wings had spread and problems were fast increasing. ‘The big boys of the global sanitaryware industry soon entered the Indian market.’ Often, the obstacles were political, like he found out when the sales tax department of Govt of Haryana raided his plant. Countless such important events in his life left him learning and unlearning, and leave us doing the same too.

‘I am humble enough to know that I do not have all the answers. The HSIL board comprises men of rare distinctions. It would be foolish not to leverage and take advantage of their combined wisdom. This is simple common sense…’

The voice.  The person.

The straightforwardness with which the story is told makes RK Somany seem a friend by the time we finish reading. And we his confidants! No, there are no sensational revelations eager to please the reader. But there are many moments where the already-thin guard of autobiographies is down, and where the narrator truly shows himself in flesh and blood.

You sense relief when he says his family was ‘without any choking orthodoxy’, and gratitude and admiration for his brother when he says ‘it takes a rare human being to put his own education and possible future on the line to bring up his siblings.’ There is honest admittance of being well-off from the time he was conscious to the time he first signed a cheque for one crore of rupees. No mincing that, because ‘in the tradition of all the great Marwari businessmen I admire, I believe cash is king.’ No mincing either the candid revelations of ‘strains (that) had begun to surface in this united and happy family image we portrayed to the outside world.’ Forgiveness shows when he speaks about his estranged brother Chandra Kumar. ‘I’m sure he has his reasons’ is what Somany leaves it at.

‘To find smuggled products in a government-owned facility in the Pakistan capital was both a cause for shock and delight’, he admits. Regret is visible when he notices that ‘the quality of trade and the people involved in it has deteriorated’ and anger when he says ‘what really gets my goat is the unrestricted import of cheap Chinese sanitaryware.’

There are gaps in the narration too. Hesitance. A mechanical telling not suiting the events. Spaces where there’s less revealed and much concealed and absence of it is conspicuous. For instance, while we know meticulous details of how the business progressed, we barely know anything about the wives, how they felt about his ‘huge personal sacrifices’ of mostly working through the days, or their mysterious deaths. Did he try finding out what happened? Why aren’t we told? Is it because it has no direct bearing on the Hindware story? Is that the reason why his children also occupy a marginal place in this account? What I also missed reading about were the trusted hands like managers  and workers and clerks and guards who probably were an important part of this journey but who have not found space in the book.

‘Being the youngest of the four surviving brothers, my claims were often overridden by the others in favour of their own plans for the companies they ran. It may surprise many readers but this is the way Indian business families operate.’

There’s much that readers will learn about businesses in general and sanitaryware manufacturing, designing and trade in particular from ‘Bringing the Rainbow’. How, first, the idea of sanitaryware needed to be introduced to Indian consumers. How vitreous china which ‘didn’t absorb water even if the product was chipped’ could be marketed. How when competition heated up superior technologies and designs had to be introduced. Why HSIL wasn’t comfortable in giving dealers sole selling agencies, while also visiting dealers of rivals to understand ‘market trends’.  Why a close watch had to be kept on allied sectors. And ‘the one clause that has remained unchanged for 52 years is the one on not allowing dealers to charge more than the MRP – a clause we introduced decades before it became mandatory.’

The book also contains nuggets of information on hunter and sportsmen rifles, the structure of ammunition strong rooms, motors of submersible pumps and goes into angry details of some ‘bizarre laws’!

The book ends in the present, where RK Somany sits talking to us, confessing that ‘I try to teach myself something new every few days.’

His rise, in many ways, signifies India’s post-Independence industrialization drive. ‘Goodwill takes decades to build’ and this book is a glimpse into how it can be. HSIL’s rise, made possible with ‘close supervision, constant innovation, investment in the best technology and strong systems’ is also the journey of a man whose goal ‘was, and remains, to stay ahead of the curve’. This man intends to retire when ‘God retires me.’ But for now ‘I intend to lead HSIL into some new areas.’

A good book for those interested in the Indian business history as well as those who love a good story well told!

'Bringing the Rainbow' by RK Somany is a Maven Rupa Publication, 2016

[Review was commissioned by the PR Agency. Views are my own.]