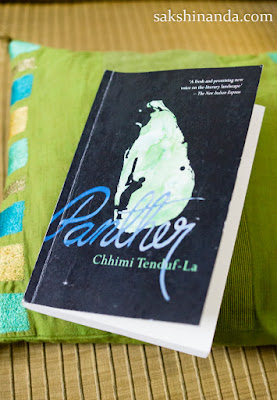 Chhimi Tenduf-La, in the Author’s Note to ‘Panther’, clarifies that the Sri Lanka of his latest novel is highly invented. He says that in reality the students are disciplined, the educational standards are good, the people are peace-loving and most importantly his depiction of war in this otherwise culturally rich country totally ‘fictitious’. He insists that ‘there are some bad people in this book. Very bad. This is fiction.’ We can’t question him. But we can ask ourselves…

Why then has he placed his characters in Sri Lanka, in a book where cricket and childhood are so disturbingly married to war and terrorist training camps that every time you stand at ease while reading, you are straightened into attention on the next page? Yes, Chhimi lives there and he knows the country. He could simply be appropriating the surroundings to suit his novel’s needs. Fair enough! However, a reader anywhere in the world too is well aware of Sri Lanka’s context - its politics and history and cricket – and certainly enough to not swallow this novel’s world as pure fiction. Is this ‘apologia’ then aimed at escaping censure? Or, is this a clever way of shrouding in fiction a reality which news coverage of wars has yet to show us? He’s got us thinking even before we’ve begun reading!

‘Panther’ is the story of a Tamil boy who is ‘of the name Prabhu and I love cricket, athletics, reading books, and listen for the music. Thank a lots for your greet me.’ He survives a war, accepts his family is dead, and continues to ‘bat like God’. He gets accepted into an elite international school on a cricket scholarship. Except, this is only conditional freedom, for he has to perform well. (Else, he goes back to a dangerous life.) Incredible Indika, handsome, hunky and Sinhalese becomes this Prabhu’s ‘brother’, introducing him to a world of girls and arrack and starry hotels - so far removed from Prabhu’s origins that apart from surviving the Supreme Leader of his camp, Prabhu is now to survive the duality of his life too.

The novel takes you into thick jungles where, when you hear a twig snap it ‘could be animal. Could be man. Likely, if man, to be man with gun’ and also shows you plush homes of those not pushed into training to be martyrs. An unknown first-person narrator makes an appearance every few chapters, watching as if from the skies. Prabhu’s Amma? Sister? God? Can’t say who. Not even when the novel, after a breath-taking spiral, reaches its final end.

Some aspects make ‘Panther’ a strong narrative on wars, any war anywhere in the world, where there are children living through it even long after it is over. It is these which make this book much more powerful than the blurb attempts to reveal.

‘You have memories that are locked. Memories that come out when you are pushed.
Memories no kid should have.
It’s not your fault.’

Prabhu and Indika’s friendship over cricket is at the heart of the novel, even though one plays to win and the other to survive. In good times, it lends the book a relationship so real you will remember your own times. Prabhu’s wild-eyed idolization of Indika makes him see a ‘protector’ in him. Indika, in turn, finds a tail who would do anything for him. Times test them. Prabhu is ‘younger than you, he’s had no coaching, he’s poor, but he’s taking over your life’ – of cricket and girls, and Indika is upset to hear that. On the other hand, Prabhu has gradually faced racism at his hands, ‘you look down to me thinking I am stupid, because I do not know so much the ways of behave in a city.’ Their friendship has to weather many storms, including those which follow a war.

You wish they did not merge to become one never-ending scar, but war and childhood do. ‘Panther’ is a heart-wrenching portrayal of this deadly union. War ends with its ‘cold call asking Tamils to serve the community’; uses fathers and mothers, converting waffle-makers into army spies and children into traumatized orphans, sitting in a camp where you ‘sweat till your muddy t-shirt is drenched, but still your teeth chatter. You shiver. It’s fear, it’s sadness, it’s anger. You’re helpless.’ And then some boy is ‘in the jungle. A friggin’ jungle cat. Cradling an AK-47. No sweat on your palms. Combat…But …you remember this is no game. No walk in the park. And you want to call out for Tarzan, for Appa, for Amma, for Akka, but…’ War converts. Kills children and makes killers of those who survive.

The aftermath of War sneaks into the city, and Prabhu is blacker than the Sinhalese, he is made to realize. ‘Sledging is wasted on Prabhu. He’d heard worse’ but there is no one to trust, and that betrayal is what breaks his child-heart. We want to shake Prabhu away from the ‘mission’ that he prepares for. Save him from sodomy. Give him his childhood back, ‘the way it should be’. Because Chhimi creates a character who we want to protect like our own child.  Till Prabhu is made to grow up as if in one moment:

What does war do to children? It plays havoc with their lives, forcing them into roles, messing with their relationships, scaring away their sanity and snatching away their identities, for life.

Prabhu is oblivious of his facelessness, till he has to face it. Prabhu’s identity is forever being created and broken apart. It all depends on where he is…

‘Hit the bloody thing or no dinner.
You’re hungry. Starving. Famished. So you pivot on your heel and hook the next ball.’

Prabhu bats like no one else in his camp because he has to. He sees a ball to hit and hits it. Even imagines they ‘are Sinhalese testicles’ because he is being asked to. He’s an urban Tamil Panther first, and cricketer later.

His cricketing prowess makes Coach Silva welcome him ‘like one of us’. Like a Tamil. The school wants him to play international, after all! Prabhu is now cricketer first, Tamil later.  But only till he bats like God. Otherwise –

‘That’s what you Tamils in Colombo want. Be a part of us then make us lose. Make us smile. Make us cry. Make us look foolish to the outside world. We’ll never give you your own bloody land, so you want to contaminate ours.’

Prabhu is Tamil; the red of the cricket ball on his hands forever being mistaken for blood. It is this identity that decides everything in a post-war Sri Lanka. And that is what makes ‘Panther’ a socio-politically relevant book. It cannot change for Prabhu, even if his combat uniform changes for the school cricket team’s. ‘His mission … to survive’ is true for both his “training camps”. Prabhu realizes it too and the level of racist rudeness Chhimi gives some of the characters in the book is enraging. Finally, he is forced to long for ‘my home, home. Where I am same as others.’ But does it matter to Prabhu, this Tamil identity, more than, say, his friendship with Indika? Does it to Indika? In the answer to this question lies the beauty of this otherwise saddening book. Therein also lies the bit about childhood that no war can steal.

Chhimi’s book becomes an important literary text in its rejection of proper sentence construction, and not just in Prabhu’s mouth. The whole book uses a lot of fragmented or one-worded sentences to portray innocence, to make a shocking impact, to endear us to a character, to register a point or to simply leave the reader thinking. Language has also been shown to carry international linguistic influences and naming of people and schools is a loaded activity.

If I were to see his manuscript as a word document, I would see red all over. Chhimi has rebelled against rules of language, consciously, and devised his own rules. In a good way! ‘Panther’ is not a normal story with normal characters you meet every day. Chhimi needed a new way of speaking, altogether, to question wars and politics and racism and the telling of history itself. Even if Chhimi protests, his book is a statement, and one which aligns the voice in it against the atrocities of war. More often than not, it is a child’s voice, with each character speaking in his or her own style and in their own thoughts. That helps make Prabhu ‘much more better’ than most young adults walking in contemporary fiction.

The end was the only disappointing feature of this book, for me. Did Chhimi need to give his poignant story and powerful story-telling a shocking twist, like the ones short-stories hunger after? Or is this his way of saying that some wars never end?  That history is nothing but a past stuck in a present continuous tense? Read, and tell me what you think.

I would call ‘Panther’ a coming-of-age story, except that I realize what we witness in Prabhu’s life is but a fraction of what he must have survived. And also how his relationship with his best (and only?) Sinhalese friend, Indika, evolves is not known beyond the shocking last line. Even when we see ‘a six-foot-two Sinhalese hugging a five-foot-one Tamil’, we know the image is short-lived. Because Chhimi’s ‘Panther’ is not just a story about beginnings and endings. It is about children growing up and childhoods lived in war-torn countries in a continuum. Except, there are no lullabies in this deeply moving story which could be someone’s reality.

No one can see this as purely ‘fictitious’. No one can say the trauma of war is beyond Chhimi’s understanding. A must-read!

[This review was commissioned by the author. Views are my own.]
Posted by Sakshi at 03:57