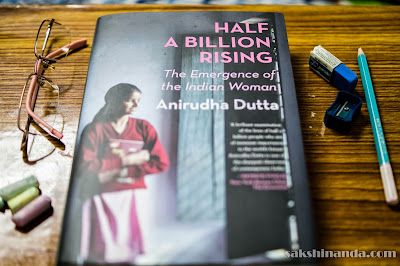 Twenty per cent of the world’s young women live in India and changes in their lives, both socially and economically, are thus of import to the world at large. Yet, we continue a nation of many paradoxes. Anirudha Dutta, before he conceptualized the book ‘Half a Billion Rising; The Emergence of the Indian Woman’, knew that. He also knew that ‘Society it seems is horribly schizophrenic with double standards and this is not a recent development.’

But Anirudha was intrigued, because through global statistics and empirical data, first-hand interviews and ensuing inferences, he was sensing a change. Collecting within the folds of his study examples from the underprivileged to the affluent, Anirudha decided to ‘chronicle the changes, the change drivers and their implications’ for the position of women in India. He wrote this book to make us travel into the lanes of Forbesgunge, Munger, Dimapur, Bhavnagar, Nashik and even cosmopolitan Mumbai and New Delhi, in order to make us meet those girls across strata of society who are collectively a part of this mini-revolution. What also comes through is how different generations are experiencing changing times – first-hand or through their daughters boldly deciding ‘Hum dukaan ja rahey hein’ or aspiring ‘Sirf Harvard hi Jana Hai.’

His aim was one - to understand ‘were women feeling more empowered?’ He answers in bold letters, YES. This gives the book its intent and the underlying note of promise, because while ‘numbers never tell the full story’ people’s voices do. The rise of woman power in India is a work in progress. And ‘Half a Billion Rising’ attempts to show that it is indeed ‘in progress.’

According to Anirudha Dutta the best places to observe how much things are changing – within women and around them - are small towns.

Once a woman in Himachal angrily shooed a camera-wielding him away, but now girls in villages are un-selfconsciously posing for snaps, with many in jeans! ‘They are breaching the mores and boundaries of femininity’, in the most conservative of environments. We are now meeting fathers, like Muskan’s, who will sacrifice anything to educate daughters because ‘Hum Tughlaqi nahin hain’; or husbands like Mehul, who is going to marry not just a woman outside his caste but one who is more educated than him too!

Reluctance to send girls to study in centres run by NGOs is fast vanishing, and private school enrollment in rural India is also increasing. Supriya from 'Vidya and Child' in Noida confirms how almost half the students in their centre are girls. Clearly, schooling is no longer a boys-only privilege.

You will meet Daksha, daughter of a chowkidar, who tells us how her ‘life has changed so much that even when I come back very late, anyone can drop me back and my father doesn’t say anything.’ Candid conversations reveal how most of them will insist on working after marriage, and end marriages if they go sour. They are unchaining not just themselves from prejudice but promising to rear their daughters ‘without any shades of being a prisoner of circumstances.’ Deepika, ‘a modern peripatetic Indian’ working in Bengaluru avows ‘I will give her freedom. I will be a friend to her’. This idea of equality translates into another socially important one. Says Priya, a product of NGO Kumari Vikash Prakalp,

Significant odds are being fought and level playing fields sought. Whole communities are feeling the impact. Girls are picking their battles and are ‘mindful that anything she does should not be used as an argument in favour of not educating girls.’ They are expressing, declaring and discussing their desires, and that their numbers – in schools and colleges, workplaces and media – are increasing is helping with the confidence.

Talking about media, notice how condom brands are targeting women as consumers seeking pleasure, and not just birth control? Sanitary napkin companies are asking us to ‘live life’ and gradually is noticeable the ‘emergence of a new kind of woman’ in the movies. I like how Anirudha says ‘the strict silos of good and bad are no longer applicable’ except in Ekta Kapoor’s soaps, which seem bent to feed those diametrically opposed to the liberated, thinking woman’s choices.

And who or what are the change drivers?

The book features many!

Aspirations, in girls who want to succeed despite their circumstances. They are looking ahead with a new-found desire to ‘make it’. Mothers, themselves illiterate and sufferers of patriarchy, are putting a high premium on their daughter’s freedom, supporting them. They realize if the lives of their daughters are going to be any different from their own, it will be because of education, economic independence and the resultant empowerment. Thus, they are becoming the right role models!

But mothers belong to castes and communities. What role does an over-powering society play on liberally inclined minds? Saira, daughter of an auto driver, reveals – ‘I get worried by women sitting in a circle and gossiping. It scares me because I don’t want to end up like that.’ Parents are looking beyond honouring family councils and communal ideas. Nuclearization of families is helping women question traditional social norms.

Who would have thought. but urbanization, in many ways, is acting the great equalizer. Proximity to urbanized localities is giving girls the opportunity to go to neighborhood centres of learning, for one. This in turn is making them find role models in the form of teachers and NGO karyakartas who are intervening with their parents to promote education and open-mindedness. Interestingly, education has a direct impact on marriages. The ‘law of unintended consequences’ is at work when the girl is educated, because it simply means less dowry!

Ambedkar believed villages are cesspools of communalism, casteism, gender injustice and the resultant cruelty. Agrees Anirudha in his book – ‘India lives in its villages but it doesn’t need to continue living there with all the ills as well as deleterious social practices.’ Manisha, a working woman in Delhi, knows – ‘Maybe the spark of rebellion was inside me (in Allahabad) but the release the canvas and the ground for it was provided by the city.’ Shafiq, an auto-driver from Mumbai, is very happy in the city too. Why? Because availability of good quality condoms ensures he has fewer kids and thus he affords his daughter’s education. Amusing, yet so telling!

Infrastructure development in villages, like good roads, is leading to diversified income options. Vidya, from Nanded, a mere 300 km from Hyderabad, did the unimaginable and went to search for a job in that city, alone. Would it have been possible without connectivity? Mobile phones and the internet need to be thanked too

And NGOs building ‘a trust quotient within their ecosystem that is of paramount importance,’ prodding the government to be more responsible.

And what role are men playing? An area of concern.

Questions abound. Is it true that violence against women is increasing because men see their turfs being encroached upon and rather have the women under-educated and disempowered? The power dynamics of gender roles find prominent space in ‘Half a Billion Rising’, because if we look around we realize how ‘the bar of what is acceptable keeps getting lowered.’ While Muskan’s father, Mehul and Shafiq (mentioned above) represent the changing face of patriarchy, there are many more who want to maintain status quo.

Imagine this! A High Court lawyer in Mumbai has reached the conclusion that ‘girls should not be educated. Why? Because today after getting educated girls are coming to the court and asking for a share of paternal property, and divorce.’ Education cannot dent upbringing in some cases, the book will show you. Neither do positions of power, as is evident by statements our ministers regularly make against women’s clothes and habits. Says Farzana, a middle-aged portly lady, for her community – ‘Muslims need a jihad for education. And then another jihad to make sure that the girls start working and stay working.’

In domestic urban settings, the number of stay-at-home-dads is minuscule and attrition of women in work forces remarkably high post kids. The idea of role-reversal frightens men! Tanvi, in her plush flat, tells us how ‘my mother thought that even if my brother did not study much it would be fine since we had a lot of property.’ What was Tanvi told by her father? ‘Do well in studies and we will let you study further. We will give you a certain time frame, otherwise we will get you married off early.’ Tanvi found her drive!

Ours is a ‘country where the exact opposite of any statement is often true’. Anirudha balances his narrative to portray the flip side of the success graph. Statistics reveal how affluent families, thanks to resources, are secretly indulging in female foeticide. The most educated are differentiating between boys and girls. And dowry has only found different names. This brings the discussion back to mindsets, and if they are changing. Over a few pages at this juncture, the author re-examines his whole study in the light of questions - Is education really liberating? Is economic success a step towards gender equality? Or is it universally true that:

‘Lack of money is not the main barrier to adoption (of new ideas), people’s attitudes are.’

However, Anirudha is confident that there is reason to celebrate. The pace of change is accelerating and he has collected first-hand evidence of it to bring it to us. This happy note dominates the book. Why not!

The present continuous tense of the ‘Rising’ women

‘The more I travelled and the more I interviewed girls across the country, the more convinced I was that a monumental change is underway. The change did not start yesterday and it will not end tomorrow.’

Half a billion of us are rising, even as we speak. Stories of courage and progressive rebellion form the soul of this book. Anirudha wonders ‘what at the end of the day is the impact of one small revolution inside one household? Does it change the lives of other girls?’ More importantly, are boys and men changing fast enough to handle the ‘new age Indian woman’? These questions invite us to think.

‘As I transcribed the interviews and thought through my conversations, it was very evident that in the coming decade we will see greater participation of women in the labour force, we will see a more educated work force especially amongst women and these will have far-reaching socio-economic implications … Boys and men will have to respect the changes, accept the changes and adapt to live with the changes. It will be a new normal and will leave many maladjusted and bewildered.’

‘Half a Billion Rising’ is a book which shows a new Indian woman emerging from centuries of patriarchy, whether in tiny lanes or as CEOs of multinational companies. It is time that change is acknowledged and Anirudha Dutta does well to keenly observe, study, understand and document it in this inspiring narrative.

A good read for women, and an important one for men.

'Half a Billion Rising' by Anirudha Dutta is published by Rainlight, Rupa Publications,2015