On Tiger Trails and Travails

Tucked between noisy news of parachuting politicians, noisier roadside shows and noisiest intellectual opinions in 140 characters about both, was a piece of news that made me roar with joy sitting in New Delhi. It said – ‘Good News. Tiger Numbers in India up from 1,400 to 2,226 in 7 Years’.

Good news, indeed, because tigers and I go back in time a long and winding jungle way. You see, I’ve been looking for them since exactly seven years back. And something tells me my heart-felt but unheard call in the wild, ‘Oh show me your face, a paw, the tail or even a whisker, will you please?’ must have echoed in the various Reserves, Sanctuaries and National Parks I honeymooned in. Must have inspired them to multiply. While then not an inch of stripe did I see, in true election-style I hereby snatch credit for making boy tiger meet girl tiger, man tiger meet woman one, and so on and henceforth for hitting this milestone of 2226.

As I sit wondering if it’s time for a second run through the wild, this time with greater chances of meeting the ‘Tiger, tiger burning bright’ (albeit without handshakes and hi-fives, Jai Mata Di) I thought of putting my tiger travail flashback to rest by bellowing about it right here. Yes, I call it a travail because to spot a tiger is like looking for a needle in a haystack where the hay is not just wet but spray-painted silver too.

On the face of it, our jungle sojourns summarized looked something like this: 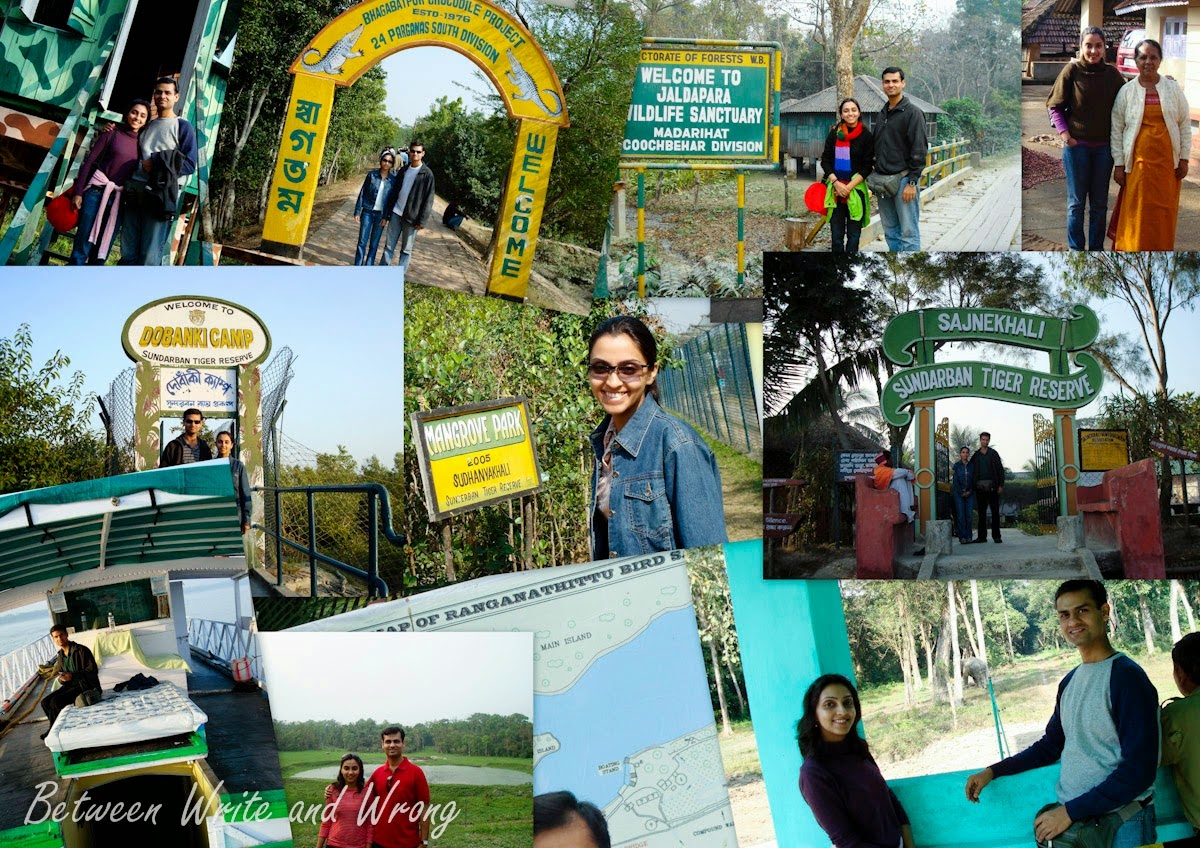 On the face of it.

The greatest thinkers on Facebook warn you that every happy family picture veils a load of sadness (and hen-pecked husbands) behind it. This picture too is that cheery curtain on the stage behind which such misery resides as would make you shudder and sigh. Because, even as we both say ‘cheese!’ in these snaps we had not spotted a single black stripe after visiting the most densely tiger populated habitats and spending hours there. Instead, we could write a thesis on ‘The Cheating Wild Boar; The Grunt that excites as if a Roar’ or ‘Mosquitoes; The Bloody Suckers You Can’t Beat’ or ‘How to Cushion Your Ass against Mud Roads When On a Safari’. A chapter on ‘The Importance of Patience’ picked from sacred texts could be the common one between the three.

Of course, when it first began at Buxa Tiger Reserve I was an uninitiated idiot high on love and love for all things wild. There I stood on the watch tower, excited to know from the beat guard that ‘Any time now, madam, the path behind you will be blessed with a tiger. You can make a wish, it is lucky to spot one.’ With a wish list prepared, mister in tow and khakhi-pants asked to double-check the lock on the gate, we had stood there long enough for migratory birds to have reached South from North, with a lunch break and siesta at the Equator.


Just when we were calling it a day, Jumbo had walked in as if to say ‘I am all that you got, honey. Stay and I’ll spray you with some namak I’m about to eat’. I had said tata to his salt and made my way out of a Reserve which had a tiger in its name but none on its knees four feet, and certainly not for me.


I had pocketed the wish-list I had made at Buxa though, hoping to ask the black-and-orange genie for some material pleasures (which soon enough meant Odomos, and drinking water) but failed to summon the other genie who would call the tiger out for me in the first place.

So, for Sariska National Park we woke up early, really early to have more viewing time. It was cold and misty as we circled the beautiful lake our guide began the tour from. Dear reader, while I may lay the blame for a bursting bladder entirely on the cold, do know that the playfully deceptive whirls of mist in an area teeming with tigers does no good for the enthusiasm and confidence one goes looking for the national animal with. If anything, the mist seems full of evil eyes and with all intentions to pounce at the slightest sound denim makes against denim.


We did see a host of other animals once the sun was up in Sariska, but did we meet The Royal One, snoozing behind the bush or feeding in the grass, swaying his lazy tail at a butterfly or licking her cubs clean? Le Sigh, etc. 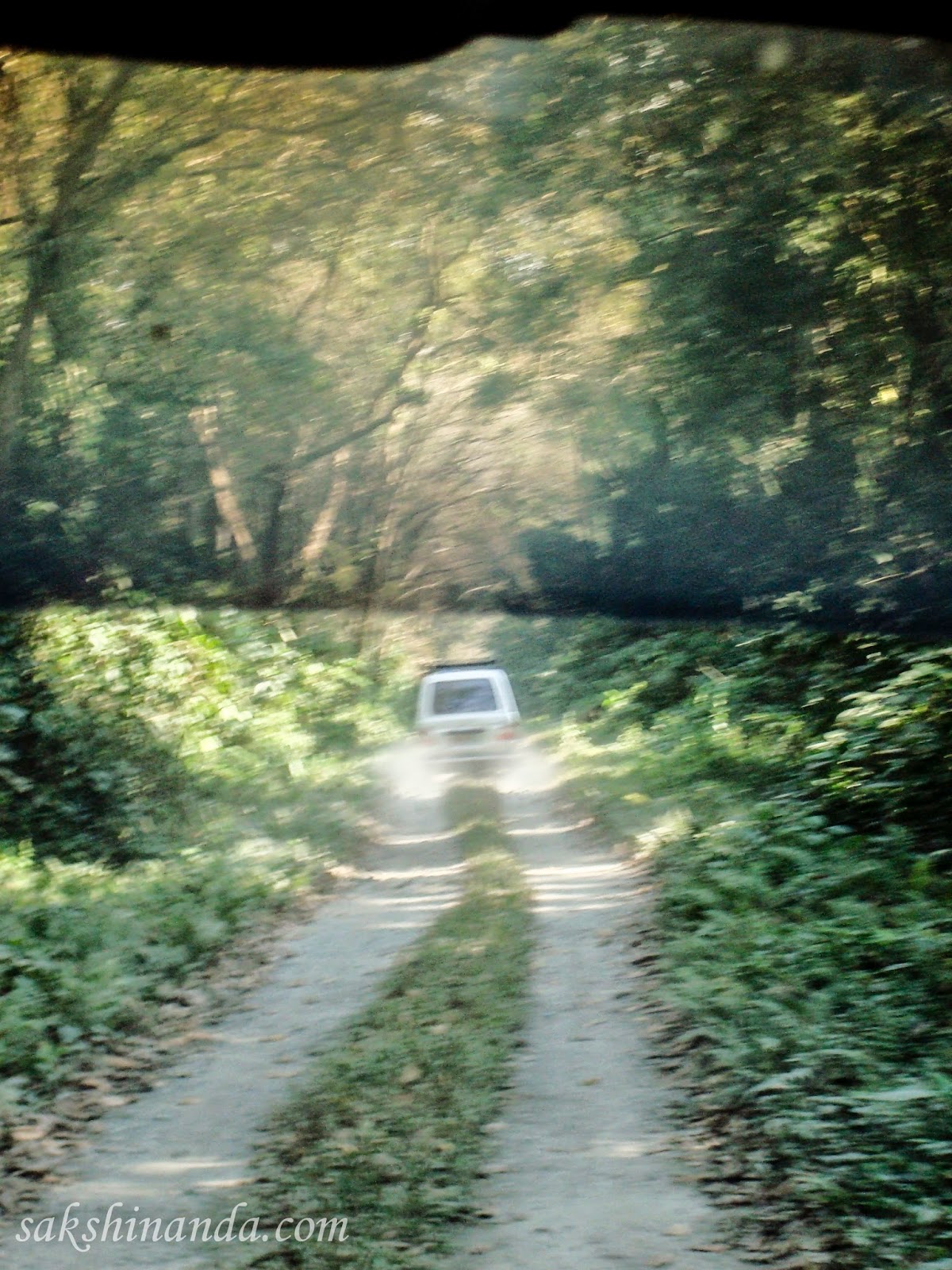 As months went by, I kept myself from Googling the probability of spotting a tiger in the wild. Something told me for the number of hours we had spent in these two widely-apart tiger habitats without spotting one would mean we had been incompetent and undeserving failures. I knew now what we thought was our stomachs grumbling with hunger was indeed a tiger purring in pleasure for having tricked us. That what we brushed off as the play of light-and-shadow on the tall trees or dry grass actually had two eyes staring right back at us.

Oh, if only we had looked harder and not let our rational minds rule supreme.

One day, when I made up my mind to bring home a cub of my own, I heard that we would float around in the Sunderbans for two days to spot tigers and tickle crocs with our propellers. I was ecstatic! I was ready to be robbed of breath at the sight of a majestic Bengal getting his paws dirty in the slush and giving me the looks. Except, I had no idea our room for the night in the middle of nowhere and surrounded by nothing human would be as tall and as wide as a baby's cot. Breathless I slept, breathless I woke up. As for what happened the rest of the time?

No tiger did we ever see, not even the tip of a tail.

Aside - whenever we sit and think back to those days of backpacked wild abandon, even the discomforts and disappointments of those days we miss. There is something so unique in seeing plants and animals and native tribes enjoying their natural homes; with an ease that no other place affords and a sense of belonging that another’s territory can never create. Much like us humans, happiest where the heart is and we know the heart is always at home.

Of course this poetry-in-prose doesn’t mean I am not ready to lock home and go for round two! 1400 has become 2226, the good news, the good news!

Perhaps, next time I will go lusting for wild boars or deer, squirrels or parakeets. Maybe then I will spot a tiger? Who knows how Murphy the Ranger thinks! Some tiger somewhere has to be born to grace my presence with his majestic frame. It cannot be otherwise. It just cannot be.

I'm not dropping my anchor yet. Not just yet! 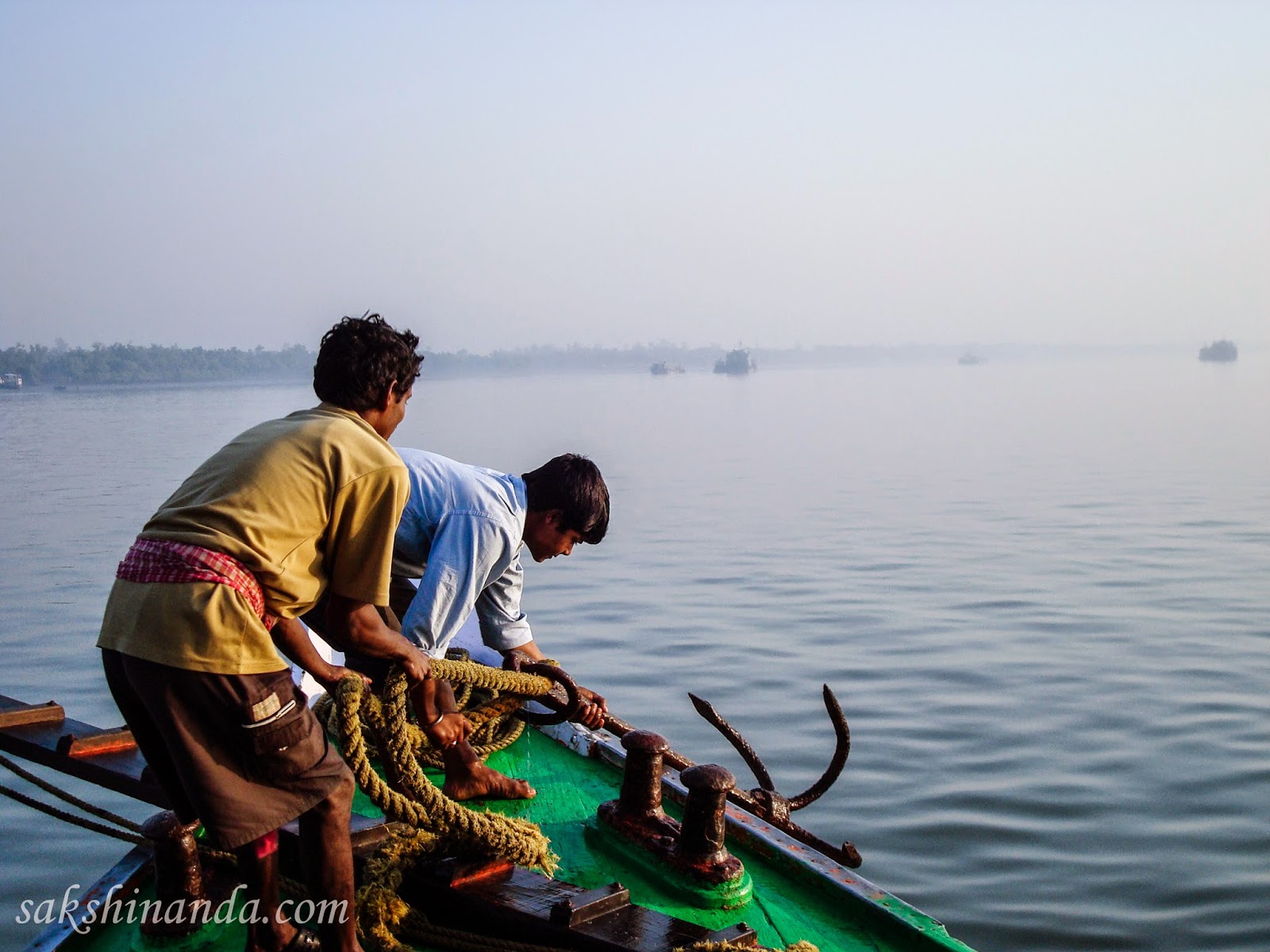