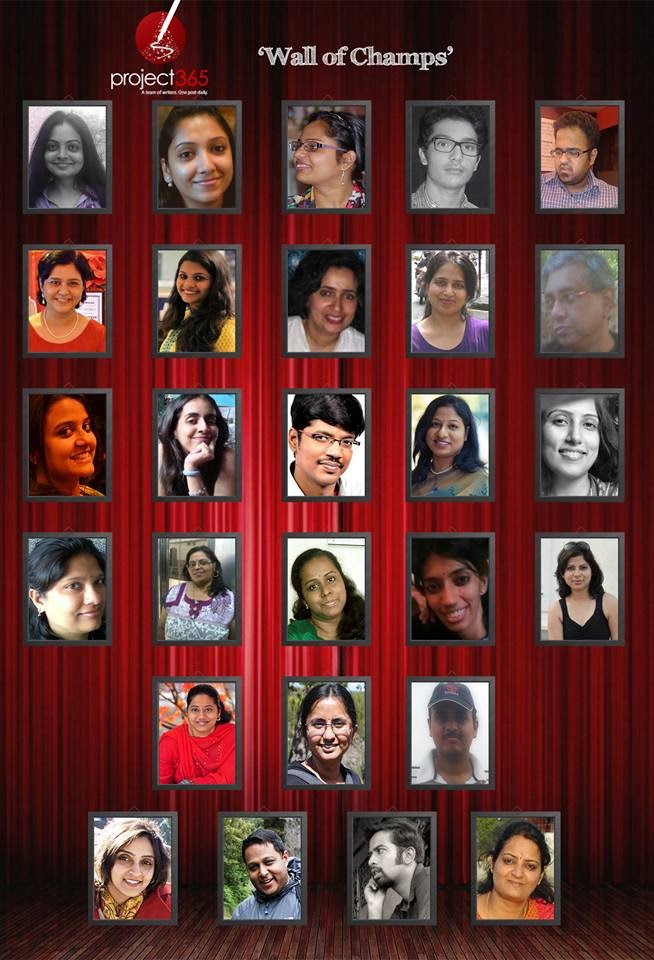 Once upon a time, a stranger called Jairam Mohan sent me a hello on FB messenger. True to his habit, or fearing I may throw my jutti at him, he came straight to the point. He asked me if I wanted to do the Wordpress Daily Prompt; 365 Writing Prompts with him, for the year 2014. ‘Arrey? Na jaan na pehchaan. And he thinks I’ll shake hands with him and just agree to a year’s writing commitment and company? Banda hai kaun yeh?’ I didn’t say that, though I instantly scrounged his FB profile for naked ladies in orgies and worse, bad grammar. While I found neither, I politely told him the task seemed too daunting to me and Wordpress was to a Blogger what an air plane is to a cyclist. I suggested we rope in more people to keep the prompts/month real. He suggested Sid Balachandran, the cutie pie daddy on a parenting site. I had Rekha Dhyani in mind – sane, sober and sensible.

Within hours a group chat formally called Project 365 was buzzing and beeping with to-dos, just a few days before 2013 flipped over to 2014. Various social media accounts had to be set, logos designed, invites for guest authors sent and there was no room for even a susu break in sub-zero temperatures. After the namkaran, we four were now a Core Team, and even though we continued to wear our chaddis under our pants, we knew there was a superhero inside each one of us to have signed up for this. A mad, mad superhero!

Mad, because we were four complete strangers agreeing to be faithful to a shared ‘cause’.

Mad, because between families and friends we now had a bunch of prompts to write on every month for 12 months!

Mad, because who has seen tomorrow let alone a whole year for such a massive commitment made public? Oh, the ignominy if one was to quit. And, the extra prompts!

What led me on, despite my husband’s sweetly strict ‘If you join, you should see this to the finish’? That all four of us had the same aim in mind – to write more and to be read even more than before. It is this that made me feel one with Jai, Rekha and Sid and lay to rest my fears that this was indeed not a plan by South India to take over North India but one of pure and secular brotherhood!

And that’s how it remained …

Our tiny chat box was not just for discussing Guest Author posts, our own late lateef ones, asking Jai to write for unloved Open Prompts or Sid to design the world for Project 365. Between good morning and good night, the tiny window became a place we sought, each one of us, to share personal joys or sorrows, troubles or terrific news, or even gossip piping hot in the vine and consumed like hot potatoes. The ‘seen by everyone’ would excite us suddenly, because it meant we were all four there, despite such different day plans and jobs. Oh, I would go to hell if I revealed what all of who all we chatted about but I will say we rightly named our group chat – Vegas (and the new thread Vegas 2.0, since the first one was creaking under its weight). Vegas - because much was supposed to remain in there, as it does. Superhero swear!

How did the writing go?

Moods oscillated between ‘Oh! I love this prompt’ and ‘Gah! Someone murder Wordpress, please!’ Somewhere in between were moments of ‘Guys, emergency in family/travel plans/writer’s block. Someone exchange my next prompt, please?’ Every month each one hoped it was their turn to pick the prompts first but there was much order-order in all the chatty disorder, and a discipline sincerely followed. The presence of a couple of Guest Authors each month kept us feeling smug about the trust over 20 co-writers reposed in our Project. So, somewhere between gentle-manners and wildness, workaholic-ism and parenthood, vanity and bossiness, we managed the writing quite smoothly.  And not a day out of the 365 was missed! The pride was enough to make us feel glad that we did what we did. We began with adulation for co-writers and ended up with realizing our own niches and sharpening our own skills.

Often, friends seemed surprised at my insistence to write for prompts, or even to continue with a Project that, in their eyes, held little value. There was a belief that this was forced writing, and that creative secretions flow best when there isn’t a topic and an impending deadline. But at the end of the day, we all spent much more time writing than talking about it. Somewhere, those 4-5 prompts a month helped – as an exercise in discipline and one in making us make time for what we claimed to be our passion. Only those who have gone through it will realize its value, but then, just how many can for a whole year? A whole year!

Chaddi out or in, it does feel like a superhero feat. To the Core! 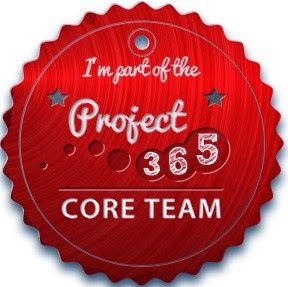 I almost forgot … this is my last prompt post for Project 365. It says ‘You’re a Winner!’ which I am in so many ways. It also tells me that I won $1 billion dollars in the local lottery, asking me how I will spend the money.

Honestly? I’d spend all some of it to fly my Core Team to Vegas, the real one. For who else can I thank for leaving me so much richer by so much writing and such good friends? After all, it's not about who became friends first. It's also about who lasted as buddies right till the end.

[Written for WordPress Daily Prompts : 365 Writing Prompts. The prompt for today was - You’re a Winner - You’ve just won $1 billion dollars in the local lottery. You do not have to pay tax on your winnings. How will you spend the money?]