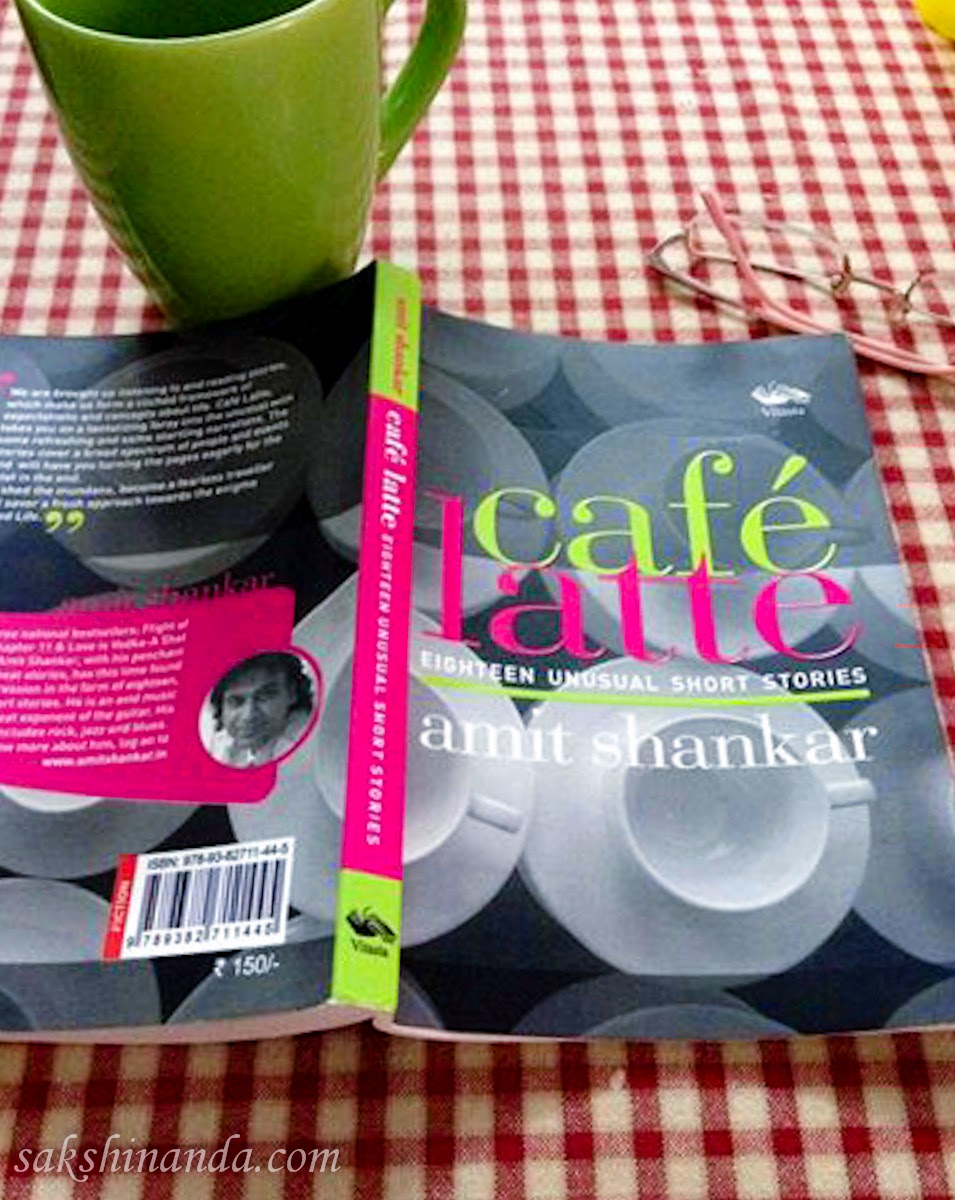 I think when Man first invented short story anthologies it was done keeping this day and age in mind – you know, the quickie-reading era. Short concentration spans, limited reading time and enough to distract us in the world of technology leave us with very little motivation for a long drawn novel. And where are we reading? As much as we like to imagine a French window with white curtains overlooking a Gulmohar tree in full bloom and a teak rocking chair under our derrière with a book in hand, we, dear readers, are reading in air planes and trains, en route offices stuck in jams or while waiting for a coffee date. That is where anthologies come to play an important role, for they expect nothing more than a few minutes of surrendering to a certain author’s story – his ideas, her thoughts, his characters, her twist – before freeing you of the obligation to read any further. And then, variety is called the spice of life for a reason. Don’t you think?

‘Café Latte’ by Amit Shankar is a collection of ‘Eighteen Unusual Short Stories’ from different genres. In the Prologue he himself assures us that this is ‘a very unusual compilation … typing the stories as they happened.’ Spontaneity is indeed apparent in each of the 18 stories, but what is unusual about a select few is not how they have been executed, or how the themes have been rendered. The uniqueness is either a trait of the protagonists or their professions, their reactions or their relationships. Hence, the stories in themselves are not unusual. The subjects of some make them so.

The ones which shook me and stirred me

‘The Black Widow’ kept me awake long after I had called it a day and switched off the lights. I was shaken enough to expect the phone to ring any second and a woman to whisper from the other side. To get a paranormal story to do that to you is tough these days, what with “muses” in the form of Holly-Bolly and a rerun of X-Files on Star World, that too in HD. Amit managed the stories of this genre very well. '26 Down Express’ is another example, where Mr. Gupta’s crazed “You take good care of Tinni. She is a sweet girl” shocked me as much as it did Bikash, the girl’s father. I did not see what was coming even when I was just a millimetre away from it.

I have always believed that while shocks are short lived, the stories which stay with you are the ones which stirred something deeper than your goosebumps. Poignant stories with characters who touch a chord with us carry a universal appeal which surpasses all trappings and techniques of the plot. Three such stories drew me in with their warmth, their unhurried narrative, honesty of thought and the simplicity of the protagonists. ‘Code of Honour’ - a father’s letter to his son from the frontline, ‘The Jazz Player’ – one of the saddest stories I have read in recent times and ‘Home Sweet Home’- with its beautiful expression of old age and the desire to own a home. The ambient detailing of a mother readying her child for school in ‘The Other Side’ was well done. I could smell the roasting oats!

In terms of execution and experimental writing, ‘The Lion, the Leopard and the Hyena’ stood out, as it reminded me of Plato’s dialogues with his student and the power of convincing through question-answer and logic. Also, ‘Every Mouse Ain’t a Mickey Mouse’ for unconventionality of thought as well as an unusual style of narration. (I only wonder why the author used ‘ain’t’, a word no one does here or even there, across the seven seas!)

The ones which fell flat, and why

Some short stories in ‘Café Latte’ just did not live up to the mark set by the aforementioned ones. ‘Temple of the King’ was typical, ‘Let Me Help You Die’ predictable from a mile away, ‘Smart TV’ flat in delivery and effects and ‘A Highway Called Life’ too moral science for my taste, with a moral attached.

I want to mention two overarching problems with the stories in this book:

1. Closures – A recurrent habit that Amit Shankar could do without is making the closures of his stories too explanatory. He will have to believe that the reader is an intelligent animal and that the idea that he is trying to put across has been well received. Unnecessarily putting in so many words the idea behind the story weighs the balance towards ‘tell’ and away from ‘show’, often eating into the effect of the story and leaving a childish after taste. ‘The Chosen One’ is a sweet little story of an interestingly employed young man and the idea of work-life destiny. Except for the way it ends.

2. Language – Simple and spontaneous, for the most part the language suits the style that comes to the author most naturally. However, erroneous “slips of tongue” dotted almost all the stories. Some examples – Beginning sentences with ‘Though/Although’ and using ‘but’ as a conjunction in the same sentence, sentences like ‘I know I have never written you long letters’ and ‘but why to mix drinks?’, vagaries like ‘He was not finding enough air in his lungs’, incorrect syntax like in ‘I tried today also, and…’, and missing words like in ‘What do I gain being a lion?’ Good editing could easily have creased these away.

‘Café Latte’ is not a perfect anthology of short stories. Even as I say that, I wonder if any anthology can be homogeneously and universally satisfying. After all, if there is variety to the stories and genres in the book the same holds true for the kinds of readers and their tastes in the tales too. I will recommend this collection as an accompaniment to your coffee for the simplicity with which Amit Shankar explores and presents the dynamics of human relationships, the conflict-ridden world of jobs, the meaningless of living and the all-powerful idea of loss and death, picking real stories right up from surroundings that you and I share. An entertaining collection.


[This review was commissioned by The Bookaholics. All views are my own.]