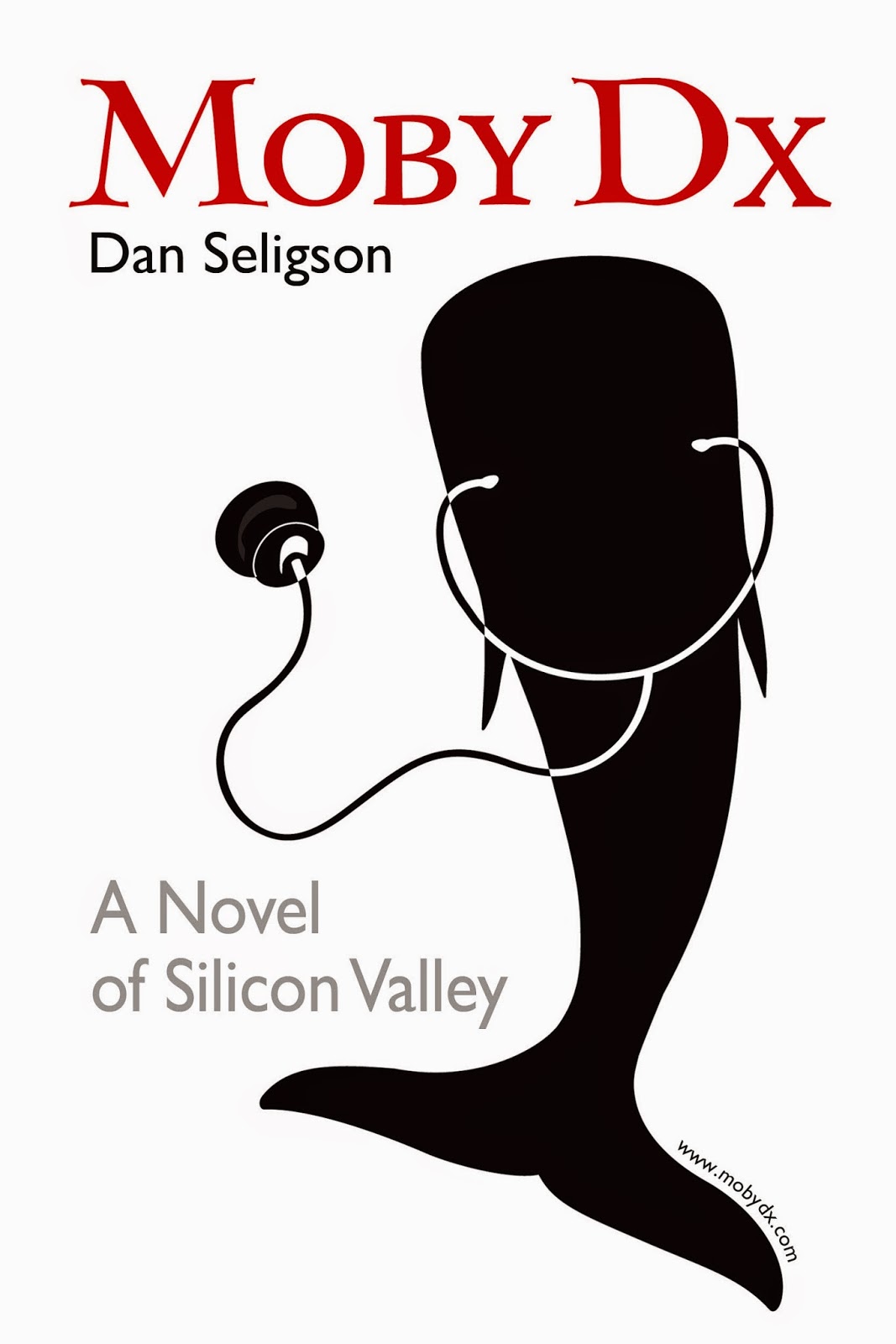 Dan Seligson’s ‘Moby Dx’ is a novel of the Silicon Valley – ‘a place where mooning doesn’t mean teenage pranks or moping, but going to the moon, and maybe further, and not metaphorically.’ It is a place where ‘cakes are delivered by drones … thirty is the new fifty, and singularity is always around the corner’. There is crazy wealth and shadow missions, invention nearly commoditized and start-ups vying to be acquired. And there is genius, of course. Which brings in hubris. A narcissism promoting autonomy in the name of freedom: ‘think what you choose, operate as you choose, spend as you choose’, for there is no rationale for losing. None at all! It is this world that forms the canvas to Dan’s ‘Moby Dx’.

The story begins in different countries with different characters living their lives and times, their loves and losses, their science and brilliance. Continuing as unaware of what their tomorrows hold as we readers vis-à-vis the plot. A mix of circumstances and coincidences bring Max, Lakshmi (the narrator) and Vladik together to work in the field of molecular biology diagnostics and kick-start their company ‘Moby Dx LCC’ towards the millions that this research is worth. (Moby is a bonding of molecular and biology and Dx is an observed correlation between something and patient health.) Apart from a plot thick with sub-stories and characters, the book is generously full of American scientific history, explanation of scientific terms which need be understood to enjoy the novel, methodology of filing patents, share-holding, selling research, corporate intrigue and so on.

I do not exaggerate when I say it is quite like sitting with Jeffrey Archer and Robin Cook at the same table, with Dan doing the talking, that is!

Also, ‘Moby Dx’ is a big book. It crosses 700 pages by quite a margin (and thus the length of this review gets excused!). I gasped too, as I did when I first held Melville’s ‘Moby Dick’, similar in volume, with both books very interestingly intertwined. But Dan Seligson has tried to keep readers interested and involved (even ones like me who turned traitor to all things science and technology and embraced drowning in the world of world Literatures) - through a story vouched as fiction but so real it refuses to be received thus, its style of narration, the unique characterization of Max and the creatively drawn parallels to Melville’s ‘Moby Dick’.

The Story, its Narration and the Narrator

The scenes in ‘Moby Dx’ change like the scenes in a movie. Not as fast, but certainly as varied. At one moment you are swimming with the fish in Macau like a leisurely traveller and in the next sitting in a lab coat, poring over molecular data; from chasing sex in Shanghai and similar pursuits in the Valley, to suicidal protests against failed dreams; from romance in Paris to adding insult-to-injury in billionaire boardrooms. Skilfully enough, the style of narration changes in mood depending on the scene. This helps in keeping the readers involved.

Dan did not intend the plot to be pacey for most part of the book. He could not have, not with the narrator’s informative inputs on science and start-ups. It is how he connects the dots of various sub-plots/sub-stories, spread all over the globe but brought into one place, which keeps the story-line alive and running. It is in the last few chapters that the novel spirals forward, switching from third gear to fifth, as if ‘diving’ fast towards a closure. Masterfully done, and sans any confusion.

Intrigue comes in various flavours and at moot points. For instance, Chapter Two is 10 lines long, three out of which sees the narrator, Lakshmi, say – ‘At first I did it for love, then I did it for a friend, and then for money. I wasn’t doing anything at all when it ended in darkness and blood’. We have no idea what she is talking about, but this is a significant pointer to what is to follow. The mystery is set rolling. And then, in the most unexpected of places you read ‘More about fraud later’ or ‘Can you see where this is going? … patent claims on that structure will ultimately be denied’. There is a constant hint about what is to come, even if it is to come about many chapters later. Suspense is kept breathing throughout!

The narrator plays an interesting role. Lakshmi (half-Indian if I may add), promises to tell us the truth, because otherwise, ‘you’d question the veracity of other elements of this tale, and possibly reject it, reject even me as fiction’. At various points in the book, she addresses us ‘Patient Readers’ directly, as if drawing us away from the main story, for a chat. Such interjections, so reminiscent of Melville’s ‘Moby Dick’, are in a language/tone often in complete contrast to the rest of her narrative voice. Playfully she will read our mind – ‘Disbelieving Reader, I am not making this place up. It’s a real place’ or ‘Dear Reader, are you bored yet? … You thought a start-up was exciting, full of zest and thrill. Alas, not all of it. Before the miracles and shagging, it’s all just slogging’ making us smile in the middle of lots of corporate talk. Even go sassy saying – ‘Dear Reader? Still Awake? It you’re going to be CEO, you have to love these details, or at least be willing to master them. Otherwise, find another job. Find another book if you must. This is the way the sausage is made. Live with it’.

Dan, through Lakshmi, even manages to put in a ‘Generous Reader, think about donating your kidneys on your way out’ somewhere along the narration. Quite like a ‘Sutradhar’ in an Indian play, by some stretch of imagination - the story-teller who address the audience directly and only partially manages to successfully stay an objective teller of the story.

For me, this narrative technique, combined with the story and its style of narration went a long way in keeping this big book gripping and well-connected into an organic whole.

‘Moby Dx’ is full of a plethora of characters, each with his/her unique history, typical characteristics and individual aims. Most, like Jay, Vladik, Arianna and Lakshmi are non-conformists marrying science to life and looking to make a future. But when it comes to the ‘means’ being used to reach an ‘end’, Max stands in direct contrast to those who surround him, always ‘more focused than ever on his needs’.

Max is like a patch-work quilt seamlessly made of myriad traits sown together – some nice, mostly monomaniacal. Perhaps, Dan’s idea was to create that one Mercurial Man representative of various facets of Silicon Valley put together, including the ‘repressor gene for fashion’? A character created such that he floors with his ‘fevered intellect’, puts-off with his egoism, amazes with his resilience, tires with his sexcapades, exasperates with his temper and shocks with his self-interest. All this, even as a sense of search-for-self surrounds him most of the time, like an Icarus, frustrated by the extent of his own dreams, or lack of genius surrounding him. And for a man who ‘hated the structure, the processes, the rules … didn’t want to have to convince a board, a team…he wanted to be the decider’, you either think daredevil or you think an autocrat. He abandoned those who failed, took credit away from those who did not. But here comes the interesting bit - you just can’t get enough of him!

Like Arianna says for him – ‘He sweeps you along in his what? His wake? He sweeps you along and you become a willing participant without knowing it’, even as he plots ‘to pwn’ his own friends. No surprise then that Jay and Vladik seem to have been created as clear foils to Max.

Max, or should we call him a modern day Ahab?

What may be seen as problems

… or questions in other readers’ minds too!

1. It’s a whale-of-a-book. Even as the narrator addresses us Dear Readers off and on, apologizing for the pages-upon-pages of history of modern biology, will the book hold interest for those who find science and start-ups not-so-intriguing? I enjoyed that, but will everyone, especially in parts where the plot becomes background and a class room feel comes to the fore?
2. The line of suspense around D2 was dispelled too flatly. I thought that was a great thread in the making.
3.  ‘Froodenstein’ seemed mysterious but did not live up to the no-Slabs no-notes secrecy surrounding it. Maybe Part II?
4. The ‘tying up’ of Moby Dx, the company, seemed too sudden compared to the effort that went into starting it. Perhaps, by now the focus was on the main characters, a looking inward?

… after a thought which refuses to part.

Does Dan Seligson manage to stand separate from his narrator, Lakshmi, or does his own background as one from Silicon Valley bear upon the narrator’s independent voice? Is it Dan talking when Lakshmi says to us in the first paragraph of the book – ‘Every bit of it is true. What I didn’t experience firsthand, I’ve learned from others who did. What they couldn’t tell me, I’ve imagined.’ Is this book, then, somewhere between fact and fiction?

Lakshmi (and the book) talks about competition and intrigue, scandal and Internet, dotcoms and genomics bubbles, and sequencing. ‘The folktale got taller and taller. Some readers inferred that much of medicine would be solved once human genome was finally sequenced. Even some scientists were fooled. Certainly the public was fooled’ seems like Dan’s comment on contemporary research in the field. The changing face of Gili Trawangan in Indonesia over the years of the novel, and the nostalgic pathos one senses in Max’s observations on dying coral, disappearing turtles and burgeoning real estate in the once-untouched island seems like Dan again, reflecting on the downside of ‘progress’. I could be imagining all this, but then, maybe not?

Finally, putting his ‘Moby Dx’, a Silicon Valley novel in a petridish metaphorically adjacent to Melville’s ‘Moby Dick’, Dan has managed to create a contemporary saga traversing many decades of modern biological research, the monomaniacs behind the genius discoveries and the genius discoverers like wet clay in the hands of monomaniacs. The molecular biology diagnostics (Moby Dx) is the white-whale being chased. By the end of the novel, when Max and others have found their closures, Moby must remind you of Melville’s whale, with a message - that ‘it can be as friendly as a baby beluga or malign as an angry beast, its power as the leviathan universally acknowledged’. In the end, at least this ‘would-be leviathan, was beached’.

As for the ones still swimming in the laboratories around Silicon Valley, only Dan Seligson can say!


Title: Moby Dx
Author: Dan Seligson blogs about the book and other silicon valley novels at blog.mobydx.com, and tweets at twitter.com/mlvlvr.
Order the e-book or pre-order the print edition at gum.co/mobydx. Readers of this review can get a discount through August 1 by entering the coupon code 'sakshi' at the time of checkout

[This review was commissioned by Verbinden Communications, Bangalore. All views are my own.]