In the small town

I come from a small town which grew to become a small city soon as it was declared the capital of a new-born hill State. More concrete, better roads, mushrooming universities, traffic lights, McDonalds and Pizza Hut, and even a little pub came rushing in to take their place. Month-after-month, our small town morphed into something beyond recognition and imagination. What was once called a retired hamlet downing shutters by 8 pm and going to sleep by 10 was now buzzing with ice-cream eating pan-enjoying janta even in the middle of the night. The old town became a young city – even as the elders blinked their age-old eyes awake and the young rejoiced at more-things-to-do whenever they came home on a break. The town grew, indeed! 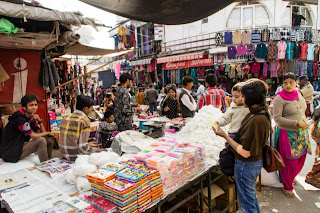 Dictionary explains ‘Mentality’ as a habitual or characteristic mental attitude that determines how you will interpret and respond to situations - which engineers your adaptability to newness and your actions and reactions to all things foreign. As I saw Dehradun become unrecognizable, I realized how the mentality of the residents moulded itself to something so different too. More people were eating out and partying as gourmet restaurants opened their doors to them. A lot more girls and boys were hanging out together and a lot less parents frowning at that, thanks to comfortable and safe coffee shops dotting the city. With the latest designer brands came fashionable transformations of the young and old alike. In short – what I saw was a mentality gradually opening up its arms to outside forces (even if you want to call them forces of consumerism) and warming up to the changes of lifestyle and thinking that winds from bigger cities brought with them. Today, after more than a decade of becoming a capital – Dehradun is no longer just resting on rocking chairs in green verandahs, sipping tea and having pakoras. It is also learning to do and getting to accept things and ideas which form an integral part of growing with the times. Fear of unknown frontiers outside the city limits have been cast away, and a spirit of enterprise has come seeping in along with students and businesses from all over the country. And this small town’s mentality? As flexible and as forward-looking as it has always been. The town not just grew, it grew up too.

In the big city

Now, take the 7-hours-long journey and come to New Delhi – a city that is not just big, but a metro since forever. Political capital, land of opportunity, central university, and what-not. It never sleeps, and then wakes up late on weekends. Its fast and maddening, yet fulfilling too. There is so much to do and enjoy, and equally more to look forward to another day. It is a grown-up city teeming with energy and life, all kinds. It seems many developed years ahead of Dehra Dun and its times. But what about its mind?

In the last 13 years, I have heard a universalised definition of ‘Small town mentality’ far too many times from the cosmopolitan. Of course, directed at my kind who were born in tiny nursing homes in tinier towns. And every time I hear these 3 words, the usage bothers me. The term is used to explain everything that riddles the city - from lawlessness and indiscipline to promiscuity and immorality, from gossiping and communalism, to even excessive hospitality. Am I imagining the condescending tone in the voice which pronounces certain people’s mentality as small town, which hurts me? Am I reading too much when I see it as disrespectful towards my home town and all the people living there? Maybe underlying this not-so-veiled derisive tag is an idea of one-up-man-ship over someone who grew up in smaller places by those belonging to bigger ones? Strange, this labelling, which in the best of times seems to be coming from an incipient prejudice and in the worst with the intention of "othering" what is everyone's evil.

One never talks about a ‘big city mentality’. Why is that? Are not residents of such cities equally responding to situations and interpreting them with characteristic traits acquired? Or is it because small town-ers coming into big cities have far more to take in and assimilate than those who need not leave their homes in big cities for greener pastures elsewhere? Maybe they are too many too busy to even know their neighbours, so shoe-boxing them under a certain umbrella of mentality is near impossible. Where as in a small town, we can easily fit everyone into one parade ground, ignoring all ideas of uniqueness and individualism which actually exist in equal quantities, everywhere.

My experience of ‘small town mentality’? Openness to accept change with newer influences, albeit carefully and sure-footedly. Being interested in how much milk your neighbour procures, yet knowing that does not make him any different from you. Holding on to your children, their studies, your gardens and your pets with hoops of steel, but going all out to support the stranger on the road when he needs help for his own. Going to the market ready to bump into 10 people you know, yet knowing how to show a pleasant surprise and a happy smile, all 10 times. Going to the plush mall to enjoy the festivities while yet not forgetting your family jeweller, doctor, kirana shop, tailor because good will and loyalty took longer to build than that mall. That is called small town mentality, and rightly so, since most big cities leave you hungering for most of these.
I have no real answers which explain the ridiculous and ridiculing usage of ‘small town mentality’ that I have witnessed over the years. If I did, this post would have had less question marks than it does. I can only explain this post as one stemming from deep loyalty for my fellow small town-ers, a loyalty that is an intrinsic part of this 'small town mentality' we speak of. I do make a mental note that perhaps there is indeed a ‘big city mentality’ too, which exposes itself most when it tries to explain any kind of different-from-its-own behaviour as ‘small town mentality’. And it does neither party any good.

So, in the spirit of a true-blue small town-er who grew up living with a community as a whole and feeling of oneness even with strangers on the road, I will erase that note instantly from my mind. Shadow lines of difference need never see the light of the day!

While my home-town remains the dearest dot on the map to me, I do thank this big city that I call home today - for having taught me not just how to live but also how to survive.